Janet, the mysterious airline that serves Area 51, is hiring. Applicants with top-secret clearance are preferred

Janet, the mysterious airline that serves Area 51, is hiring. Applicants with top-secret clearance are preferred

You can’t buy tickets on Janet. You can’t visit the hangar. But if you’re the right candidate, you might just be able to serve coffee on board

by Richard Warnica, published on National Post, on January 10, 2018 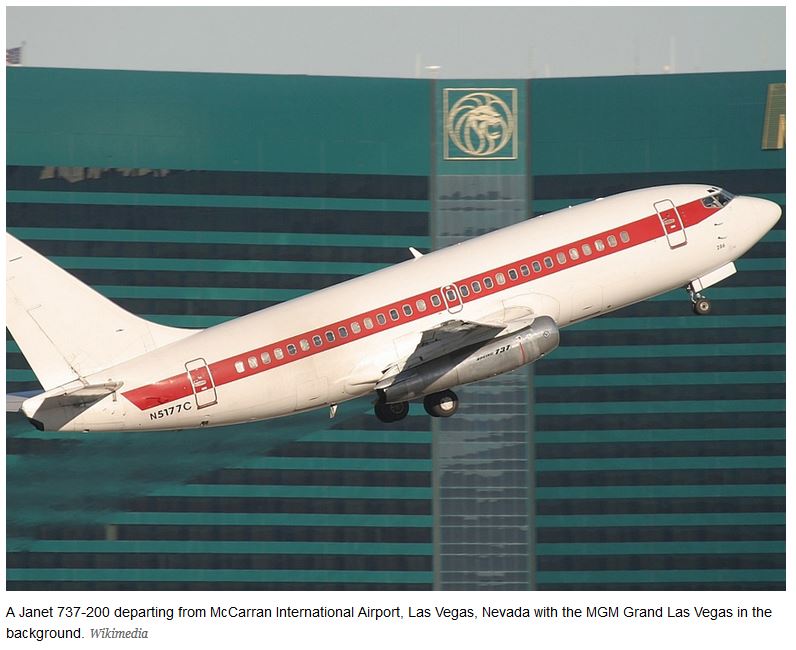 Janet Flight 211 leaves McCarran International Airport, in Las Vegas, most mornings at about 3:38 a.m. It operates in an unlabeled Boeing 737-600 aircraft with no markings on its tail and no logos on its chest. Instead, it bears only a long, unbroken red stripe on either side of its body.

Janet 211’s destination, like all Janet flights, is officially listed as the Tonopah Test Range, a military instillation in the Nevada desert. But according to flight trackers and obsessives, its real destination is  Groom Lake, home to the mysterious military site known as Area 51.

Janet is the call sign for what is essentially Area 51’s employee shuttle. Employees and contractors are flown in and out of the gigantic, conspiracy-laden complex multiple times a day from a private terminal at the Las Vegas airport.

Janet operates six Boeing 737s and a handful of smaller prop planes. As of October, it was running between 13 and 16 round-trip flights a day to Groom Lake alone, according to the Dreamland Resort, a website that obsessively chronicles all things Area 51. The service does also fly to the Tonopah Test Range, as well as an archipelago of other highly classified military sites in the Southwest. But it became famous as the Area 51 shuttle.

You can’t buy tickets on Janet. You can’t visit the hangar. But if you’re the right candidate, you might just be able to serve coffee on board.

Aecom, the massive military subcontractor that operates Janet, is hiring a flight attendant.

A posting on the company’s website says the organization is seeking a “level-headed and clear-thinking” individual, preferably with “top-secret government clearance,” to perform, among other tasks, “light cleaning of aircraft interiors.” Candidates should have at minimum a high school education, and be able to coolly handle “unusual incidents,” like “hijackings or bomb threats.”

The posting never specifically mentions Janet or Area 51, which is no surprise. But the details of the ad, including the operator, the location (Las Vegas) and the need for top-secret clearance are suggestive, to say the least. David Cenciotti, an expert on military aircraft, reported the Janet posting as fact on the Aviationist, his respected aviation blog, earlier this week. 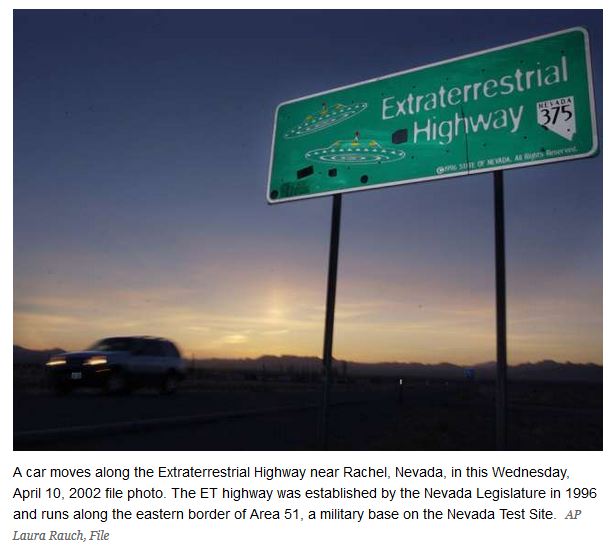 The Janet flights have operated as a kind of unofficial open secret for decades. Thornton “TD” Barnes flew Janet every week to work at Area 51 between 1968 and 1975. He told the Las Vegas Review-Journal that he’d catch a ride Monday morning in Vegas, spend the week working on high-speed radar tracking technology, then fly home Friday night.

The name “Janet,” is often thought to be an acronym, for either “Just Another Non-Existent Terminal” or “Joint Air Network for Employee Transportation.” But Barnes told the Review-Journal the explanation was much simpler: Janet was a person.

According to the Nevada Aerospace Hall of Fame, “Janet” was married to Richard A. Sampson, a senior CIA agent who was in charge of Area 51 between 1969 and 1971. He gave the commuter flights that ferried civilian and military personnel to the test site — then operated by contractor EG&G — the call sign Janet on a “whim.” Eventually, “Janet” became the de facto name for the whole enterprise.

Trevor Paglan, an activist, writer and visual artist, once spent a week in a hotel room overlooking McCarran. He tracked Janet flights in and out of the airport with a telescope, camera and radio scanner.

The workers, he wrote in 2010, would begin pulling in to the parking lot outside the unmarked Janet terminal well before 4 a.m.

“I spied them idling in the waiting area under cold-blue fluorescent lights. In time, a security officer on the far end of the room opened up a door to the runway and the workers filed through, across the tarmac and up a mobile staircase. A stewardess in a dark blue uniform stood there to greet each one of them just before they disappeared into the plane’s fuselage.”

That Stewardess, presumably, had top-secret clearance.

Paglan tracked the destination of most Janet flights by listening in to the chatter of the air traffic controllers on his radio scanner. Some flights did indeed go direct to the Tonopah Test Range. Others were handed off to the unnamed control tower at Groom Lake.

The Vegas-Groom Lake flights only last 25 minutes, according to Dreamland Resort. So in-flight service is likely pretty limited. Flight Attendants on the Vegas-Tonopah Test Range route, on the other hand, could have time to pull out the drink cart at least. That flight lasts a full 40 minutes in the sky.

The McCarran Airport is less than five kilometres from the Las Vegas Strip. So tourists interested in Janet can easily pop down to catch a peek. That’s not to say they see much — just a blank terminal and some weirdly nondescript planes, ferrying staffers in and out every day from one of the most mysterious places in the entire world.

AND below are some handouts for the thousands of indictments nationwide: worldwide: