Congratulations for the people from Catalonia! 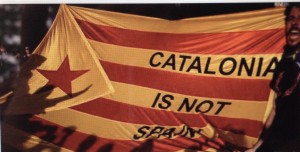 CONGRATULATIONS FOR THE PEOPLE FROM CATALONIA!

The people from Catalonia can survive without the corporal Talmudic demons that form the State: STATE, that by universal law has been dismantled, = Per the OPPT, worldwide. The only state that it is now, and always has been is “original”, meaning each and every individual being responsible for their own being and doing. And or communities working together for the greatest good for their community: their people: their country.

THE STATE IS: ARE BURIED

Congratulations for the people from Catalonia! You have spoken: You have shown that the people are the ones that form government, not corporal-private criminals that have highjacked the way of government from the people with their gang:mob call the police: and so call contractors, = CFR, = corporal marshalls disguising as the lawful government, when the facts are, they are covert terrorism working against the people.

This has been inflicted worldwide to: for our people

The time is now for us the people waking up from the racketeering from these Talmudic demons that only aim has been of: for harming our societies, cultures, our integrity, our health, our wealth, and the murdering of our people.

The Catalonian have lots of work to do…, regardless, do not back down, stand for your lawful-divine giving rights: laws from your creator.

Unite as ONE against THE STATE= DEVIL, = covert terrorism. Also get together and write your own Constitution that will protect your people against invadors!

Take your resources and divide among the people, not for the few that disguise as government. Stand as ONE working for all, this is the greatest force that there is!

Tell King Felipe that his party is over! How can he be speaking of constitution when he is breaking all the laws that apply for protecting the people! Back Stabber, we know who you work with…, traitor!

The people from the unites states of America congratulates all Catalonian!