Michael Bloomberg, a Zionist Corporal Demon on the loose 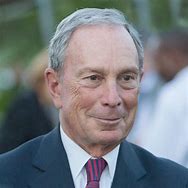 What we Hear: Mike Bloomberg’s Media+ and Al Jazeera Network. We read somewhere that Al Jazeera that is a Qatari state-funded broadcaster in Doha, Qatar, owned by the Al Jazeera Media Network, is partnering with Bloomberg Media from The United Sates.

In case some of you are not aware, Bloomberg media is own by no other than mogul Mike Bloomberg from NEW YORK. Mike Bloomberg, as we all may know was three times a corporal mayor from NEW YORK CITY. Some say that Mike Bloomberg was a great leader during his years as mayor; and we are not going to argue this right now. However, knowing the roots Mike Bloomberg is coming from+ and along with his affiliations, we affirm that Mike Bloomberg et al, is just another mayor giant corporal criminal just as the many that are within NEW YORK CITY+ and NEW YORK STATE. Mike Bloomberg as well has infiltrated= installed offices within all nations around the world with his good doers intentions as that of a savior that comes alarming them about climate change,+ and arranging some kind of health care for everyone,+ and [specifically] that FOR the children.

Imagine that, Mike Bloomberg playing the acting role of savior of mankind. We might as well say, he is the brother of Bill and Melinda Gate, president Xi from China, Barack Obama, Bill Taylor, dude= Fiona Hill, Natalia Jaresko; and the mother of all= Franklin Templeton Investment. With all these blessings upon him, we have no doubt he is a member of the big boys and big girls, Uranium, Drugs and Arms Club. Also known as the Traitors and Invaders Club. Or is it The Energy Vampires Club? With all these, the probabilities are he is an Ocunus Lures Club member as well, and he is most likely caring a Black Berry?

And we forgot mentioning that he sits just about within all the prestigious universities of this country as chairman, and or board of directors. Why not? With all the contributions he gives to staff members, it is obvious! The aim is that they have to develop educational programs that are based on lies+ and brainwashing of the youth, besides covert human trafficking in all forms.

Not that everyone is known of all the above, but regardless, most of these are public records. Nothing is a secret. Nothing.

We also hear that recently, Mike Bloomberg went to the State of Virginia, et al, and just as with the flipped of his finger, he bought any, and or all politicians that he saw fit to carry out his 2020 agenda that is that of disarming all the citizens from Virginia.+ and as well telling them in a indirectly way that in reality they are too stupid to think for themselves, thus screw your laws+ and yours constitution. Further, he gave order to all his suppose journalists from his Media Network, that under any circumstances give any praise to the opposite political party leaders or they would lose their jobs. What he meant to say is= publish lies+ and more lies, and forget about true journalism.

Further, and we wonder, how in the name of greed, has Mike Bloomberg manages accumulating $60 billion of American dollar? This is an unthinkable amount of wealth that under any circumstances is achieve with the salary for being a mayor, and or holding any other well paying job for that matter within any city. Is it not?

By now the American people are very much aware where Mike Bloomberg accumulated all this humungous amount of money, and the answer is obvious= fraud in all forms+ and as well human trafficking+ and malfeasance. This is typical of a Zionist corporal whore. And like this is how all these billionaires from our country+ around the world have managed making theirs fortune.

Oops, and we forgot mentioning as well that Mike Bloomberg for his outstanding achievements was awarded decades ago, the honorary title being the [BOSS] for all the Jewish mafia from New York City, and even within the entire country of ours. We are jaws dropped about such honor!

Which comes to mind, and this is for those that have eyes to see and ears to hear, Mike’s Bloomberg fortune does not belongs to him, not for a second. His fortune belongs to the people that he stole it from, as are the people from the entire New York State, same as those from New Jersey,+ and Connecticut. We the people are vomiting seeing this parasite having even the pretentious audacity running to be a CEO of an allege corporation as that of the USA/US.

Mike Bloomberg, all the doors are closed. Go and jump into the snake pit, where you come from.

And as for Al Jazeera Network, we say, be careful who you hang around with. Your reputation is at stake by the enemy. Do not sell your credibility for a bowl of porridge, as your country Qatar has enough dirt already behind its back, not only with The United States but with the entire planet as well.

CONTINUE reading more about top demon, Mike Bloomberg’s kindness around the world, below. Truly, we are vomiting. ~LFabre

The billionaire’s nonprofit organization Bloomberg Family Foundation has given at least $13,962,000 to Planned Parenthood Federation of America within just four years (2014-2017), according to Foundation Directory Online Data.

Yet this kind of generous giving to one of the premier abortion providers in the U.S. is typical for Bloomberg. The Washington Postpublished an October 24, 2018 piece in what appears to be an attempt to paint the billionaire as a “centrist,” but acknowledged that “He [Bloomberg] sends tens of millions of dollars to Planned Parenthood to protect abortion access.”

LifeSiteNews reported on November 27 that Bloomberg “is one of the most radical pro-abortion politicians in American history. When he first ran for mayor of New York in 2001, he pledged to force everyone training to become an obstetrician or a gynecologist in a city hospital to learn how to perform an abortion.” And with millions in contributions to Planned Parenthood, it looks like he has been putting his money where his mouth is.

He also reportedly told one of his pregnant female employees to “kill it,” after she had informed him of her pregnancy. Is that perhaps why he has been willing to throw massive amounts of cash behind Planned Parenthood?

“Planned Parenthood awarded him [Bloomberg] its Global Citizen Award in 2014 for his pro-abortion record,” LifeSiteNews stated on November 25, “including investments to decriminalize abortion abroad and enacting a ‘gag order’ against pro-life pregnancy centers in New York City.”

In 2014, a press release revealed that the billionaire committed $50 million to “Family Planning 2020 (FP2020), a global collaboration of governments, non-profit organizations, donors and researchers, to ensure that women in the world’s poorest countries have access to family planning information, contraceptives, and services by 2020.”

Family Planning 2020 is a global initiative that works “to enable 120 million more women and girls to use contraceptives by 2020.”