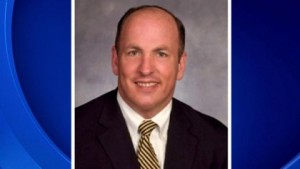 BOSTON (CBS/AP) – Former Massachusetts Sen. Brian Joyce “violated the public’s trust” and “decided to take the path of greed” by using his office for personal profit to accept up to $1 million in bribes and kickbacks in exchange for official actions, federal investigators said Friday.

Joyce, a longtime attorney and Milton Democrat who was arrested Friday, is accused of then hiding that money by creating a shell company and disguising it as “legal fees.”

Federal authorities arrested Joyce, 55, at his Westport home on Friday. Joyce pleaded not guilty to the charges before a federal magistrate in Worcester Friday afternoon.

The 113-count indictment against Joyce, stemming from a two-year investigation, includes charges of racketeering, extortion, wire fraud, conspiracy to defraud the IRS and money laundering. His lawyer, Howard Cooper, said in an email to The Associated Press that he is still reviewing the charges.

The indictment alleges that Joyce secretly profited from his position as state senator by accepting “a stream of concealed bribes and kickbacks” that included a free Jeep and hundreds of pounds of Dunkin Donuts coffee, in exchange for official actions before the state Legislature. He is accused of pressuring state and municipal officials to take official action on government matters.

“He had a duty to serve (his constituents) honestly, and he violated that duty by accepting bribes and kickbacks in exchange for his official action,” Weinreb said.

In February 2016, the FBI and IRS raided Joyce’s Canton law office. Months later, Joyce reportedly sold his Milton home and also sold his family burial plot in Milton, where he grew up.

Joyce is accused of participating in a number of complex schemes dating back to 2010 that netted him hundreds of thousands of dollars and concealing the payments by using his law office as a “money laundering conduit.” Prosecutors say he also lied to the state’s ethics commission and used the panel as a “cloak of legitimacy for his corrupt schemes.”

In one case, prosecutors alleged Joyce used his position to exert influence on behalf of a New York-based energy brokerage business and formed a shell company to collect secret kickbacks from the firm. In another scheme, prosecutors say Joyce pressured the Milton Planning Board to approve a waiver sought by a developer, who gave Joyce a Jeep from one of the developer’s car dealerships.

The indictment also accuses Joyce of taking legislative action to aid a Dunkin Donuts franchise whose owner was paying him tens of thousands of dollars for “purported legal fees” and providing him with hundreds of pounds of free coffee. Investigators allege Joyce took steps to conceal this by submitting backdated checks to the State Ethics Commission and instructed the franchise owner and his relative to falsely represent to the Ethics Commission that they had agreed to provide Joyce coffee in exchange for legal services.

The indictment also alleges that Joyce attempted to use his Senate position to collect money for “legal work” from representatives of a Philadelphia solar company who sought Joyce’s assistance with local permitting and pending legislation.

Joyce is also charged with conspiring to defraud the IRS in connection with his purchase of more than $470,000 in common stock from the energy brokerage firm and falsely reporting the stock purchase as a tax-exempt retirement account rollover in his personal tax return.

Weinreb would not say whether charges would be brought against any of the companies accused to be involved in the schemes but said the investigation remains ongoing.

Joyce, who had served as assistant majority leader, announced last year that he would not seek re-election in 2017. He had represented his district since 1998.

A 1980 graduate of Milton High School, Joyce received a bachelor’s degree from Boston College School of Management and a law degree from Suffolk University Law School.

In 2015, then-Senate President Stan Rosenberg asked the ethics commission to review Joyce’s conduct after The Boston Globe reported on potential conflicts of interest focusing on whether he used his position to boost his law practice.

In an unrelated case last year, Joyce agreed to pay nearly $5,000 to resolve issues raised by state campaign finance regulators, including using campaign funds for his son’s 2014 high school graduation party. Joyce said there had been no finding of wrongdoing on his part in that case.

The arrest is the second blow to the state Senate in the past week.

Rosenberg announced Monday he was stepping aside as president of the chamber during a Senate Ethics Committee investigation into the circumstances surrounding reported sexual misconduct allegations by several men against his husband, Bryon Hefner.

Harriette Chandler, a Worcester Democrat who is serving as acting Senate president, said in a statement about Joyce that she’s confident the “justice system will come to a fair and just conclusion in the days to come.”

“People in public life need to respect the offices they hold and that means not using them for personal gain, and if the feds believe there’s enough there to justify an indictment then the investigation needs to be thorough and move forward accordingly,” Baker said.