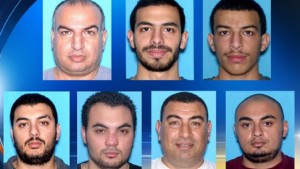 Some people take our freedom to another level. We ask ourselves, if you are giving the gift to be: come to our country the United States, it is obvious that you respect our ways of living+ honor our way of government+ our laws+ our people+ our country.

We most certainly do not need anyone, lets say from China, or the Middle East, or Europe coming here trying to change our believes by imposing their own laws that they brought with them from their country, upon us.  We are sick and tired from Muslims people+ the crypto jews that by the way are the same as Muslims with their intellectual whore evil minds shoving upon us communism+ socialism+ fascism+ zionism+ neozism+ satanism+ oligarchies+ globalism that in truth all= Judaism. Judaism is communism. Take your Sharia Law for example and shove it up your ass+ the crypto jews far as we know can disappear from our country any which way. And we are not being hateful, what we are saying is that we the American people do not need fuckwits like yourselves mocking+ abusing us+ our system for you all have a greedy fuck feast. Hypocrites, even Mohamed if he be alive would spit on your face, same for the crypto jews that even their God Satan cursed them. Be Gone.

AND here you have it, Read More:

“In this instance, eight small convenience stores in South Florida committed a staggering amount of fraud in a relatively short amount of time,” said Karen Citizen-Wilcox, special agent in charge, U.S. Department of Agriculture-Office of the Inspector General, in a release. “These retailers created an illegal benefits exchange system that defrauded the American taxpayer and denied healthy foods to needy children and their families. The store owners who allegedly orchestrated this trafficking scheme pocketed millions in ‘fees’ which they charged for converting food assistance benefits into cash.” Some of the defendants owned, worked at or operated stores authorized to accept Supplemental Nutritional Assistance Program payments, known as SNAP. Others worked at stores not authorized, but allegedly used the point-of-sale terminals for stores that were authorized.

The fraud happened like this, according to authorities: A store clerk swipes a person’s electronic benefits card at a point-of-sale terminal for a large amount. The person with the card is paid a lesser amount in cash. The remainder is ill-gotten profit for the store owner. Saleh managed Four Corners convenience store, 821 NW Sixth St. in Fort Lauderdale, which wasn’t authorized to take SNAP payments. Prosecutors say Saleh and other Four Corners employees used the point-of-sale terminals at Liberty City’s Sparkle, 6530 NW 18th Ave., run by Alobaisi. Prosecutors say that from April 2015 through this past August, Saleh, Alobaisi and employees Francois, Hassouna, Alteen, Jerdana and Baker stole $2 million with the scheme.

Case No. 2 involved Zahran, also known as Youssef Hussein, who worked at Pompano Beach’s Community Food Store, 401 NW 27th Ave. He is being accused of being on the fraud train a relatively short time, Nov. 3, 2016, through Jan. 11. Hajje and Hajyousef owned Steve Market 2 and Yum-Yum’s grocery, stores across the street from each other at 6804 NW 15th Ave. and 6813 NW 15th Ave. in Miami’s Liberty City neighborhood. They allegedly fraudulently acquired $4.2 million. But federal prosecutors give the money title, $10 million, to the Herreras, who also allegedly ran their game longer than everyone else — April 2012 through last month. Andy owned Santa Ana Market II, 1832 NW 17th Ave. in Miami. Father Javier worked there and Santa Ana Market, 3000 NW 12th Ave. Javier has convictions for third-degree grand theft and lottery violations on his rap sheet.