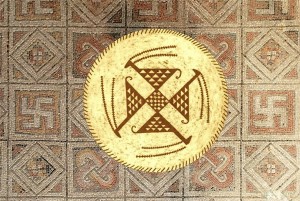 SWASTIKA is a Sanskrit word which means GOODWILL

Below is short history about the Swastika  from the people:

uneel Reddy:
Aryans is not a separate race. Arya in Sanskrit means respectable. All learned Brahmins, kings and scholars were referred by that name. All swastikas found around the world represents that in ancient times every one followed sanathana dharma. There was no religion at that time.

The Tantra is implicit in the Mantra. Well being results and we shall see and hear only that which is auspicious and enjoy life with all our sixteen senses when the leader (Indra) is well famed), the Judge (Poosha) is all knowing, the Law Enforcer (Taarkshya) strikes down evil and the Mentor (Brihaspathi) educates well so blessing us with auspicousness. From this will come Peace, Peace, Peace. This prototypal or fractal Constitution is replicatable from the tiniest tribe to the overarching Grand Chief (or Arya Mihira) of all the tribes under Aryan Law or Varsha.P.S. The Vedas are not “epics” but an orally transmitted compendium of the Aryan experience while the Upanishads are the wisdom distilled therefrom.

The Puranas are mythology and traditional History, often distorted to reconcile and enable the inclusion of various different tradtitions within the Aryan fold. The “auspiciousness” of the Swastika is the promise of the “rule of law” that is enabled by the four institutions mentioned in this Aryan Constitution having the qualities associated with them.

uneel Reddy:
Aryans is not a separate race. Arya in Sanskrit means respectable. All learned Brahmins, kings and scholars were referred by that name. All swastikas found around the world represents that in ancient times every one followed sanathana dharma. There was no religion at that time. 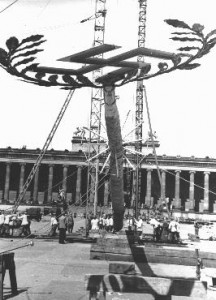 A Maypole topped with a swastika is raised for a May Day parade in the Lustgarten in Berlin. The May holiday became an important celebration in the Nazi calendar. Germany, April 26, 1939.

The swastika has an extensive history. It was used at least 5,000 years before Adolf Hitler designed the Nazi flag. The word swastikacomes from the Sanskrit svastika, which means “good fortune” or “well-being.” The motif (a hooked cross) appears to have first been used in Neolithic Eurasia, perhaps representing the movement of the sun through the sky. To this day it is a sacred symbol in Hinduism, Buddhism, Jainism, and Odinism. It is a common sight on temples or houses in India or Indonesia. Swastikas also have an ancient history in Europe, appearing on artifacts from pre-Christian European cultures.

The symbol experienced a resurgence in the late nineteenth century, following extensive archeological work such as that of the famous archeologist Heinrich Schliemann. Schliemann discovered the hooked cross on the site of ancient Troy. He connected it with similar shapes found on pottery in Germany and speculated that it was a “significant religious symbol of our remote ancestors.”

In the beginning of the twentieth century the swastika was widely used in Europe. It had numerous meanings, the most common being a symbol of good luck and auspiciousness. However, the work of Schliemann soon was taken up by völkisch movements, for whom the swastika was a symbol of “Aryan identity” and German nationalist pride.

This conjecture of Aryan cultural descent of the German people is likely one of the main reasons why the Nazi party formally adopted the swastika or Hakenkreuz (Ger., hooked cross) as its symbol in 1920.  >>>and we quote.