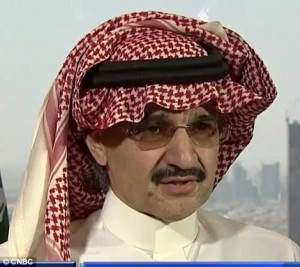 EXCLUSIVE -Saudi princes’ five star prison: Humiliation of Saudi royals as they are photographed sleeping on bare mattresses in luxury hotel after corruption arrests as Trump says they ‘have been milking their country for years!’

Asleep on the floor of their ‘luxury’ five star prison 11 Saudi princes, government ministers and businessmen await their fate following their arrest in the biggest anti-corruption purge of the kingdom’s modern history.

In a photo obtained exclusively by DailyMail.com the men are seen gathered together at the Ritz Carlton Hotel in Riyadh, the Saudi capital, inside one of its glittering function rooms – wrapped in blankets and sleeping on thin mattresses.

Saudi sources say that among those photographed in the room are billionaire investor Prince Al-Waleed bin Talal, who is a nephew of the king, worth an estimated $18 billion and owns stakes in Twitter, Lyft and Citigroup.

The photograph was revealed as President Trump went all-in supporting the man who ordered the mass arrests, Crown prince Mohammed bin Salman, the ferociously ambitious 32-year-old heir to the throne.

In two tweets sent as he prepared to leave Japan for South Korea on a lengthy Asian tour, he said: ‘I have great confidence in King Salman and the Crown Prince of Saudi Arabia, they know exactly what they are doing….

‘….Some of those they are harshly treating have been “milking” their country for years!’

The intervention places the U.S. squarely behind the crown prince and may be partly personally motivated: Prince Al-Waleed was a vocal personal critic of Trump in the run-up to his election.

The photograph of princes on bare mattresses show the depth of their fall. Although DailyMail.com has no way of verifying the claims from inside the closed kingdom, claims that the arrested men were being held at the Ritz Carlton have circulated widely.

Those arrested have been locked in the five star hotel as the sweeping anti-corruption probe ordered by Saudi King Salman’s son, Prince Mohammed  bin Salman, continues. 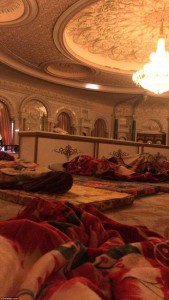 Humiliation: This image, passed to DailyMail.com by sources inside the Saudi government, shows what were some of the country’s most powerful men – sleeping on thin mattresses in the function room of the Ritz Carlton

Previous guest: President Trump stayed at the Ritz Carlton when he visited Saudi Arabia in May, and it was where he met Prince Mohammed bin Salman, who was then deputy crown prince and is now crown prince – and the man behind the ‘anti-corruption’ crackdown 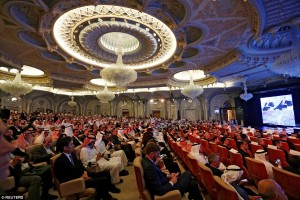 How it was: The men appear to be sleeping in this room, which last month hosted the Future Investment Conference. Among those who used the event to highlight the kingdom’s future was Prince Al-Waleed – who now finds himself sleeping on its floor 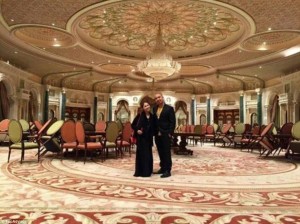 Room like this: A happy vacationer posted this picture of what appears to be the room where the arrested men are being held

He is being held along with 10 other princes and 38 officials following an historic weekend shakeup of the Kingdom’s royal family.

The photo was leaked to DailyMail.com from sources within the Saudi government.

The reshuffling happened as Saudi King Salman swore in new officials to replace those arrested. Rumors swirled the royals were receiving five-star accommodations when the Ritz Carlton was evacuated Saturday.

But our photo shows their sleeping arrangements are far from luxurious – treatment few among the group will be used to.

Ironically they are huddled on the floor of one of the grand function rooms which last month played host to the Future Investment Conference, a gathering of world business leaders which Prince Mohammed used to highlight his commitment to turning Saudi Arabia to ‘moderate Islam’ – and which some of those arrested attended.

Al-Waleed used the conference to speak to CNBC about the flotation of oil giant Saudi Aramco – words which may well be his last in public life.

The hotel also played host to Donald Trump when he visited the kingdom, on his first foreign trip earlier this year, and it was where he met the crown prince.

The arrests that began late Saturday included Prince Miteb bin Abdullah, who for the past four years had led the National Guard, and Prince Adel Fakeih, who was minister of economy since April.

Prince Miteb was once considered a contender for the throne, though he has not been thought of recently as a challenger to Prince Mohammed.

The men were reportedly arrested in a crackdown that the attorney general described as ‘phase one’. 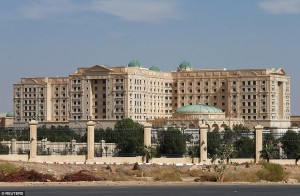 Turned into a ‘prison': The Ritz Carlton in Riyadh was emptied of guests on Saturday night as the round-up of allegedly corrupt ministers and princes got under way

Arrested: Prince Al-Waleed bin Talal, one of the world’s highest-profile investors, and Prince Adel Fakeih, who was minister of economy since April, are being held 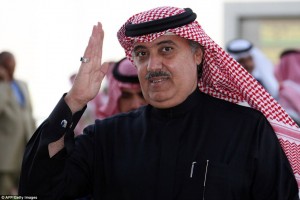 Military man: Prince Miteb bin Abdullah, who for the past four years had led the National Guard, is among those arrested

Another arrest: Nasser bin Aqeel al-Tayyar was president of a large travel group, whose shares plunged

The campaign of arrests lengthens an already daunting list of challenges undertaken by the 32-year-old king since his father, King Salman, ascended the throne in 2015.

Those include going to war in Yemen, cranking up Riyadh’s confrontation with arch-foe Iran and reforming the economy to lessen its reliance on oil.

Both allies and adversaries are quietly astounded that a kingdom once obsessed with stability has acquired such a taste for assertive policy-making.

‘The kingdom is at a crossroads: Its economy has flatlined with low oil prices; the war in Yemen is a quagmire; the blockade of Qatar is a failure; Iranian influence is rampant in Lebanon, Syria and Iraq; and the succession is a question mark,’ wrote ex-CIA official Bruce Riedel for Reuters.

‘It is the most volatile period in Saudi history in over a half-century.’

The crackdown has drawn no public opposition within the kingdom either on the street or on social media.

Many ordinary Saudis applauded the arrests, the latest in a string of domestic and international moves asserting the prince’s authority.

But abroad, critics perceive the purge as further evidence of intolerance from a power-hungry leader keen to stop influential opponents blocking his economic reforms or reversing the expansion of his political clout.

‘The crackdown on even the most constructive criticism – the demand for complete loyalty with a significant ‘or else’ – remains a serious challenge to the crown prince´s desire to be seen as a modern, enlightened leader.’

‘The buck stops at the leader’s door. He is not above the standard he is now setting for the rest of his family, and for the country,’ he wrote in the Washington Post.

The campaign of mass arrests expanded on Monday as a top entrepreneur Nasser bin Aqeel al-Tayyar was reported to have been detained.

Al Tayyar Travel plunged 10 percent in the opening minutes after the company quoted media reports as saying board member Nasser bin Aqeel al-Tayyar had been detained in the anti-corruption drive.

The attorney general said on Monday detainees had been questioned and ‘a great deal of evidence’ had been gathered.

‘Yesterday[Sunday] does not represent the start, but the completion of Phase One of our anti-corruption push,’ Saud al-Mojeb said. Probes were done discreetly ‘to preserve the integrity of the legal proceedings and ensure there was no flight from justice.’