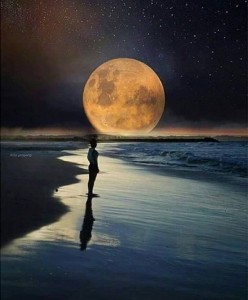 And in case you’re not familiar with the term… A Super Moon is when the Full Moon is in direct alignment with the Sun, and is also at its closest point to Earth due to the Earth’s rotation.

The concept of a “Super Moon” was coined by Richard Nolle, an Astrologer who first came up with the term about 30 years ago!

It’s when the Moon is about 16,000 miles, or 6% closer to the Earth than normal… This sounds rather unusual… But really, “Super Moons” happen several times a year, and the difference in brightness, and size isn’t incredibly noticable to the naked eye.

There is however a size difference, and according to astronomers, the November 16th Super Full Moon will be the closest and brightest Full Moon since 1948… And then the Moon won’t be as close to the Earth as it is now until November 25, 2034!

The Spiritual Meaning of A Super Full Moon

So what is the meaning of a Super Moon from a spiritual perspective?

Essentially… It equates to supercharged Full Moon energies. Which when harnessed correctly can be an immensely positive thing… But can also lead to emotional turmoil, and the surfacing of old issues, drama, etc. Think of it in terms of a really bright light shining towards the Earth… The light is immensely beneficial, but in the process it reveals some of the lower vibrational, darker, and heavy energies that up until this point have been hidden.

But this is not a bad thing!

In fact, this specific upcoming Full Moon is one of the best of the year for emotional healing because of the fact that it is shining a light upon old and heavy energies still lurking in the shadows. It takes revealing what is hidden in the shadows before we’re able to release, transform, neutralize or dissolve these lower vibrational energies.

Alas, beneath the light of the Super Full Moon, expect deep desires, past hurts and wounds, as well as inner callings to rise up to the surface… As a brilliant light exposes where you are in alignment with your highest values… And where you’re not…(This is playing out collectively as well…) The lesson, is to allow what arises to be okay… To love what arises within you, and what is rising up in the world during this powerful time of release and transformation.

And to then let it go…    Loosen your grip…Be, breathe, observe, and allow the energies to heal and empower you.

To align with your true values… And your true self.