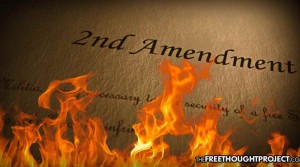 Maxim of Law:
-The law is not to be violated by those in government.
-The law shall not, through the medium of its executive capacity, work a wrong.
-The government is to be subject to the law, for the law makes government.
-The violations, coercion, malfeasance, and subordinations by those that call themselves public servants must cease and desist. We the people are not going to honor vices for virtue
~~~~~~~
August 12, 2019  By Matt Agorist
As politicians and anti-gun rights activists continuously chant, “we don’t want to take your guns,” behind the scenes — in just months — politicians have been working overtime to limit and remove your right to bear arms. These laws all started as a reaction to the tragic shooting in Parkland, Florida last year and with every shooting since, they have sped up. And, like most politicians always do, they are not letting these tragedies go to waste. The problem has gotten so out of control that one US Congressman thinks there may be nothing we can do to stop the gun grabbers from abolishing the entire Second Amendment.

Rep. Adam Kinzinger, R-Ill., told reporters this week that there is a political movement brewing in the US to overturn the Second Amendment in its entirety. Americans would no longer have a right to keep and bear arms.

Despite seeing the writing on the wall, Kinzinger is on board with much of the Republican base in the support of red flag laws.

Citizens who are targeted by these laws will be deemed guilty first and only after their guns are taken, will they have a chance to defend themselves in court. This is the de facto removal of due process and if history is any indicator, they will one day be used to disarm those who disagree with the state.

Under these red flag laws, family members or law enforcement officers can petition a judge to seize firearms from a person they think is a threat to themselves or others. The judge could then hold a hearing without the targeted person being present and grant a temporary order for 14 days.

Under the fifth and fourteenth amendments, due process clauses are in place to act as a safeguard from arbitrary denial of life, liberty, or property by the government outside the sanction of law.

In spite of what officials and the media claim, when a person is stripped of their constitutional rights, albeit temporarily, without being given the chance to make their own case based on what can be entirely arbitrary accusations, this is the removal of due process.

“It is unfair that you would deny somebody a right by putting a restriction in place because… I own an AR. 99.99 percent of us are responsible with these guns. But as a society, we can’t predict individual behavior,” Kinzinger said on “The Daily Briefing,” Wednesday.

Like a true politician, talking out the side of his mouth, Kinzinger then said that these red flag laws and gun restrictions are necessary to appease the gun grabbers because they need to see that something is being done to take guns or they may go after the entire amendment.

“We have to make societal differences and changes… attitudes are turning so much against the Second Amendment that the thing that we risk is that there will be a serious movement to not just create restrictions but to overturn the whole amendment. Now, by the way, your freedom of religion is protected by the First [Amendment]. If we begin to start to repeal the Bill of Rights, who knows where this whole thing goes.”

However, as we have seen, there is no limit to how far politicians will go to disarm the public. Every single year Republicans and Democrats alike pass incremental bits of legislation which continue to erode your right to self defense. Inch by inch, the state is taking a mile and they continue to move faster and faster.

For example, in Kentucky, lawmakers announced red flag legislation that they haven’t even written yet.

Luckily, however, states like Missouri are moving to protect their residents from laws like these by passing legislation to ban gun control laws.

As the Sentinel reported earlier this year, Missouri may have just made the most monumental step towards freedom and individual liberty since the signing of the Bill of Rights. In a 23-10 vote by Missouri’s state senate, the state passed a bill that would nullify ALL Federal gun laws and regulations, and make enforcement of those laws by federal officers within the State of Missouri a criminal offense.

Like it’s predecessor, SB613, Bill SB367 and it’s companion, House Bill HB786, would prevent all state agencies and their employees from enforcing any federal law that infringes the Second Amendment in any way, including gun registrations, fees, fines, licenses and bans. Originally authored in 2014, a former version of the bill was also passed, but vetoed by then Missouri Governor Jay Nixon.

The pro-2nd Amendment legislation leaves no room for error and blatantly refuses to abide by “all federal acts” which set out to stifle an individual’s ability to defend themselves.

According to the Sentinel, many cops were not very happy with the passage of this bill as Missouri law enforcement officials raked in $34,462,153 in forfeitures from 2001 to 2008, according to a report by the Institute of Justice.

The bill is so pro-gun that even the NRA opposed it and attempted to insert language to change it. However, they were unsuccessful and the bill is now moving through the process.

The reason bills like this are so necessary is because laws across the country are being passed en masse to limit your right to self defense. It is indeed a slippery slope. Since the tragic shooting in Florida in February 2018, the Giffords Law Center to Prevent Gun Violence has recorded a whopping 55 new gun control measures in 26 states—in just the first six months of the year.

To show how willing these states are to use these laws, an unprecedented 1,700 orders to seize guns were issued in 2018, likely resulting in the confiscation of thousands of guns. What’s more is the fact that this number is likely far greater because there is no requirement to report these numbers and this data doesn’t include California who has recently implemented some of the most draconian gun laws in the country.

To those who may be in favor of such laws, consider the following: There is no way to stop an estranged spouse from calling police repeatedly and telling them their ex is threatening to cause harm to others.

Anyone, any time, now has the ability to claim someone else is a threat and have police take their guns. One does not need to delve into the multiple ‘what if’ scenarios to see what sort of ominous implications arise from such a practice.

The reactionary nature of disarming Americans because deranged psychopaths kill people is dangerous and only serves to keep the guns out of the hands of law abiding citizens as the above two cases illustrate. Moreover, deranged psychopaths don’t even need guns to cause mass death.

According to a 2015 study, even if all guns were removed from America, in a ten year period, 355 people still would’ve been murdered in mass killings.

From 2006 to 2015, 140 people were murdered by arsonists in mass fires, 104 were stabbed in mass stabbings, and 92 people were beaten to death in mass killings. To reiterate, these are deaths in which four or more people were killed.

“People sufficiently enraged to commit such crimes may also be motivated to find other ways,” criminologist James Alan Fox of Northeastern University points out.

Luckily, Missouri politicians seem to grasp the notion that the only thing that stops a bad guy with a gun, is a good guy with a gun. Now, if they could stop raiding cancer patients in the hospital for treating their illnesses with a plant, that would be another giant step forward.