Re: Your article titled “There’s No Las Vegas Link To Fairport Murder-Suicide”

I am writing to you today to express my religious organizations displeasure at your publishing an extremely distorted article about us that violates one of the most basic tenets of journalism ethics set forth by the Society of Professional Journalists that says: “Diligently seek subjects of news coverage to allow them to respond to criticism or allegations of wrongdoing.”

Your blatant failure to abide by this most basic tenet of journalist ethics is evidenced in your 11 October 2017 article titled “There’s No Las Vegas Link To Fairport Murder-Suicide” wherein you stated about our report titled “Las Vegas Massacre Witness Kills Self And Daughter After FBI Raid—As Missing Piglets Search Continues” that we used “shoddy and fictitious sourcing” to employ “half-truths and bewildering leaps of logic” that you claim “are trademarks of [our] reporting”—but that you didn’t afford us the opportunity to respond to in any way whatsoever prior to your publishing it.

Even worse, in your article you further state that websites like our are “known to publish schlock and sensational disinformation for the purpose of profiting through clickbait”—which is a discrediting tactic employed by all “real news” American journalists, such as yourself, whose writing standards are governed by the April, 1967, CIA memo that instructs you how to attack those like us—in this case, and as the CIA instructs you to do: “Accuse theorists of having financial interests in promoting conspiracy theories.”

Your exactly following the CIA’s discrediting “playbook” in this article, also, saw you outrageously calling the readers of our report “unsophisticated news illiterates whose reality is so muddied they can’t tell truth from fiction anymore”, and that you claimed was “sad and dangerous and undermining our institutions”—but your offering absolutely no evidence to support these shameful, and truly demeaning, assertions as being true.

By your stating in your article that our “story has been spread like wildfire on social media”, too, you fail to notice that this is true because the American people are fed up with being lied to by “real news” journalists such as yourself—and who have yet to explain the atrocities committed on 11 September 2001, most specifically how a supposed plane crashed into the Pentagon leaving no evidence behind—and that by your failure to tell the truth about is an assault on the 22 families in your community who lost loved ones on that tragic day, and shouldn’t go unchallenged. 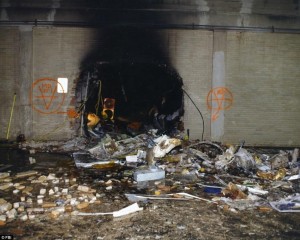 To the greatest failure of your “hit piece” (a published article aiming to sway public opinion by presenting false or biased information in a way that appears objective and truthful), though, is your failure to inform your readers that WhatDoesItMean.com does not publish “news”—we publish “stories”—and that we clearly inform our readers the truth about by stating on our front main page that we “create story-systems to understand and explain events – essentially a religious activity”.

By being common sense logic storytellers, too, and unlike you, we were able to warn our readers about the coming global economic collapse a full year ahead of it occurring when, on 28 June 2007, we published our report titled “US Banking Collapse ‘Imminent’ Warns French Banking Giant”—and, on 24 February 2014, in our report titled “Putin Orders Troops To Crimea Passes, Warns NATO Of War” wherein we warned Russia was prepared to use nuclear weapons to defend Crimea, and that over a year later President Putin confirmed was true—and, on 1 August 2014, when in our report titled “India Shocks World, Joins Russia Against Obama Regime” we warned that Hillary Clinton’s war against Libya was because it was preparing to have its oil paid for in gold instead of US dollars, and that Vice News confirmed as being true in 2016—to just name a few of the hundreds of predictive reports we’ve published over the past decade alone.

At the same time we were publishing reports such as these to warn our readers about what was to come, with, as you claim, “shoddy and fictitious sourcing” using “half-truths and bewildering leaps of logic”, you “real news” journalists told lie after lie in order to deceive the American people into illegally invading Iraq—and lied in claiming that interrogators had desecrated a Koran at Guantanamo Bay when they did no such thing—with your other proven lies being the Rathergate hoax, NBC and CNN lying about the George Zimmerman tape, NBC’s phony exploding GM truck, the Jason Blair scandal at the New York Times, and the Rolling Stone phony rape story—to just name a few of the hundreds of such lying examples you “real news” journalists are known the world over for creating in order to further your globalist agenda.

With your Democrat and Chronicle newspaper being owned by Gannett Company, Inc. (the largest US newspaper publisher as measured by total daily circulation), whose Chairman of the Board, John Jeffry Louis III,  is the one of the “Deep States” most effective operatives currently in open warfare against President Donald Trump and the American people (called deplorables) who voted for him—you ask your readers at the end of your “hit piece” against us: “Who are you going to believe, Rochester: Me or Sorcha Faal?”

Before they’re allowed to answer that question, though, and if you have the integrity to follow the Society of Professional Journalists Code of Ethics that demands that you “gather, update and correct information throughout the life of a news story”—then you will append your “hit piece” with this rebuttal so that these people can know the other side to this story you’re not allowing them to know.