Q is for Queen: Meet your Majesty

Meet the most powerful woman in the world. A Queen. A Goddess. Commander in chief, at your service within this physical realm. The Queen play no politics, and she wants We The People to be healthy and wealthy. Or perish. And if you harm anyone any which way deliberately, you will pay the consequences accordingly and swiftly. Nothing is hidden from the Queen, and she sees everyone, and everything.

The Queen has the entire Earth within the palms of her hands. The Queen is pure love, and kindness, but no one, no one can escape the power of her mighty sword, and army.

We are most certain that most of you are familiar with that name. Guess what is the name of our Queen?= Romana= AmonRa. And her last name is Didulo. Your Majesty Queen Romana Didulo, that is. Your Majesty is within the Kingdom of Canada. And in case you are Not aware of, Canada and the United States are SISTERS. >> So you know.

Above, Flag for The Kingdom of Canada 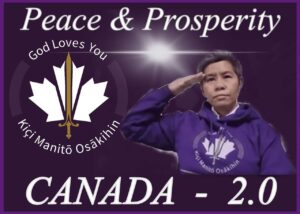 The Queen said that she has not gotten the time to wear her tiara, high heels shoes, and etc., etc., because she is very busy fixing all the Schitzs the Fake monarchies left all over the world.

The Queen also said that ALL world governments within their respective countries FAILED to protect, and work for their own people.

Further, She also said that if the words woman, queen, young, short hair, native, and the ways she dresses casually triggers you a reaction; you got work to do within. She asserts everyone that in the Kingdom of Canada, there it would be No minority, and No majority. We are all equal, and everyone should be wealthy and healthy, and govern by Natural Law. Further, she said that in the Kingdom of Canada, all political parties are NULL and VOID= Cancelled/ Destroyed. Political parties were corporations disguising as government of the people, worldwide. And voting for any favorite entity was a mock/mocking the people. It was a pretense; a scheme to divide and conquer, and create wars. Therefore, and continuing, it is unlawful in the Kingdom of Canada for anyone using division of any kind among the people.

The Queen is extremely allergic to politics.

Q is for Queen

Above, pictures of the Queen taking while making stops to meet people at different cities while she traveled throughout The Kingdom of Canada. She greeted children that anxiously were waiting for her with flowers.