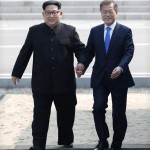 “I didn’t think I would be able to see such things happening in my life. I am happy to be witness to history in the making,” local resident Kwak Eun-jung told CNN.

It marked the beginning of a landmark summit, the first meeting of the leaders of North and South Korea in over a decade, with broad implications for the world.
Shaking hands with Moon Jae-in, while standing in the demilitarized zone (DMZ) dividing the two countries, Kim told the South Korean President he felt the weight of meeting at “such a historic location.”
“It was a very courageous decision for you to come all the way here,” Moon replied.

The highly-choreographed summit is the result of months of diplomatic talks between the North and the South and every moment has been laden with symbolism and history by organizers.

But in a rare unscripted moment right after their first meeting on the demarcation line, Kim invited Moon to step into the northern side of the DMZ. “Maybe this is the right time for you to enter North Korean territory,” Kim said to Moon, who took him up on the invitation.

South Korean viewers in Seoul erupted at the warm greeting between Kim and Moon, with residents gathered around television screens across the city applauding and cheering.

“I didn’t think I would be able to see such things happening in my life. I am happy to be witness to history in the making,” local resident Kwak Eun-jung told CNN.

‘Why was it so difficult to get here?’

Before the talks started, North Korea’s young leader said he wanted to write a new chapter in Korean relations.

“As I walked over here, I thought ‘why was it so difficult to get here?’ The separating line wasn’t even that high to cross. It was too easy to walk over that line and it took us 11 years to get here,” Kim told Moon and the gathered officials.

Moon praised Kim’s “courageous and bold decision” to sit down for talks during their morning meeting. “Over the past seven decades we weren’t able to communicate, so I think we can talk the whole day today”, Moon said, drawing laughs from Kim.

Kim received a full red-carpet welcome at the DMZ, including a military band in traditional dress which played the Korean folk song “arirang,” well known in both North and South Korea.

Signing a visitor’s book upon entering the Peace House, where negotiations took place, Kim wrote “a new history begins now” and “an age of peace, at the starting point of history.”

The summit is the result of lengthy and determined negotiating on the part of Moon, a longtime advocate of peace between the Koreas. It will also set the stage for the first meeting between a sitting US president and North Korean leader when Donald Trump and Kim meet in late May or June.

Ilsan, near the DMZ, South Korea (CNN): -By Ben Westcott and James Griffiths

“During this momentous period of historical transformation on the Korean Peninsula, reflecting the enduring aspiration of the Korean people for peace, prosperity and unification, President Moon Jae-in of the Republic of Korea and chairman Kim Jong Un of the State Affairs Commission of the Democratic People’s Republic of Korea held an Inter-Korean Summit Meeting at the ‘Peace House’ at Panmunjom on April 27, 2018.
The two leaders solemnly declared before the 80 million Korean people and the whole world that there will be no more war on the Korean Peninsula and thus a new era of peace has begun.
The two leaders, sharing the firm commitment to bring a swift end to the Cold War relic of longstanding division and confrontation, to boldly approach a new era of national reconciliation, peace and prosperity, and to improve and cultivate inter-Korean relations in a more active manner, declared at this historic site of Panmunjom as follows:
1. South and North Korea will reconnect the blood relations of the people and bring forward the future of co-prosperity and unification led by Koreans by facilitating comprehensive and groundbreaking advancement in inter-Korean relations. Improving and cultivating inter-Korean relations is the prevalent desire of the whole nation and the urgent calling of the times that cannot be held back any further.
2. South and North Korea will make joint efforts to alleviate the acute military tension and practically eliminate the danger of war on the Korean Peninsula.
3. South and North Korea will actively cooperate to establish a permanent and solid Peace regime on the Korean peninsula. Bringing an end to the current unactual state of armistice and establishing a robust peace regime on the Korean peninsula is a historical mission that must not be delayed any further.
The two leaders agreed, through regular meeting and direct telephone conversations, to hold frequent and candid discussion on issues vital to the nation, to strengthen mutual trust and to jointly endeavor to strengthen the positive momentum towards continuous advancement of inter-Korean relations as well as peace, prosperity and unification of the Korean Peninsula.
In this context, president Moon Jae-in agreed to visit Pyongyang this fall.
April 27, 2018
Done in Panmunjom
Moon Jae In
President
Kim Jong-un
Chairman
Republic of Korea State Affairs Commission
Democratic People’s Republic of Korea
Navigate