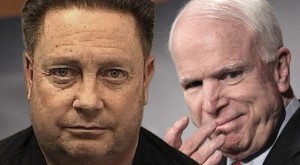 John McCain’s campaign manager has been arrested on pedophilia charges following, what law enforcement are referring to as, “a wide-ranging investigation” into Elite pedophile rings.

Jeffrey Claude Bartleson was the manager of Sen. John McCain’s presidential campaign office in Colorado and has just been arrested for charges including molesting young boys.

The head of the Police Department’s special victims unit, Sgt. Brett Wilson, said today that there are “several active investigations” involving Bartleson and that his arrest was part of a much larger operation involving child trafficking networks in the United States.

He said that a full-time team had been assigned to this case and that numerous boys are due to be interviewed.

Wilson said he couldn’t detail the allegations due to the active nature of the case as part of a wide-reaching investigation.

However, in affidavits filed by police investigators in Pueblo District Court, authorities say that the most recent complaints follow a pattern involving Bartleson that dates to 1982.

Denver Post reports: According to Detective Daniel Anderson, Bartleson has usually positioned himself so he is around children, whether as a Scoutmaster, as a sponsor of the chemical dependency unit at Pueblo’s Parkview Medical Center, at his church or simply by inviting children to spend the night at his home.

In June 2003, then-Rep. Scott McInnis praised Bartleson in a tribute at the U.S. House of Representatives.

In the tribute, McInnis noted that “in his capacity as a foster parent, Jeff has helped several youths in the region through his work with the Young Life Association and the El Pueblo Boys and Girls Ranch.”

McInnis also noted that Bartleson was instrumental in the foundation and development of the Interfaith Hospitality network, which McInnis described as “one of Pueblo’s newest self-help organizations.”

Dill said he believed that Bartleson directed McCain efforts in southern Colorado. State GOP officials said today they had no contact with Bartleson.

The latest arrest stemmed from a report by a woman who worked with Bartleson in the McCain campaign office.

According to the woman, she and a co-worker were planning in October to attend a Sarah Palin rally in Colorado Springs but wanted to travel to the Springs the night before.

She told police that she mentioned the planned trip to Bartleson. He offered to keep her 5-year-old son overnight in Pueblo and then drive up to Colorado Springs the next day and meet them there.

The woman said that her son told her that while at Bartleson’s home, Bartleson insisted on giving him a bath, during which he was sexually molested. Later, said the child, Bartleson forced him into Bartleson’s bed, where he once again was molested.

In interviews this week with investigators, the child said that when he tried to get away from Bartleson, he kept pulling him back into the bed. He was finally able to leave when Bartleson fell asleep.

The child described Bartleson as “a bad man,” according to the police affidavit. Asked why, the child responded, “because he does things to kids.”

Detective Anderson said he asked the child how he knew Bartleson did this to kids, and the boy responded that “Mr. Jeff” did this to five people and he knew that because “Mr. Jeff” told him so.

Another alleged victim, according to a police affidavit, said he met Bartleson through the Interfaith Hospitality Network and was molested by him when he stayed at Bartleson’s home. Unknown to him until much later, he also was videotaped by Bartleson while he showered at Bartleson’s house, the youth told police.

The young man told police that Bartleson “said if I told anybody, he’d hurt me.”

Dustin Taylor, the Pueblo detective who interviewed the second youth, said that his story about Bartleson touching his genital area “matches the modus operandi described by other victims coming out against Bartleson.”

Capt. Dave Lucero of the Pueblo County Sheriff’s Office said that Bartleson is being held on a $150,000 bond for investigation of sex assault on a child.