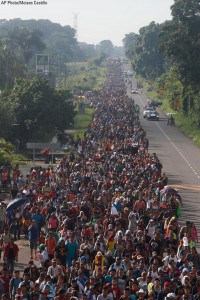 Apparently, the Caravan of invasion from South America is beyond comprehension. Here we have the media in South America that is an extension from the same media here in the United States [ radio, news paper, television, etc.] that is as we all know corrupt propaganda, brainwashing the good people from Central America+ South America to join others for a better life in the United States. The poor people that do not know any better of the scam, get their bags+ their children ready and join the many.

However, what they do not know is that the many are very dangerous people, that by the way are mingled with students mostly from Venezuela that as well are being brainwashed. The many, as we were saying are from all over the world, or should we say, they are fighters like for example from ISIS+ MS13, etc., that wants their way in, in the United States! And God only knows what their intentions are once they are in the country. We guess they have their masters waiting for them here, and or other sleeping cells that are already here, supposedly to “take over America.”

These criminals for a fact have covertly invaded many countries in South+ Central America, inclusive some serious Iranian terrorists fuckwits in Venezuela. Actually the entire government of Venezuela is run by Iranian criminals+ many from Communists Cuba+ China. We can imagine why the country is in the situation that it is now.

For certainly we do not want the enemies in our backyard.

This is dangerous. This is pathetic. This is heart breaking.

And they warned us about October surprise. Bingo!

Read more about these subjects below:

Judicial Watch has obtained exclusive information and photos from Guatemalan authorities revealing that they have recovered seven unaccompanied minors from human smugglers working inside the caravan. The children have been taken into custody and they are being provided with food, water and medical attention, according to a high-level Guatemalan government official. The smugglers have been arrested and the broader investigation into criminal activity in the caravan is ongoing.

A Judicial Watch team, headed by Director of Investigations Chris Farrell, spent several days on the Guatemala-Honduras border covering the illegal alien caravan, which originated in the northern Honduran city of San Pedro Sula. The team filed a number of exclusive reports and videos and met with Guatemalan President Jimmy Morales and other top government officials.

“Judicial Watch has been at the forefront of this top news story, reporting exclusive information from inside that no other news organization is reporting,” said Judicial Watch President Tom Fitton. “Chris Farrell and Irene Garcia put themselves in harm’s way to get this material, and Judicial Watch supporters nationwide are highly grateful for their sacrifices.”

Read more about human trafficking in the caravan here. See Judicial Watch’s exclusive interview with a caravan member, a 40-year-old Honduran who previously lived in the United States for decades before getting deported, here.

See Judicial Watch’s exclusive reporting about the large numbers of migrants from various countries–including Brazil and even as far as China & India– traveling through Central America en route to the United States here. Read more about this exclusive story here.

Judicial Watch recently reported that, in a startling revelation, Guatemala’s president announced in the country’s largest newspaper that nearly 100 ISIS terrorists have been apprehended in the impoverished Central American nation.

Besides gang members and mobs of young angry men, the Central American caravan making its way into the United States also consists of Africans, Bangladeshis, Sri Lankans and Indians. Judicial Watch is covering the crisis from the Guatemalan-Honduran border this week and observed that the popular mainstream media narrative of desperate migrants—many of them women and children—seeking a better life is hardly accurate. Guatemalan intelligence officials confirmed that the caravan that originated in the northern Honduran city of San Pedro Sula includes a multitude of Special Interest Aliens (SIA) from the countries listed above as well as other criminal elements and gang members.

There are also large groups of men, some with criminal histories, aggressively demanding that the U.S. take them in. During a visit to the Guatemalan town of Chiquimula, about 35 miles from the Honduran border, Judicial Watch encountered a rowdy group of about 600 men, ages 17 to about 40, marching north on a narrow two-lane highway. Among them was a 40-year-old Honduran man who previously lived in the United States for decades and got deported. His English was quite good, and he said his kids and girlfriend live in the U.S. Another man in his 30s contradicted media reports that caravan participants are fleeing violence and fear for their life. “We’re not scared,” he said waving his index finger as others around him nodded in agreement. “We’re going to the United States to get jobs.” Others chanted “vamos para allá Trump!” (We’re coming Trump) as they clenched their fists in the air. “We need money and food,” said a 29-year-old man who made the trek with his 21-year-old brother.

All of the migrants interviewed by Judicial Watch repeated the same rehearsed line when asked who organized the caravan, insisting it was a spontaneous event even though there were clearly organizers shouting instructions in Spanish and putting select persons in front of cameras for interviews. A few claimed they heard about it on local news in Honduras. All of them said the caravan was not about politics but rather poverty. “I just want to get back to the U.S.,” said a 32-year-old man who admitted he has been deported from the U.S. twice. “We are all just looking for work.” The group radiated a sense of empowerment. One marcher, who appeared to be in his late teens, yelled “you go live in Honduras and see what it’s like!”

Honduran President Juan Orlando Hernández, a conservative, said in a local newspaper report that leftist interests seeking to destabilize the country are manipulating migrants.  Women and children are being used without regard to the risks to their lives, Hernández said. “The irregular mobilization was organized for political reasons to negatively affect the governance and image of Honduras and to destabilize the peace of neighboring countries,” the president said, adding that many have returned to the country after realizing they’ve been fooled.

Guatemala is overwhelmed with the sudden onslaught and immigration officials confirmed 1,700 migrants have been returned to Honduras on buses. The first wave of migrants totaled about 4,000, according to Guatemalan government sources, followed by a second, less organized group of about 2,000. The impoverished Central American nation needs help, including logistical, communications and civil affairs support to stop the human caravans. “There are only so many resources we can dedicate to this,” said Guatemalan Secretary of Strategic Intelligence Mario Duarte. Guatemalans are getting robbed and crimes are being committed by the people in the caravans, Duarte said.