INDIVIDUALS JOIN TOGETHER TO ‘WALK AWAY’ FROM DEMOCRATIC PARTY: COVERAGE 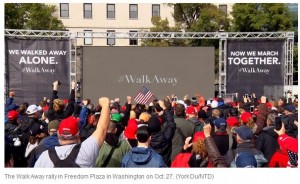 Discard what does not serve anyone. ~and quote.

WASHINGTON—The mainstream media ignored it completely. President Donald Trump wrote about it on Twitter. And on a rainy weekend, the members of the Walk Away movement made a statement about recovering themselves and loving America.

The five-month-old Walk Away campaign—the joining of individuals who used Facebook to express their desire to leave the Democratic Party—became so much more than a hashtag, with a three-day festival marked by high spirits, fiery speeches, and a pretty good turnout, despite the cold rain.

On Twitter, progressive pedants posted photos from unflattering angles, seeking to prove that the crowd was smaller than the 5,500 claimed by organizers. Nevertheless, it was a triumph for the new, hybrid grassroots movement that, in some ways, has picked up where the Tea Party left off.

The motley movement that has confounded and enraged the left proved itself, first of all, to be human (not bots—digital creations used to manipulate social media—as some on the left had claimed), and humorous and determined, to boot.

On Oct. 27, with a short, 15-minute march in the rain from John Marshall Park to Freedom Plaza, Walk Away strode into the American populist, free-speech renaissance that’s exploding nationwide in the era of Trump. People descended from all across the country to attend the various events. One couple even came all the way from New Zealand.

The very same weekend, by sheer coincidence, hundreds of young black leaders were invited to The White House to meet with President Donald Trump, as Turning Point USA’s Candace Owens announced “Blexit,” referring to the divorce between American blacks and the Democratic Party. All across the city, patriotism was in the air, with chants of “USA” and “Walk Away.”

The Walk Away march weekend began with a glitzy, packed gala at Trump International Hotel on Oct. 26.

Brandon Straka, the founder of the Walk Away movement, on the red carpet at the Trump International Hotel in Washington on Oct. 26. (York Du/NTD)
Bikers for Trump mixed with glamorous pop stars and elegant ladies in ball gowns, as Walk Away founder Brandon Straka, dressed in a three-piece black suit and top hat, posed on a red carpet, besieged by hordes of people lining up to have their pictures taken with him.

Inside the packed gala, Straka was met with many standing ovations, as he took the stage with a theatrical flair, in top hat and walking stick, to thank his team of volunteers and describe the wild ride he’s been on since he got off the liberal train.

Five months ago, he was a hairdresser and aspiring actor; now, he’s an unlikely political rock star, who was even thanked personally in a tweet from the president, who wrote, “Congratulations to Brandon Straka for starting something very special.”

In May, Straka lit a match to a new bonfire of post-Trumpian frustration with a video that went viral explaining why he—a lifelong Democrat—was “walking away” from the left.

Straka quickly became a popular guest on virtually every right-of-center cable TV show and podcast,  launched his own podcast, and raised money for a quickly planned, very polished christening of the grassroots movement he launched after going on a run, and having the words come to him: “Once upon a time, I was a liberal.”

What has distinguished the Walk Away movement from other conservative, MAGA, and anti-left movements, is precisely that it was by and for those who actually were liberals and who didn’t (by and large) vote for Trump, but who became “walk-away-ers” and even Trump supporters, due to the abuses they had suffered at the hands of the left.

Edith Cornelius at the Trump International Hotel in Washington on Oct. 26. (York Du/NTD)
With the sudden emergence of Walk Away, identity politics is reaping the revenge it sowed with its countless assaults on freedom of opinion, expression, and thought.

In that sense, the movement is internal and subtle—it is about coming out of the identity politics closet, shaking off its choke-collars, and daring to be proud to be an American before anything else.

“We found civility again,” said Straka. “I watched with a measurable pride as Americans, who had sat by silently for so long, began to find their truth and to push back against hate, with love.”

People at the march told The Epoch Times that they had “lost” friends and even family members, been disinvited from holiday parties and even weddings, in some cases written out of family inheritances, because of even a fractional show of doubt toward the media’s anti-Trump narrative.

A woman named Edie had tears in her eyes, as she recounted losing her lifelong best friend after coming out as a Walk-Awayer. “I feel like these people here are my new family,” she said. “It is such a relief not to be alone with the way I feel, the way I see things.”

“I texted my son on the plane before taking off to come here,” said Olga, who came to the United States from the Soviet Union. “I was afraid I might lose him but he wrote back, ‘Mom, have a great time.’ I was so relieved!”

“This is amazing,” said D’Souza, who spoke at the closing brunch on Oct. 28. “This is deplorable! Are you guys ready for the midterms?”

The Walk Away rally in Freedom Plaza in Washington on Oct. 27. (York Du/NTD)

D’Souza made a very interesting point in his opening remarks: “I’m thrilled to be here with my wife, Debbie. We’re both immigrants to the United States. The immigrant is, in a sense, the original Walk Away.”

American immigrants kick-started the country at the turn of the last century. All fled various forms of tyranny, repression, poverty, and war. Coming to America was leaving something that felt intolerable.

And this is what the Walk Away movement is a microcosm of: the never-ending, infinite human yearning for freedom, be it from literal chains or psychic and social chains.

Prager U’s Witt stressed that the greatest current threat to liberty in this country is coming from Big Tech. “It’s disgusting what these big tech companies are doing to conservatives. We want freedom of speech!” he said.

He noted that one of his videos, which opposed murder, was deleted from social media for being too controversial. He also spoke about the war on men.

“Men are committing suicide at incredibly high rates,” he said. “They die at work, they’re depressed, they’re anxious, and they’re lonely. Men are discriminated against everywhere they go. And by the way, two genders—that’s how many we’ve got.”

“I am so excited to be here today,” said Burns, who is black, “to make a declaration to the world that we are tired of those race-baiting Democrats.”

Media Silent
Straka, speaking at the rally on Oct. 27, made an important point:

“I still have yet to receive a single phone call from CNN, MSNBC, Huffington Post, New York Times, or any of the usual suspects, for an interview or even a statement,” he said. “That has not stopped any of them from printing stories about this movement, the Walk Away Campaign. They have called us Russian propaganda, Russian bots, paid actors, fake testimonials from fake people. Well, I say: fake news!”

The crowd cheered, suggesting that compelling the media to report on worlds and views they disagree with could be itself the platform for a grassroots movement.

Members of the Walk Away movement march through Washington on Oct. 27. (York Du/NTD)

In a Vietnamese restaurant the day after the march, there was a big-screen TV tuned to CNN.

The station offered no mention of the events involving either WalkAway or the Blexit movement—both events that the president has addressed directly.

The CNN caption about how we’re supposed to think of this past week in U.S. history had nothing of the complexity, joy, or grassroots passion for free speech on display with Walk Away. Instead, only this: “Deadly shootings and attempted bombings mark deadly week.”

The slogan for the Walk Away march was simple and resonant: “We walked away alone, but now we march together.”

Take time to watch these inspiring videos!Get the energy going!