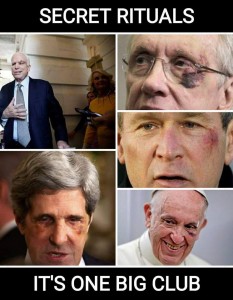 On the Reformation’s anniversary, Covenanters post “spiritual eviction orders” and legal notices on Papist churches around the world

The International Tribunal of Crimes of Church and State (ITCCS)

Breaking News from the ITCCS and The Covenanters movement

Proclamation summons all “lost brethren” to leave the false Church of Rome – Action builds on Easter, 2014 “Emancipation and Nullification Order” that disestablished the papacy

This morning, at “Roman Catholic” cathedrals across America, Canada, England, Scotland and Ireland, members of the Covenanters movement posted public Proclamations that evicted the Church of Rome from their land and called upon all “lost brethren” to leave that false church. The Proclamation places all adherents and clergy of the Church of Rome on legal notice that they are subject to citizens’ arrest for any future association with their murderous, criminally convicted corporation.

Today’s action was marred by some incidents, including physical confrontations between catholic priests and the groups of Covenanters who stood peacefully outside the Roman churches. One Covenanter member, an elderly aboriginal man of the Anishnabe nation, was assaulted by an outraged priest at an eastern Canadian church. The assaulted man refused to press charges against the priest, asking instead for the latter to “search his conscience and stop serving the Thing that murdered so many of my people.” Police appeared at several of the actions but no arrests were made.

Today’s action builds on the Maastricht Proclamation issued on Easter, 2014 by the International Common Law Court of Justice as part of its case against top Vatican officials, including Jorge Bergoglio, aka “pope Francis”. The Proclamation nullified the authority of the Church of Rome and the papacy under the laws of God and mankind, and called upon top Vatican officials to resign. One such official, the so-called “Black Pope”, Jesuit leader Adolfo Pachon, did in fact announce his resignation from his office less than a month after the issuing of the Maastricht Proclamation. (See https://www.youtube.com/watch?v=1zvtuHT7Cl4 , and http://www.seawapa.co/2014/05/breaking-news-jesuit-black-pope-resigns.html and http://itccs.org/2014/05/25/itccs-breaking-news-may-25-2014-gmt-brussels-accused-child-killer-resigns-from-top-vatican-office-jesuit-head-adolfo-pachon-makes-startling-announcement-as-he-stands-trial-in-absentia-for-cri/ )

In the words of Scottish Covenanter John Burke,

“Just as Martin Luther’s posting of his 95 Theses opened a floodgate of liberation, so too is our action today just the start of a bigger disestablishing of the oldest tyranny in our history. We will no longer allow child killing priests and Vatican crimes to terrorize our nations. Their time is over, so help us God.”

For more information and to participate in this movement, contact the Covenanters at congregationalcovenant@gmail.com .

Tune in this Sunday November 5 at 3 pm pacific, 6 pm eastern for more information, at Here We Stand, www.bbsradio.com/herewestand .

Issued 31 October, 2017 by the ITCCS and The Covenant of Free Congregational Christians (The Covenanters)