Hydrogen Cars Released in the U.S.! 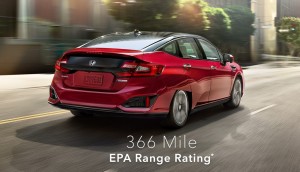 Honda’s hydrogen car was released in the U.S. in 2010. So why Haven’t We Heard About It? Because so far, it is available only in California.

The Honda Clarity operates on hydrogen extracted from water. And you refuel at a hydrogen fueling station which operates much like a gas station. Hydrogen is extracted from water at the station and stored in a holding tank. Of course, there are versions of this vehicle that require only that you have a bottle of water on hand, but that seems to be a bit much for Americans to grasp at this moment in time. So for transitional purposes, U.S. users can still fill up at a station near them. Click here to learn how hydrogen fueling stations work. 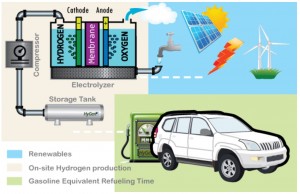 When the hydrogen fuel cell was first introduced, it was advertised as a car that runs on water. Here is an excerpt from a 2012 presscore.ca article written by Paul W. Kincaid:
“All you need is a liter of water – any kind of water to be exact, whether its river, rain, sea water, or even Japanese tea.  Genepax unveiled a car that runs on water in the western Japanese city of Osaka.

“ ‘The main characteristic of this car is that no external input is needed. The car will continue to run as long as you have a bottle of water inside for you to add from time to time.’

“According to Japanese broadcaster TV Tokyo, once the water is poured into a water tank at the back of the car, the newly invented energy generator takes out the hydrogen from the water, releases electrons and finally generates electrical power.
In the very near future all you will need to power your vehicle is a liter of water – any kind of water to be exact, whether its river, rain, sea water, or even Japanese tea.”

Read a review of the Honda Clarity in the L.A. Times by clicking here.