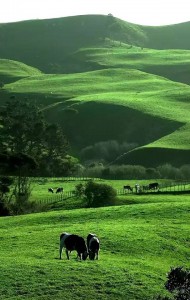 In a brief essay that appeared ca. 1925, poet Katharine Lee Bates described her inspiration for writing “America the Beautiful,” the poem that would evolve into one of the nation’s best-loved patriotic songs, during a trip to Pike’s Peak in 1893.

Bates was a professor at Wellesley and had traveled west to teach a summer course in Colorado Springs. Bates and the other professors decided to “celebrate the close of the session by a merry expedition to the top of Pike’s Peak.” They made the ascent by prairie wagon. At the top, Bates later wrote, she was inspired by “the sea-like expanse of fertile country . . . under those ample skies,” and “the opening lines of the hymn floated into my mind.” Those opening lines— “O beautiful for spacious skies, / For amber waves of grain, / For purple mountain majesties / Above the fruited plain!”—would eventually become the lyrics of one of the best-known songs in American history.

Bates finished writing “America the Beautiful” before leaving Colorado Springs but didn’t think of publishing it until two years later. The poem was first printed in a weekly newspaper, The Congregationalist, on July 4, 1895. Bates’s patriotic words were soon set to music, most popularly to composer S. A. Ward’s “Materna,” the tune to which we sing it today. Celebrating “country loved” and the “patriot dream,” the song resonated with Americans from all walks of life and became enormously popular. Within twenty years, Bates (after revising some of the lyrics in 1904) had “given hundreds, perhaps thousands, of free permissions” for “America the Beautiful” to appear “in church hymnals and Sunday School song books of nearly all the denominations; . . . in a large number of regularly published song books, poetry readers, civic readers, patriotic readers . . . in manuals of hymns and prayers, and anthologies of patriotic prose and poetry . . . and in countless periodicals.”

While Bates was initially surprised by the poem’s success, she later reflected that its enduring “hold as it has upon our people, is clearly due to the fact that Americans are at heart idealists, with a fundamental faith in human brotherhood.”
This is the version of the poem that Katharine Bates copyrighted and authorized people to use:

O beautiful for spacious skies,  For amber waves of grain,  For purple mountain majesties    Above the fruited plain!  America! America!  God shed His grace on thee  And crown thy good with brotherhood  From sea to shining sea!

O beautiful for heroes proved    In liberating strife,  Who more than self their country loved,  And mercy more than life!  America!  America!    May God thy gold refine  Till all success be nobleness,    And every gain divine!