EX CIA AGENT BLOW THE WHISTLE ON THE ELITES: PEDOGATE 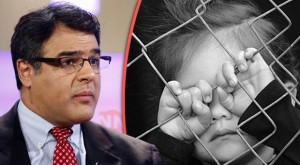 If this do not make you fucking mad: disgusting: heart broken, we do not know what will. The Killing of our children is the epitome for all the people of our planet, and consciously bring down this evil that is destroying our humanity.

We are being destroy and we do not see it!

Our DNA is being destroy with what we eat, breath, and think; and deliberately murdering our youth, and those that survive are being taught sexual immorality, = degeneration as homosexuality, transgender, sex organs mutilation, and disrespect for nature.  These are all against the Creator creations!

HOW much blind have we been?

The time is now to move and stop these atrocities before it is too late. Our time is now to speak up, share everywhere these issues without prejudice. Fucking get involve in your family, community, school, Church! These are issues that concern everyone.

WAKE THE FUCK UP! Together we can destroy these talmudic jewish cons demons in human form.

Take a look at this diagram so all have an idea where the demons are hiding. Those so call government are the perpetrators. The time has come for us all governing ourselves, and put in the garbage what no longer serves the good.

A decorated 14-year veteran CIA agent has blown the whistle and made a public statement to expose the Central Intelligence Agency for operating a child trafficking ring that procures children for global elite pedophiles.

Former spy John Kiriakou, who also has deep ties to Hollywood from working as an advisor to the movie business, has revealed how the agency provides child sex slaves to powerful oligarchs in the entertainment industry, Washington D.C. and beyond.

Kiriakou says that they have “sources” installed in the upper echelons of society, politics and the movie business.

In return for information, the CIA provides these elite sources with a steady stream of “child prostitutes” who are usually raped and killed, and most likely never seen again.

Knowingly putting his life on the line to go public with this information, Kiriakou made a public appearance to lift the lid on this horrific culture of child abuse.

During his exposé, he describes how he would meet an elite source in a hotel who would demand children in return for information.

He reveals how he would secretly think of these so-called oligarchs as “scumbags” but that he “had to give them what they wanted.”

To emphasize the scenario, Kiriakou explains how shocking the situation would appear to most people if the source was demanding adult prostitutes, at which point he asks the audience, “how many people would get him a prostitute?”

When hardly anybody raises their hands, he says:

“The answer is: Sure.

“You know he’s a scumbag, of course, but your job is to deal with scumbags and you would be expected to go out and get him a prostitute.

“But what if he asks you for a child prostitute?

“Your job as a CIA agent is to break the laws of the country you are serving.

“That’s your job: Your job is to commit espionage.

“Most CIA officers would procure the child.”

John Kiriakou served a fourteen-year career as a C.I.A. officer that included thrilling, yet dangerous, tours as a specialist in counterterrorism.

He successfully recruited several foreign agents to spy for the US In Athens, in 1999 and 2000, and at one point was the target of an assassination attempt by leftists.

In 2002, he chased Al Qaeda members in Pakistan, and when Al Qaeda logistics leader Abu Zubaydah, was wounded and captured, Kiriakou guarded his bedside.

Kiriakou wrote a colorful memoir, where he recounted many of his exploits, called “The Reluctant Spy: My Secret Life in the C.I.A.’s War on Terror.”

After retiring from the agency in 2004 he took a job with the accounting and consulting firm Deloitte.

Recently he has been working in the corporate intelligence field and as an advisor to Hollywood filmmakers on the side.