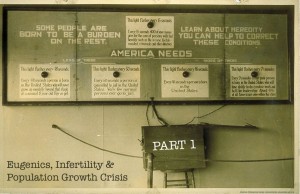 Over 60,000 Americans were sterilized in the U.S., in the name of eugenics, but it didn’t end there. The phenomenon of men’s sperm declining by 50% and infertility in females rapidly rising – stumps no one – they just won’t tell you the truth.

• Over 60,000 Americans were sterilized in the name of eugenics and the Supreme Court law wasn’t repealed until the 1970s.

• The U.S. population growth hit a historic 80-year low in 2018 due to less births, while immigration continues to grow – projected to be the primary contributor after 2030.

• Nearly every western country has a historic low birth rate – media is silent.

• The Rockefellers worked with scientists, WHO, UNFPA, USAID, multiple governments, and others, to create anti-fertility vaccines that would sterilize both men and women on a mass scale, with research evolving into crops as well.

• DNA databases you voluntarily submit your DNA to are being used for scientific research, by law enforcement, and based on history – for eugenics.

• Over 60% of processed food Americans consume is genetically modified. Coincidentally, children have seen a 50% increase in food allergies since 2011, and obesity and health issues are rapidly rising.

The U.S. has hit a historic 80-year low population growth, with the lowest birthrate since just after the Great Depression. This same pattern is happening in most of the western world. While these numbers continue to plummet, immigrants are being flown in, driven in, and boated in so as to meet their 2030 projected agenda for immigrants to create new growth in populations. As the infertility crisis in both men and women rapidly rises, the elders will outnumber the children. We have already reached the tipping point, and are on the brink of their end game.

Eugenicists under the guise of “scientists” and “philanthropists” have been running this game for decades. Statistics don’t lie. The timeline paints the picture, the data creates the framework, and the circle of people instrumental in these agendas are quoted in their own words. It’s not a secret – they haven’t hidden this – one only needs to open their eyes. After all, they’ve long since formed their “population control” organizations, and have been telling you their concerns for years now. You just couldn’t imagine that what they meant by “control” was literally altering human physiology and outcomes to serve their eugenics agenda.

What is the true history of eugenics, its role across the globe, and where are our futures headed? The dictionary definition of eugenics, is the science of improving a human population by controlled breeding to increase the occurrence of desirable heritable characteristics. Another popular definition is, eugenics is a set of beliefs and practices that aim to improve the genetic quality of a human population by excluding certain genetic groups judged to be inferior, and promoting other genetic groups judged to be superior. Eugenics dates back to the 1800s, and make no mistake – though the terminology may have changed, it’s more than prevalent today. From pushed agendas, forced agendas, sterilizations, vaccines, GMOs, abortions, environmental, and otherwise – it’s happening. The evidence is well documented below. 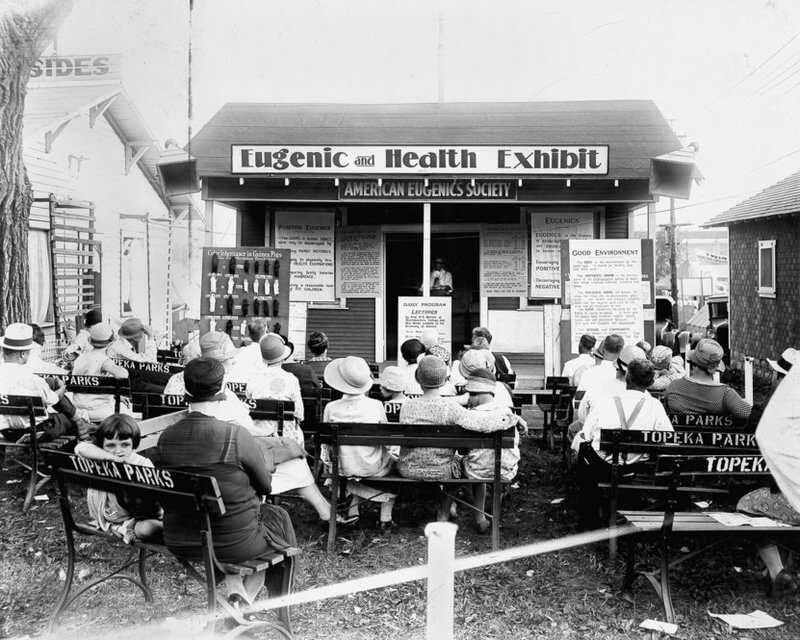 Biotechnology, genomics, and genetics research laboratories have long held their positions in the scientific industry, while being funded by all the usual suspects.

Jackson Laboratory in Maine for example, home to many renown scientists, has been around since 1929, boasts the addition of the Rockefeller wing added in 1938, and is host to 63 research labs between Maine and Connecticut locations, that study the unique genetic makeup of each individual.

The ability to sequence and analyze entire mammalian genomes has created a revolution in biomedical research. Discovery has gone far beyond the single-gene sequence and protein function research previously possible. We are now investigating entire gene networks, background effects, the role of single nucleotide polymorphisms and structural variants across the genome, modeling genotype-phenotype relationships and much more.

Certainly, the CRISPR-Cas9 method for genome editing, helps things along.

The History of Eugenics Timeline

1796 The Smallpox vaccine was introduced by Edward Jenner. He became known as the father of immunology, and continued his work into the mid 1800s.

Late 1800sFrancis Galton coined the term eugenics. Galton was half-cousin of Charles Darwin. Galton was involved in the fields of genetics, psychology, meteorology, and statistics, and advocated for a selective breeding program for humans.

Early 1900sCharles Davenport and Harry Laughlin began a eugenics movement in the U.S.

1901 John D. Rockefeller founded the Rockefeller Institute for Medical Research (RIMR) in Arkansas, where William Welch served as chairman of the advisory board. Welch later became a trustee and chairman of the executive committee to the Carnegie Institution. Welch was a physician, pathologist, bacteriologist, and medical school administrator, in addition to being one of the four founding professors at the Johns Hopkins Hospital. By the 1930s, the Rockefeller Institute became the center for viral research where most in the field of virology trained.

1907 Indiana was the first state to enact a sterilization law, and by 1935, 32 other states followed suit, which resulted in forced sterilization of 60,000 people in the U.S. by the mid 60s. Not only did they focus these sterilization programs on the disabled, but on the poor, criminals, and “low IQ” as well. California accounted for one third of the sterilizations across the country. 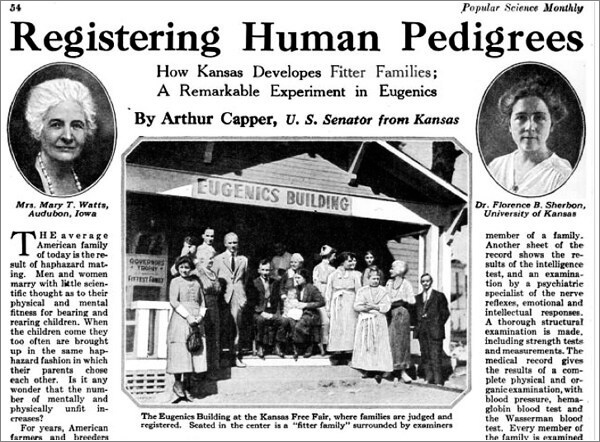 1910Charles Davenport founded the Eugenics Record Office (ERO)at Cold Spring Harbor Laboratory on Long Island “to improve the natural, physical, mental, and temperamental qualities of the human family.” Harry Laughlin was the first director, and they began collecting data on family pedigrees depicting the inheritance of mental, moral, and physical traits, with a focus on undesirable traits. The ERO operated for three decades.

The English focused on selective breeding for positive traits, while the U.S. focused on eliminating negative traits by preventing poor, uneducated, and minority populations from propagating.

1913 The Rockefeller Foundation was founded by John D. Rockefeller, John D. Rockefeller Jr., and Frederick Taylor Gates in New York. They have put millions into molecular biology and the health industry throughout the years. In 1984 the Rockefeller Foundation met with international delegates from the fields of medicine, government and philanthropy to discuss creating a global immunization program for children. With millions in financial support, they managed to increase immunization rates to 80%.

1914Harry Laughlin published a Model Eugenical Sterilization Lawthat would authorize sterilization of the “socially inadequate.” It was to include people supported in institutions or maintained wholly or in part by public expense, in addition to feebleminded, insane, criminalistics, epileptic, inebriate, diseased, blind, deaf, deformed, dependent, orphans, ne’er-do-wells, tramps, the homeless and paupers. By the time it was published 12 states had already enacted sterilization laws.

A couple of quotes from Margaret Sanger’s article on Birth Control and Racial Betterment:

While I personally believe in the sterilization of the feeble-minded, the insane and syphilitic, I have not been able to discover that these measures are more than superficial deterrents when applied to the constantly growing stream of the unfit. They are excellent means of meeting a certain phase of the situation, but I believe in regard to these, as in regard to other eugenic means, that they do not go to the bottom of the matter.

Eugenics without Birth Control seems to us a house builded upon the sands. It is at the mercy of the rising stream of the unfit. It cannot stand against the furious winds of economic pressure which have buffeted into partial or total helplessness a tremendous proportion of the human race. Only upon a free, self-determining motherhood can rest any unshakable structure of racial betterment.

1922 The American Eugenics Society was founded by Irving Fisher, Madison Grant, Harry H. Laughlin, Henry Fairfield Osborn, and Henry Crampton. It later became the Society for the Study of Social Biology in 1973 after Roe V. Wade was released, and eventually the Society for Biodemography and Social Biology. It was formed after the second international conference on Eugenics in New York in 1921, with its focus on population control, genetics, eugenic health, and medical genetics. Osborn was quoted stating, “Birth control and abortion are turning out to be great eugenic advances of our time.”

1926 Margaret Sanger stated in her autobiography that she had addressed the women’s branch of the Ku Klux Klan, who were a group against blacks, Catholics, and Jews. Planned Parenthood has recently denounced Sanger’s address to the Ku Klux Klan, after it was put in the spotlight.

1927 The Kaiser Wilhelm Institute of Anthropology, Human Heredity, and Eugenics was founded in Berlin, Germany. During the Nazi era, it was strongly associated with theories of Nazi eugenics and racial hygiene. Between 1937-1938 they analyzed 600 children descending from French-African soldiers in Nazi Germany, and later sterilized them.

1927 Supreme court Buck V. Bell, the state of Virginia sought to sterilize Carrie Buck for giving birth to a baby out of wedlock. Supreme Court Justice Wendell Holmes ruled against Buck, declaring “It is better for all the world, if instead of waiting to execute degenerate offspring for crime, or to let them starve for imbecility, society can prevent those who are manifestly unfit from continuing their kind…Three generations of imbeciles is enough.” And so it was – legitimized by the Supreme Court. It wasn’t until the 1970s that state legislatures began repealing these laws.

Margaret Sanger endorsed this decision. Adolph Hitler himself was impressed, and the Nazi’s sought advice from California in perfecting their own efforts, because California’s program was so bolden. 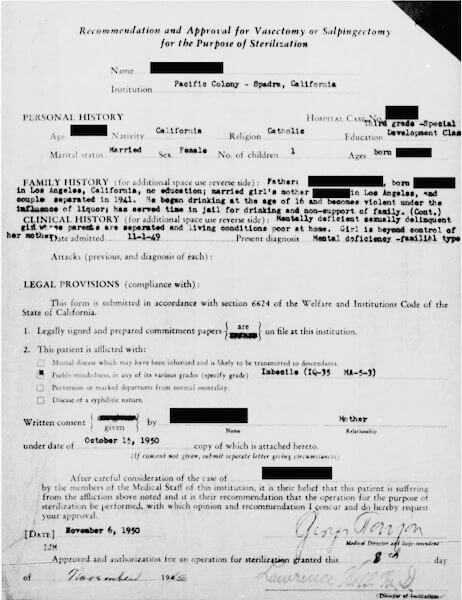 1930The Rockefeller Foundation began financing the Kaiser Wilhelm Institute of Anthropology, Human Heredity, and Eugenics, and continued to fund them up through 1939, being fully aware of their eugenics experiments.

1933 Borrowing from Harry Laughlin’s Model Law, the German Nazi governmentadopted a law that provided legal basis for sterilizing more than 350,000 people. Laughlin published a translation of the German Law for the Prevention of Defective Progeny in The Eugenical News, and was awarded an honorary degree from the University of Heidelberg in 1936, in tribute for his work in “the science of racial cleansing.”

1939 Controversial statement by Margaret Sanger: She reiterated the need for black ministers to head up the “negro project” in a letter to Clarence Gamble in Dec. 1939, stating “We do not want word to go out that we want to exterminate the Negro population and the minister is the man who can straighten out that idea if it ever occurs to any of their more rebellious members.”

Planned Parenthood created a fact sheet debunking it was a racist statement, but when reviewing some of Sanger’s articles, it paints a different story. Planned Parenthood also states that the comments circulating about Sanger calling black people, poor peoples, Slavs, Latins, and Hebrews “human weeds,” originated from an anonymous flyer.

Despite Planned Parenthood’s denial of being racist or having a population agenda – otherwise known as eugenics in this case – poor and minority areas have always been a target of theirs, as well as eugenicists. Live Action recently contacted Planned Parenthood to ask “if they would accept donations to specifically abort black babies.” The response was alarming.