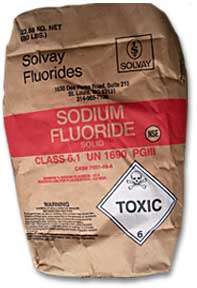 On Wednesday, ardent anti-fluoridation advocates were surprised, when months of regular visits to City Council meetings had another result than usual, reported NBC5 Dallas Fort Worth. After five decades, Dallas will be stopping the practice that has been implemented to counter tooth decay, a practice that since has shown to be inefficient and to cause more harm than good.

Economic factors, rather than public health concerns may, or may not have played the primary role. Fluoridation opponents reportedly claimed that the city could save about $1 million a year that is spent on the industrial chemical.

“We don’t need it and we’d just save a million dollars that we can use for something else. … We’re looking into seeing what we can do immediately so we can get those funds up front now.”

“Yeah. … This is major big. I knew we would prevail. It only makes sense. We’re spending too much money on an ineffective program”.

She added, that she is more concerned about the possible health impact of drinking fluoridated water and that toothpaste with fluoride is a better way to fight tooth decay. Comments by city officials, for their part, dealt with potential savings rather than health issues.

Numerous studies have documented that fluoride reduces tooth decay if it is used topically, that is for example in fluoridated tooth paste. Studies have also shown that one does not achieve adequate results by metabolizing fluoride in the digestive system after ingesting it. To the contrary, latest research suggests that fluoride is linked to a number of neurological risk factors.

In an article, published in The Lancet, Philippe Grandjean MD from the Department of Environmental Health at the Harvard School of Public Health, and Philip Landrigan MD, from the Icahn School of Medicine at Mt Sinai, New York, state that industrial chemicals that injure the developing brain are among the known causes for the rise in prevalence. The study links the industrial chemical to the epidemic rise in neurodevelopmental disorders including ADHD, dyslexis and autism.

Grandjean and Landrigan postulate that there are even more neurotoxicants which remain undiscovered, and propose a global prevention strategy to control what they describe as the pandemic of developmental neurotoxicity. Anti-fluoridation advocates in Dallas might argue that there is now evidence that suggests, that the economic crisis that has affected the city’s economy since 2007 has had a beneficial impact on lawmakers common sense.