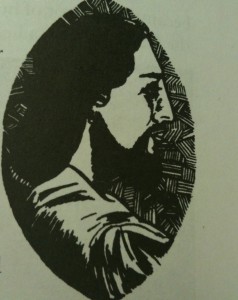 A real man do not belong to a nation, a race, a society, an ideal, or religion. A real man belong for the whole of humanity. ~Gnostic wisdom

In October of 2011 we published this article showing an ancient picture of what it appears being a real image of our Master Johsua Ben Bandera (Jesus), or IEOU= the Universal Christ.

This is a picture image of our Master, or Lord Johsua Ben Bandera, or Jesus, as he is call by religions. This image was carved in stone and then bought and hidden for thousands years somewhere in the country of Turkey. Johsua= Jesus taught the wisdom of the sun, or the science of Christic consciousness, or the science of true universal knowledge, where love reign.

Excerpt from The Perfect Matrimony by Samuel Weor:

God is love, and his love creates, and then creates anew.

YAHWEH is that terribly perverse Demon who tempted Christ on the mount and tempting him said: “ITABABO: All these kingdoms shall be given unto you if you kneel and worship me.” And Christ said: “Satan, Satan, it is written, you shall not tempt your Lord, your God, and only He shall you obey.”

THE CHOSEN FOLLOW THE CHRIST. The great majority of human beings fanatically follow Yahweh. Nevertheless, all hide behind the cross.

The columns of ANGELS and DEMONS fight against each other in the astral light. There is a demon facing each angel.

Every human being has a double, this is one of the mysteries of the twin souls. The Lamas say that DEVAHDET was the brother and rival of BUDDHA. DEVAHDET is the king of the Inferno.

The double is the same to its DOUBLE in every way. DOUBLES ARE ANALOGOUS, they have the same tendencies with the differences of the analogies of opposites. Facing a WHITE ASTROLOGIST there is a BLACK ASTROLOGIST. If a MASTER teaches WHITE SEXUAL MAGIC, his DOUBLE will teach BLACK SEXUAL MAGIC. Doubles are similar in every way but they are ANTITHETICAL.

The features and body of doubles are similar because they are twins. THIS IS ONE OF THE GREAT MYSTERIES OF OCCULTISM. Every white soul has a black double; a soul that is contrary to it and that antagonizes and battles it.

Love and counter love fight each other. ANAEL is the ANGEL OF LOVE. LILITH IS HIS SINISTER DOUBLE. LILITH REPRESENTS THE OPPOSITE OF LOVE. In ancient times the Great Theurgist Iamblichus invoked these two genies, and two children came out of a river, love and the opposite of love, EROS AND ANTEROS, ANAEL AND LILITH. THE MULTITUDES.

17 but of the tree of the knowledge of good and evil you shall not eat, for in the day that you eat of it you shall surely die.”

REVELATION describes a rider with a sash on his thigh in chapter nineteen. This sash has written on it in sacred characters the phrase: “KING OF KINGS AND LORD OF LORDS,” [Revelation] In reality, THE KING is not on THE FOREHEAD, but in SEX.