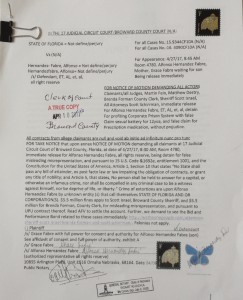 TO ALL THOSE OF CONCERN:

Enclosed you will find the documents written, and filed with the facts of the perjuries inflicted against Alfonso Hernandez Fabre by corporate police, and the corporate system that do anything to rescue the American people, and bringing them to their jurisdiction to make a profit with the private ledger accounts of individual. Inclusive of a female making claim being sexually abuse by Alfonso Hernandez Fabre, when for fact they were living together for short time or longer. This female that is Myrayda Ramirez Rios for fact, and as she specifically declares, loves getting intoxicated more than often. What we are bringing to the attention of all claimants is that it is difficult to make clear what anyone is saying being truth, when he/she is under the influence of alcohol. Further, and intentionally is on court records that this female is 12 years of age when the facts are proving she was at the time of her claim 22 years of age, and now she should be 23 years of age. Her birth date is 09/12/1992, exhibit B. Carefully read the entire exhibit B report about her claim in which she is absolutely making herself an idiot with the facts to prove it.  She is an evil female that cares not harming a young man’s life that she is infatuates with.

THIS incident was for them to solve themselves without involving criminals helping solving the issue, as for fact the police are corporate agents that are not in the best interests of the American people that are not aware of their malevolence intentions of cunning them to jail for profiting for corporations, of which THE STATE OF FLORIDA corporation is part of it. It is part of the corporate prison system and the people are its stock. Further, corporations and their agents as are the police, the BAR, and corporate judicial courtroom system disguise as government, and or Federal employees when the facts are they are neither one. They are criminals in violation of public peace, violation of public trust, and in contempt of the Constitution for the United States of America. No government and no constitution are there that have written as law for a mafia/anyone to infringe in the private affairs of any/the American people, let along charging them with crimes as their private territory is being violated, is beyond comprehension.

FURTHER, Alfonso Ramirez is being “charge with possession of prescription drugs.” For a fact, we have hard time understanding this claim by the “infringing police” that under any law written have the authority to violate the privacy of automobiles, papers, or the homes of American citizens, pursuant to the Constitution for the United states of America, Article 4, that states, “The rights of the people to be secured in their persons, houses, papers, and effects,

Against unreasonable searches should not be violated. For a fact, Alfonso Hernandez Fabre is not on records with prescription drugs with his name for Alprazolam or Oxycodone. If there it was such drugs at his car, as the police make claim of finding, it could have been left from one of his friends when he has let them sleep over in his car, or for that matter the police could off set him up just like they do many times over to the American people in order to have a “score of arrests for the day” as if they do not bring a number of arrests per day to their highest officer, they could not feed their family for the following week, or perhaps not holding a job. We most certainly do not trust savages. With being facts of NO facts, it is obvious that Alfonso Hernandez Fabre be clear from such of disturbing accusations from the police that are in violation of public peace, and violation of public trust.

FURTHER, and during the time of being in jail, the corporate courtroom judges sent him to rehabilitation at an awful place call “First Step” where the family paid $600 dollars a month for expenses, see exhibit C. At this place Alfonso was not accommodated properly, as that of sleeping on a couch; had to beg for something to eat, and at the same time being harassed by staff because having sexually assault a 12 year of age! Further, when the program ended, he asked if he could leave the premises; the supervisor said he could, and handling him a diploma. However, when he went to court to see the judge to inform the court the program has ended, in that instant they arrested him. According to our research, First Step is run by alcoholics, and funded by the inmate themselves with their private account that only the criminals OF THE CORPORATIONS can access. With this being said, the program was being funded twice by Alfonso Hernandez Fabre, and ALFONSO HERNANDEZ FABRE, Great try, is it not?

A FINE of $1.5 million is apply to First Step for intentionally and deliberately harming Alfonso Hernandez Fabre, a young man that have done no harm to anyone.

FURTHER, THE STATE(COURT) provided Alfonso with an attorney that did nothing for him…, and then the family hire private attorney that name is Scott Schirrman, a guy that have taking $4000.00(four thousand) dollars from Grace Fabre (see exhibit C), the mother of Alfonso Hernandez Fabre, and he has done nothing for Alfonso either. His negligence is beyond crimes; thus we are commanding Scott Schirrman to do the job he was paid to do. WE want for him, and along with all those that are in the business of enslave the American people, to immediately release Alfonso Hernandez Fabre from the confinement he finds himself in, and without prejudice, and pursuant to the UPU contract thereof.

FURTHER, we command the court to give us the Bid and performance Bond related to these cases, immediately. Moreover, an accepted for value authorization has been filed, and any debts by ALFONSO HERNANDEZ FABRE are being settle.

A fine of $5.5 million apply for Broward County Sherriff Scott Israel for crimes of misleading misrepresentation, and fraud. $5.5 million fines apply to Brenda Forman, Broward County Clerk for misleading misrepresentation, and fraud. A $1.5 million fine apply to First Step for deliberately, and intentionally causing harm to Alfonso Hernandez Fabre by committing crimes of subjugation, coercion, and constructive fraud, pursuant to Title 18 U. S. & 1001; 15 U.S & 1692e, and pursuant to Article 4 of the Constitution For the United States of America thereof.

WITHOUT PREJUDICE we the Hernandez family are demanding the release of our dear Alfonso Hernandez Fabre, a young man that have committed no crime to anyone and most certainly not to a corporation(s) call STATE OF FLORIDA. We fear for his life and health, and it is our heart and soul concern that he is release immediately from the confinement he is in.

DULY sworn as true and correct, executed on this 04/08/17 with all rights reserve including the rights to make final determination of all definitions and intent stated herein, without prejudice, public policy UCC 1-308, any and all “STATE OF…”

We repudiate any presumption and return it to the unlawful government acting as plaintiff, and unlawful defendants as “Accepted for Value by Grantee, returned for value by Grantor- Settlor, on special deposit without recourse.” It is ORDERED: discharge obligations, presentments bonds, fees, taxes, tithes to extinguish the Debts and settle the Account of 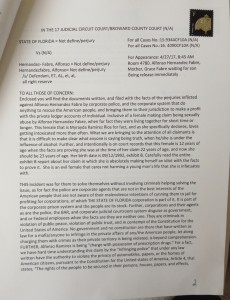 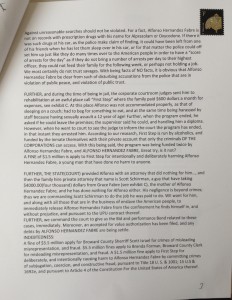 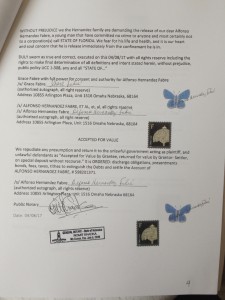 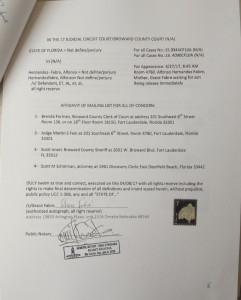 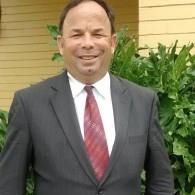 This is Scott Schirrman,the attorney that represents Alfonso Hernandez Fabre.