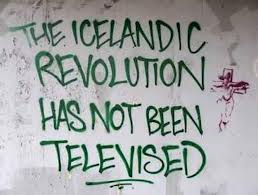 Iceland is perhaps to become the model on how to handled high level banksters committing illegal activities and fraud as the reports and video seen below will show.

Iceland is perhaps to become the model on how to handled high level banksters committing illegal activities and fraud as the reports and video seen below will show.

“The truth of the matter is… No one, except the Icelanders, have to been the only culture on the planet to carry out this successfully. Not only have they been successful, at overthrowing the corrupt Gov’t, they’ve drafted a Constitution, that will stop this from happening ever again.

“That’s not the best part… The best part, is that they have arrested ALL Rothschild/Rockefeller banking puppets, responsible for the Country’s economic Chaos and meltdown. Last week 9 people were arrested in London and Reykjavik for their possible responsibility for Iceland’s financial collapse in 2008, a deep crisis which developed into an unprecedented public reaction that is changing the country’s direction…”

Criminals are criminals and should be treated as such. It should not matter how high up the ladder they are in leadership positions, in any country, “we the people” can do what the people of Iceland did, not just to criminal bankers, but to our criminal politicians.

Not only can we, but we should. It is our responsibility to hold criminals in government accountable, an obligation citizens of the US have not lived up to.