Yet Another Banker Jumps! 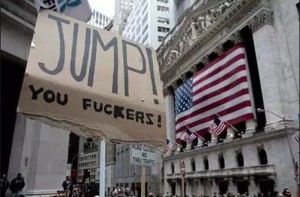 We are most delighted to announce that yet another Banker jumps!

However, lets also remind our readers that since 2012 at least one thousand of them have suddenly died, killed themselves on some strange circumstances…, and many never were reported…, others, we guess their family were too embraced to make the situation public and instead made everyone believe he/she died of a heart attack!

BUT one thing no one is aware is that these demons bankers were all demons attorneys, the same perpetrators of all crimes that as well were involved in child genocide, local and world wide.

These fuck tarts made everything easy for their thirsty clientele that were the pedophiles blood drinker killers of our children. And of which the judicial system, the police, and all politician (with the exception of a few) are all involved.

We have you cover

The same fucking Jews that have kept our people enslaved so they can be call the “chosen ones”, the same ones that follow no laws except their own.

The same ones that we the people are going to destroy until there it is no one alive.

We fucking make sure this it will be done.

For one thing, one or maybe even two suicides connected with Madoff I can believe could be written off to feelings of guilt and depression. But four? Bluntly put, this looks to be more like “house cleaning” and “loose end tidying” than anything else. The question is, why?

The sad list of bankers taking walks off of rooftops continues to grow, this time with the death of Charles W. Murphy. Many people shared this story this week (and a big thank you to them all), and at first glance, there’s “nothing unusual” in the story:

Partner At Paulson & Company Jumps To His Death In Midtown Manhattan

Toward the end of this article, it is suggested that Mr. Murphy may have been experiencing financial difficulties, hinting that this may have been a motivation for his death, as he was also apparently being treated for depression:

It appears that at least part of Murphy’s troubles have been financial: a parking attendant at a nearby garage told the New York Post that Murphy’s wife, Annabella , crashed their Honda Odyssey last summer but could not afford to fix it. ‘She didn’t even have enough money to pay for the damage,’ the attendant said.

Murphy’s first wife, former Heather Kerzner, got married to hotel billionaire Sol Kerzner after the pair split. They were married for 11 years before their marriage ended in divorce.

According to the Daily News, Murphy was being treated for depression before his suicide.

Murphy is now the fourth person connected to Madoff to commit suicide in the years following the Ponzi scheme scandal.  French aristocrat Rene Thierry Magon De La Villehuchet was found dead in 2008 just after the news broke. His AIA Group lost $1.5 billion. Ex-U.S. Army major William Foxton, 65, killed himself in 2009. A year later, Madoff’s son Mark was found dead after he hanged himself in his New York apartment.

Murphy was previously a research analyst at Morgan Stanley, and was cohead of the European financial institutions group at Credit Suisse.  He graduated from Harvard Law School and MIT Sloan School of Management according to the Mail.

Making this story even more bizarre, for some reason the unfortunate Mr. Murphy chose a venue that was not far away from his personal apartment, and one that had yet another strange connection:

The Sofitel hotel where Murphy killed himself made headlines in 2011, when French politician and head of the IMF, Dominique Strauss-Kahn, was accused of raping a maid in one of the hotel’s suites. Three months later, all charges were dismissed. In 2012, he settled a lawsuit with the maid.

In all of this I cannot stifle the thought – in spite of the best efforts to make this look like nothing more than a depression-suicide, perhaps brought about by monetary difficulties and depression, and perhaps even depression and/or feelings of guilt for being connected to Bernie Madoff – that there is much more here than meets the eye.  Yes, my “high octane speculation” motor is running in high gear. For one thing, one or maybe even two suicides connected with Madoff I can believe could be written off to feelings of guilt and depression. But four? Bluntly put, this looks to be more like “house cleaning” and “loose end tidying” than anything else.

The question is, why?

One answer is suggested by the following:

There we read the following paragraph:

On March 12, 2009, Madoff pleaded guilty to 11 federalfelonies and admitted to turning his wealth management business into a massive Ponzi scheme. The Madoff investment scandal defrauded thousands of investors of billions of dollars. Madoff said he began the Ponzi scheme in the early 1990s. However, federal investigators believe the fraud began as early as the mid-1980s[16] and may have begun as far back as the 1970s.[17] Those charged with recovering the missing money believe the investment operation may never have been legitimate.[18] The amount missing from client accounts, including fabricated gains, was almost $65 billion.[19] The Securities Investor Protection Corporation (SIPC) trustee estimated actual losses to investors of $18 billion.[18] On June 29, 2009, Madoff was sentenced to 150 years in prison, the maximum allowed.[20][21]

Stop and ponder that for a moment: Madoff’s scheme, which stole billions of dollars from investors through fraud – may have begun in the 1970s, and perhaps even as far back as the founding of his company in the 1960s. And this raises a very important question: in all that time, no one in the federal regulatory agencies ever found anything suspicious about his activities? It was only uncovered when Madoff’s sons went to the feds and disclosed it, resulting in Madoff’s arrest the very next day? (Let that one sink in for a moment too.) There’s only three ways such an arrest would have happened without a long investigation: either (1) the sons brought absolutely convincing proof with them when they complained to federal authorities, or (2) there may have been a quiet investigation proceeding secretly, and they simply provided the final bit of evidence needed for an arrest, or (3, my own suspicion) Madoff’s operation had proceeded all those years with the connivance and blessing of some faction within the federal government, a faction dispersed throughout various agencies.

Why do I suspect the latter? Because the time frame suggested in the Wikipedia article about the beginning of Madoff’s “operation” the 1980s and 1970s, were the same time period(s) that others have suggested that the vast mortgage fraud pump-and-dump schemes began in federal housing programs; similarly, it was the same time period – the 1980s – that others suggest that a vast financial scheme, involving fraudulent securities and billions of dollars, was concocted by the American “intelligence ‘community’” to wage a fatal economic war on the Soviet Union, a scheme that was also connected to the financial dealings and suspicions many have raised surrounding 9/11 (and don’t forget that Deutsche Bank connection there!).

So the bottom line to my “high octane speculation of the day” is that this death is connected to all the others, for reasons we may never know. Perhaps Mr. Murphy found something and had to be “suicided”, or perhaps he found something so chilling and/or depressing that he took his own life. Or perhaps he knew something that he didn’t even realize the significance of, and was a loose end to be “cleaned up”. But whatever happened, I strongly suspect there’s a much bigger story to all these banker deaths and “suicides”  – particularly in the pattern exhibited over and over, of bankers walking off of rooftops from London to Paris to Hong Kong – than meets the eye.

See you on the flip side…