United States of America INC.Registered in Delaware as a Religious Non Profit Corporation 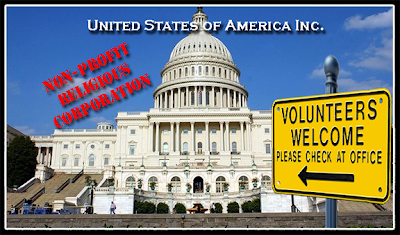 If you’ve been wondering how the Pope Francis recent Apostolic Letter regarding the Roman Curia law removing legal immunity and liability from governments, attorneys and judges, might affect governments around the world, then read on. I got many inquiries asking for how a Roman law can affect an ostensibly secular government.  And that’s a far enough question…and I couldn’t remember the exact reason in law why that was true, so I asked a friend who I knew would know.

I got this reply from a friend well versed in law and the history of the legal systems:

It pre-dates this but in looking to John the Noble (King John) before the Magna Carta, He was trying to break away from the Vatican back in the middle ages, I can get dates later.

[The] Pope … stuck King John’s balls to the fire with the king’s nobles by threatening to excommunicate him and all of England if he did not pledge fealty to the Papal SEE (and money- land).

The nobles threatened to wage war to dethrone him. He caved. Hence the Papal SEE took over the title to the land of England and its wealth. From that sprang the Magna Carta several hundred years later.

In fundamentals of law class I learned that Roman Law is a foundation of modern law (not Natural Law –  2 different entities). Later on Church law became the overseer of that existing law. Papal Bulls took over around 1455 which is much like the current Executive Orders each succeeding tyrant signs to circumvent the constitutional; based law here.

I knew the deed for Washington DC was held at a Catholic Diocese (read thread found HERE):

….from the D&B sponsored Mantra Corp website, linked below:
If you click on the “Government of the United States HQ” link, you’ll see another website page with some fairly detailed—and possibly bewildering—information. For example, you’ll see that this “Government of the United States” has its address at:“The U.S. Capitol“Washington, DC 20515-0001”Its phone number is “(202) 224-3121”. Business Hours are “24/7”.You can click the “map” link and see a graphic indicating that this “Government” is located on “Capitol Hill” (same place as Congress) in Washington DC.None of that seems particularly surprising (other than the idea that our “Government” might be a “company” and/or a conglomerate of “companies”). But the Manta.com report does begin to seem a little strange under the heading “About Government Of The United States” where we read:“government, owner Archbishop Deric R. McCloud of Basilica Shrine, Michigan and 4th NE Street, Washington,DC”.

I wasn’t aware the purported “government” was registered as religious non-profit corporation in Delaware. This was sent to me today… given the above it’s really not surprising I suppose….but here it is in black and white!