The American people are not going to celebrate the illusion of Independence from the zionists criminals from the British Empire along with the Chinese zionists, and the colossal worldwide Israelis zionists mobs from the suppose state of ISRAEL within the country of Palestine. We are much sick with the hypocrisy.

We command our nation be free from the invasion, and violation. We command the sovereignty for our nation, its people, and our constitutional laws be honor, and those that violate it should be put to death. Our nation is a Constitutional Republic. Freedom= sovereignty.

We command for the poverty within our nation be cease and desist, as homelessness is rampant, and the average people are hardly making it from one day to the next. Our people are starving to death,+ and our homes are still being seized by the BAR, and the zionists court system that disguise as the people’s court. We command all homes: properties that have been taking by these criminals with arbitrary decisions be return back to the original owners, without prejudice.

We command the cease and desist for using our people, our lands, and our belongings as public property by the zionists mobs that are foreign, and domestic such as politicians, corporations, and clergies, etc., that disguise as public servants.

We command all that was taking from us be return back to us, as it is our wealth= our value that has been serving the worldwide demonic criminals instead of us. We command the issuance for the unlimited and unfettered Original Account for each American without prejudice as soon as possible so this can ease the insanity from the scarcity for our survival.

We command the prisoners that are in jail for profit be release without prejudice, and with prejudice immediately.

We command the highest protection for our children from demonic snake agents as are teachers, doctors, politicians, and clergies all ways always. We command the closing down for Plan Parenthood, all abortions clinics, and Transgenders centers immediately. We command the complete dissolve for the allege corporal USA. We command the arrests, and execution for all GMO so call zionists corporal scientists that are harming the [natural] seeds for our humanity survival as are corn, rice, beans, wheat, potatoes, tomatoes, cotton, and etc., with genetically modified organisms that are lethal for our human body, and all creatures, inclusive bringing infertility for men, women, and all creatures. The GMO facilities that are now own by Bayer from Germany must cease and desist immediately worldwide. Let natural farming be done by the local communities across the planet.

Let this July 4th of 2019 be the beginning for our true Independence from the zionists invaders,+ and the path for a better future for the American people, and the entire world, where the rule of law, and moral values reign. Let the light shine over the darkness perpetuity. So be it!

A view of almost half a million people [below] that went to Washington at the Lincoln Memorial celebrating the True Independence Day from England that took place on July 4th 2019! A day for all the American people to remember eternally. You might ask, so what was all those years  that we celebrated Independence Day? Well, that was only an illusion because all along we were subject to the English Empire. Hard to believe, is it not? FOR now on forward, the game is OVER starting on this July 4th of 2019. Be very glad to have witnessed this magnificent event! Celebrate. Celebrate!

Look forward to great: many, many changes ahead within our country, and the world because we are on our own for now on as the leading nation all ways always. We did it! Congratulations everyone! A new path has arrived. ~ LFabre 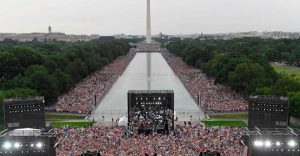 And even the tallest building in the planet display the American flag  as an honor for the occasion on the True Independence Day for the United States, and its people, in Dubai, the United Emirates. 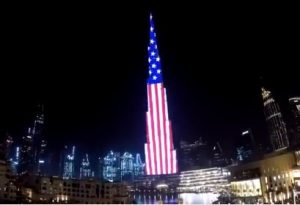 A clip from the speech by president Trump on the 4th of July, 2019

Excerpt from “I have a Dream.”

a vision of the Freedom that is coming —

My country ’tis of thee, sweet land of liberty, of thee I sing.

Land where my fathers died, land of the Pilgrim’s pride.

From every mountainside, let freedom ring!

And if America is to be a great nation, this must become true.

And so let freedom ring from the prodigious hilltops of New Hampshire.

Let freedom ring from the mighty mountains of New York.

Let freedom ring from the heightening Alleghenies of Pennsylvania.

Let freedom ring from the snow-capped Rockies of Colorado.

Let freedom ring from the curvaceous slopes of California.

But not only that:
Let freedom ring from Stone Mountain of Georgia.

Let freedom ring from every hill and molehill of Mississippi.

From every mountainside, let freedom ring.

And when this happens, and when we allow freedom ring, when we let it ring from every village and every hamlet, from every state and every city, we will be able to speed up that day when all of God’s children, black men and white men, Jews and Gentiles, Protestants and Catholics, will be able to join hands and sing:

The storm has arrived. be vigilant. be patriotic with courage. be responsible. be united as ONE for our own empowerment, and with due diligence, and sovereignty for all. The storm is within. The storm is without The storm will passed and peace would be restore within ourselves, within our country, and worldwide. So be it.

And the levee broke and all is going down. down. down. Crying would not help you, and praying would do you no good…. Good bye zionists war criminals pedovores from England! Good bye BAR! Good bye bankers cabal! For all that does not serve the goods be all cease and desist. So be it!