Transferred Title of Property Without Prejudice

:THIS Contract made this day of 28th of February 2017 Between Alma HF Trust, Grantor, and IUV Trust, Ramona Fabre, Audrey Almeida, and Antonio Ramirez, all rights reserve, Grantees whose address is 149-39 83 Street, Howard Beach New York 11414, without prejudice.

:As party or parties of the second part, hereinafter call Grantees (the words “Grantor” and “Grantees” to include their respective heirs, lawful representatives, trust, trustees, and successors where the context requires or permits).

:WITNESSETH that: Grantor for and in consideration of the sum of Ten Dollars ($ 10.00) and other good and valuable considerations in hand paid at and before the sealing and delivery of these presents, the receipt whereof is hereby acknowledged, has granted, bargained, sold, aliened, conveyed, and confirmed, and by these presents does grant, bargain, sold, alien, unto the said Grantees the following described land, situated lying, and being in Broward County, Florida to-wit:

:And the grantor hereby covenants with the said grantees that the grantor is lawfully seized of said land in trust, that the grantor has good right and lawful authority to sell and convey said land; that the grantor hereby fully warrants the Title to said and will defend the same against the lawful claim of all persons whomsoever, in witness whereof, grantor has hereunto set grantor’s hands and seal the day above written, willingly, and intentionally align with common, and natural law, protected under the Constitution For the United States of America, Article 4, Section 3, Clause 1; insured and secured by public law policies of UCC 1-103 of public law, and Universal trust law of Doc# 2013032035 thereof, and without prejudice.

: LET IT BE KNOWN to all alive and dead that this property is unalienable, without prejudice.

: LET IT BE KOWN to all alive and dead that the owners of this property do not consent of any invisible, arbitrarily, or unauthorized contract against this property by corporate terrorists’ agents, warmongers, and perjurers such as foreign agents as judges, esquires/attorneys that are committing commercial war crimes against the American people of willful identity theft, violation of public peace, violation of public trust, infringement, malfeasance, extortion, and that are whores of DEED FRAUD.

:ANY contract pertaining to this property would have to be authorized by the owners, and or ONE of the owners acting as representative of property. This representative would have to sign and display a CODE that all owners would need to know when signing a contract concerning this property, and with wet-ink pen signature, and a mutual contract between two party. The code could be a word or a number, and it must be displayed following his or her signature. This CODE is equal to all owner’s signatures, and without prejudice.

:THIS property does not pay any maintenance fee due to the fact of having a credit balance of $20, 680.47 cents that started to be deductible on January of 2017, and with a yearly deduction of $1, 020 dollars yearly, or $340 dollars a quarter, or $85 dollars a month. After this amount is deducted, then a new contract would start automatically for the same amount stated, and for the next twenty years, due to an outstanding balance of $350, 000 (three hundred and fifty thousands) dollars that are due from the corporation of MHCAI (Monroe of Hollywood Condominium Apartments Inc.), and its owners, the Pereira’s family= Shaun Pereira: Michael Pereira: Elva Castillo: Rafael Castillo, and Rosemary Blank, a public notary that more than twice has been calling our personal phone threatening us that our property has been sold. This amount is only a small portion from the entire amount that adds up millions for the liability, accountability, and responsibility of committed commercial war crimes against our family, inclusive of intentionally DEED FRAUD.

: IT IS KNOWN for a fact that some known and unknown entities give order and or take order to shuffle public records around in order to commit crimes of violation of public peace, violation of public trust, and Deed Fraud. KEEP public records in the right place. We paid you for the public service within your private corporal agency, and for you to do the right thing. Infringement Not Apply.

Unit 208, of Monroe of Hollywood Condominium Apartments, A Condominium, according to the declaration of condominium thereof, recorded in official records Book 4005 at Page 242 at the Public Records in Broward County, Florida, with all rights reserve.

:DULY sworn as true and correct, executed on this date of February 28th of 2017 with all rights reserved including the rights to make final determination of all definitions and intent herein, without prejudice, public policy UCC 1-308.

:Published worldwide here: http://wetheonepeople.com/transferred-title-of-property-without-prejudice/ , and at the private and public corporation of the State of Florida: Broward County Public Records agency that disguise as a government agency for the people when the facts are that it is NOT. For Instrument#114264478

NOTE: These documents are being republish due the fact for some technical issues with our website. The original publication was published on February 28th 2017, as it on public record worldwide.

AS recorded at private Broward County public records, for the records only, and paid for the service. 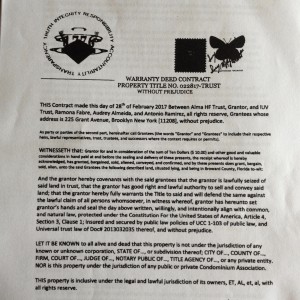 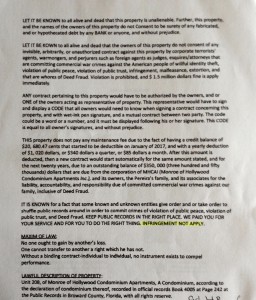 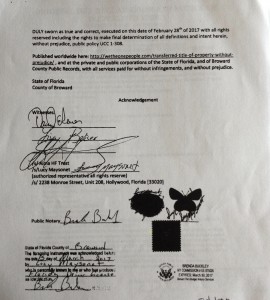