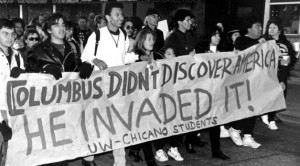 ~ – = For the collective consciousness of the People do not consent for celebrating= honoring such entity as Christopher Columbus, a murderer along with the few that are with covert terrorism in the country for the united states of America, and or the entire American Continent.

For Columbus did Not discover America, he invaded It!

Video: Watch the atrocities done by the US corporation, = the so call federal government that the facts are, is a terrorist organization. FOR BE destroy.

~ The people have spoken.