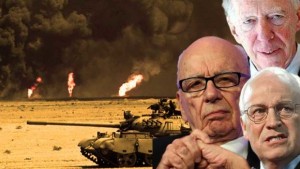 A former CIA director, former US vice-president, banking tycoon and media mogul sit on the board of an oil company on disputed land between Israel and Syria – so how is this not more of a talking point?

The bloody conflict in Syria has been the subject of global attention since 2011, as some of the world’s major players continue to do battle for their respective geopolitical interests.

From the initial uprisings in Homs, the battles in Aleppo to the siege of Ghouta, various parts of the nation have led primetime debates and dominated front pages, thus becoming instantly recognizable to the general public.

Yet a hugely important region involved in the conflict has managed to evade such attention, and it comes as little surprise upon closer inspection of what is at stake both politically and financially.

The Golan Heights is a disputed territory between Syria and Israelwhich lies in the middle of the two countries. The land was occupied by Israel after the six-day war in 1967, who then annexed the land in 1981, though the move has not been internationally recognized and Syria still demands its return.

Where things start to get interesting is the discovery that the region is home to massive quantities of oil and gas, and the plot thickens upon closer inspection of the company which stands to profit from the major find.

It gives a clear indication that the Golan is not only a region affected by the war, but a major reason for international pressure for it long to continue, implementing regime change at the expense of Bashar Al-Assad.

Headquartered in the United States, Genie Oil and Gas holds extraction rights over a 153 square-mile region in the disputed area, while its Israeli subsidiary, Afek Oil and Gas, was the company which revealed the discovery of reserves “about 10 times larger than the global average”.

The very fact that an American company is involved in the extraction of oil and gas of a disputed territory is questionable, though not uncommon. Where the real red flags are found are on its strategic board.

With renowned figures in the political, financial and media sector on its board, Genie Oil has strategically entrusted in key people who will encourage the need for western intervention in their respective sectors while at the same time keep the talk of the disputed region out of the public spotlight.

What more effective way to garner public support for starting another illegal war in the Middle East than by having one of the most influential media moguls on the planet banging the war drum on a near daily basis?

Murdoch’s power over English-language newspapers, publishers and TV channels is unrivalled. From BSkyB, The Times and The Sun in the UK, the FOX network which includes FOX News, Dow Jones, The Wall Street Journal, New York Post and National Geographic in the US to the Daily Telegraph and Herald Sun in Australia, to name just a few, the 87-year-old has first-hand access to the minds of millions.

Interestingly, he is not just a board member but a stakeholder. In late 2010, Murdoch teamed up with Lord Jacob Rothschild to buy a 5.5% stake in the company worth around $11 million.

He is the youngest son of James Jacob de Rothschild, who was a patron of the first settlement in Palestine, who bought parts of the land from Ottoman landlords which now makes up present-day Israel. His family also was behind the Balfour Declaration that helped pave the way for the creation of Israel.

When it comes to using political influence to snap up big oil contracts, look no further than Dick Cheney.

Cheney was the president and CEO of Halliburton from 1995 to 2000, one of the world’s largest oil and gas companies.

In 2001, he became the vice president of the United States under George W. Bush. Soon after, Halliburton just happened to be awarded a $7 billion contract in Iraq for which it was the only oil company allowed to bid.

Director of the Central Intelligence Agency from 1993 to 1995, Woolsey maintains his power over oil policy as co-founder of United States Energy Security Council.

Back in 2003, Woolsey spoke about the need to “exert pressure” on North African and Middle Eastern regimes, specifically about Libya and Syria, which he described as “rogue states”.

Other board members include Larry Summers, Secretary of the Treasury during Bill Clinton’s presidency and Director of the National Economic Council for Barack Obama, and Bill Richardson, who was the former US Ambassador to the UN, Energy Secretary in the Clinton administration and a member of the Council on Foreign Relations.

The current president of Genie’s Israeli affiliate company Afek Oil and Gas, which made the huge oil discovery in the Golan in 2015, is Efraim Effi Eitam, a former Israeli military commander who called for expelling Arabs from Israel.

The financial and political significance of the Golan Heights cannot be understated – as well as the billions of dollars set to be made from the oil and gas itself, the conflict in Syria is a unique opportunity for Israel to gain a stronger foothold on the region.

When such prominent figures sit atop a company with significant land and oil to rule – who have a vested interest as well as a conflict of interest – it becomes ever more apparent that the war in Syria is more about the region’s natural resources than fighting terrorism.

This is a carefully selected all-star lineup with a proven track record when it comes to influencing public opinion, shifting global policy and snapping up oil contracts on foreign land. The fact that this has largely remained under the radar despite being such a prominent reason for the ongoing war in Syria proves that the plan is, so far, working to a tee. ~ I Am Awake