THE PEOPLE’S ENEMY: MESSAGE FOR YOU 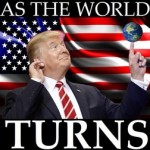 : Not only set straight the propagandists, lying whores “call journalists” that main aim is deceiving the American people+ inciting violence+ hatred+ division among us, >> but also destroy them. Eliminate them+ holding them accountable for disguising as real journalists when the facts are they are television entertainers lobbyists clowns whores working for criminals that hold no moral values, + have no idea of the ethics for journalism.

Yes, they are the people’s enemies, > isn’t not?

America, discern anything that these “false journalists” are saying. Do your own diligence. + aim at taking down what is not serving the greatest good.

:The time has come for us all being our own journalists. Our own investigators. Our own guards.

~ – = For journalism have nothing to do with entertaining the audience with magniloquence rhetoric from the obvious Sick. Criminals. Warmongers.

And this video below is for those that know who THEY are: