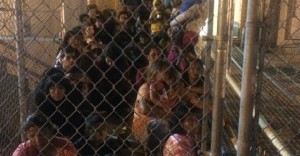 These atrocities are committed by the former, “the United States Inc”., the one we call government in Washington DC., and  that is now being call, “America is Great,” and its agencies, and agents that are in the business of terrorism for profit, jail for profit, killing for profit, pedophilia for profit, human trafficking/harvesting for profit (meaning they kill an adult, then take their organs and sells them), refuges for profit, religions for profit, drug trafficking for profit, and fake news for profit.

Now you can start seeing the picture of the fraud, and the refugees scam.

These are the same people that steal your property if you are behind on your mortgage, and or steal your children, etc., etc…The mortgage scam is beyond comprehension, as there it was never a loan, never. The instant we buy a home, that property you paid for it, pursuant to the fact that we as citizens of this country are inherent of the land, and we not need to pay for it, thus it is arranged that when we supposedly purchase a home, automatically it is paid; it is prepaid, same with college education, credit cards, car loans…, all is prepaid, and guess who decided to enslaved us, the United States, Inc, the BAR, the Vatican, and the Netherlands.

The world of corporations, and politics that follow no constitution or laws except their own that they fabricated; and protected by theirs unconstitutional judicial system of fraud, and  agents that disguised as our lawful government, and protect their criminals.

However, this is coming to an END.

U.S. immigration authorities rounded up hundreds of undocumented immigrants across six states in the last week, which begs the question — where do they go?

The detention centers maintained by U.S. Customs and Border Protection (CBP) are home to some of the most inhumane prison conditions in the entire country. Immigration and Customs Enforcement (ICE), which operates under the umbrella of the Department of Homeland Security, has very little accountability for the conditions of its detention centers, since the people being held are not U.S. citizens or legal immigrants, by default stripping away most of the Constitutional rights guaranteed for prisoners.

One of the busiest corridors of the U.S./Mexico border is in what CBP refers to as the Tucson Sector of Arizona, in which border patrol agents rounded up approximately 200,000 people in the last two years alone, according to a legal complaint filed by the National Immigration Law Center (NILC). Those who are detained are housed in CBP facilities that are only meant for a 12-hour stay or less before undocumented immigrants are sent to other detention centers, or appear in immigration court.

According to the NILC complaint, which was filed on behalf of several detainees housed in the Tucson Sector, conditions at CBP facilities are hellish, with several dozen detainees crammed into cells only meant for a handful of people, often stacked on top of one another or in extremely close proximity. The plaintiffs allege they’re held for as long as 72 hours or more, even though the Department of Homeland Security’s own 2008 guidelines say the cells aren’t meant for more than a 12-hour processing period.

The cells are also colloquially referred to as “hieleras,” (“iceboxes” in Spanish) due to how cold they are. The 2015 complaint, which named Obama administration Homeland Security Secretary Jeh Johnson as a defendant along with several others, alleges that detention center workers use the cold temperatures as a punitive punishment for detainees:

Defendants expose Tucson Sector detainees to painfully low temperatures without proper clothing or blankets. Indeed, CBP officials force detainees to remove extra layers of clothing before entering the frigid cells. CBP officials regularly ignore detainees’ complaints about the cold cells, and it has been reported that officials threaten to make the cells even colder as punishment for complaining about the temperature.

“You have agents that are wearing their boots, gear, and bulletproof vests and running around in the desert,” Jennifer Podkul of the Women’s Refugee Commission told Mother Jones. “A comfortable temperature for them is different for a person who’s been in the desert for several days, is wearing a tank top, and is very, very sweaty—and then sits there for two or three days.”

“I’ve talked to children who took the toilet paper they got and laid it on the floor and laid down on that, because it’s one barrier between them and the cement floor,” she added.

However, the harsh conditions aren’t limited to the Tucson Sector. At the Berks County Residential Center (BCRC) in Pennsylvania, 40 families are held, awaiting appearances in immigration court. According to NBC Philadelphia, a 40-year-old guard was only given 23 months in prison for raping a 23-year-old Honduran immigrant detained at the BCRC. Guards also allegedly subject detainees to sleep deprivation:

Some of the youngest detainees at the BCRC have spent half their lives in detention, according to multiple attorneys working with the families. Activists and lawyers worry that conditions are not suitable for children — they are woken up every 15 minutes during bed checks, do not have access to home-cooked meals and can only go outside with guard supervision.

Here are 11 heartbreaking photos of detention and deportation holding facilities from around the country. 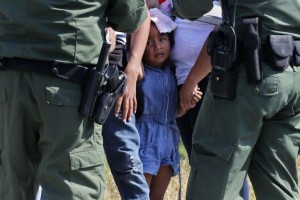 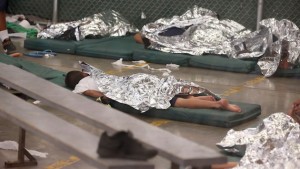 Children sleeping on mats and mylar blankets at a detention center. Photo originally published in the Houston Chronicle 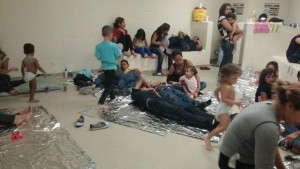 Women and children in a detention facility. Photo originally published by the Houston Chronicle 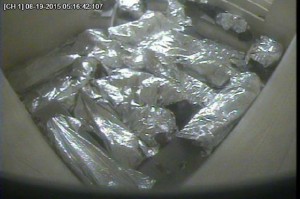 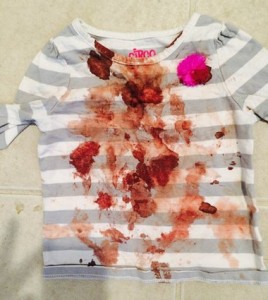 A shirt worn by a child detainee who threw up blood for four days before being allowed medical attention. Photo by Guardian 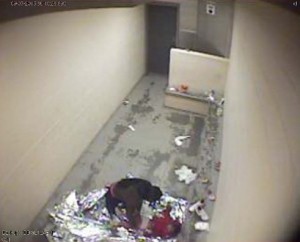 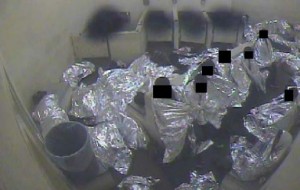 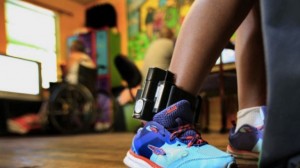 A child wearing an ankle monitor at the South Texas Family Residential Center, owned by Corrections Corporation of America 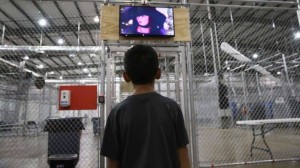 A child detainee watching television at a family deportation center in Berks, Pennsylvania

An armed Customs and Border Patrol agent keeping watch over detainees. Photo by US CBP

Tom Cahill is a writer for US Uncut based in the Pacific Northwest. He specializes in coverage of political, economic, and environmental news. You can contact him via email at tom.v.cahill@gmail.com, or follow him on Facebook.