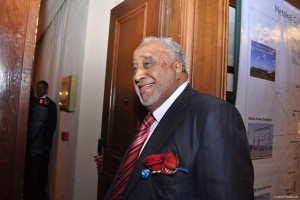 While bin Talal’s arrest has gained most media attention. Al-Amoudi’s arrest is especially important because it could potentially destabilize the economy of an entire country, according to Middle East Eye.

Al-Amoudi, who is also known as “the Sheikh”, has invested in almost every sector of Ethiopia’s economy, including hotels, agriculture and astrology.

According to a leaked diplomatic cable from 2008 “the Sheikh’s influence on the Ethiopian economy cannot be underestimated.”

In the nearly ten years a since then it has become even harder to estimate the exact value of Al-Amoudi’s total investment in Ethiopia, which is among the fastest developing countries in Africa. One analyst estimated the value of the Sheikh’s investment at $3.4 billion, which represents 4.7 per cent of Ethiopia’s current GDP.

Another said his companies employ about 100,000 people, which represent 14 per cent of the Ethiopian private sector, according to the latest Labour Force Survey, 2013. However, World Bank analysts warn that these figures might have markedly increased over the past four years as the sector has developed since then.

Al-Amoudi has occupied the front pages of Ethiopia’s most prominent magazines since his arrest. News agencies have covered news of his detention, including the rumours that have been circulating on social media websites, as breaking news.

“They are now panicking” said Henok Gabisa, a Visiting Academic Fellow at Washington and Lee University School of Law in Virginia and an Ethiopian researcher.

In the few days after Al-Amoudi’s arrest, Ethiopian Prime Minister Hailemariam Desalegn felt the need to hold his first press conference in two months. During the conference, he answered questions related to Al-Amoudi and stressed that the government does not believe that this will affect Al-Amoudi’s investments in Ethiopia.

An Ethiopian Investment Authority official rejected the notion that Al Amoudi’s arrest might create chaos in the government, “The country’s economy is not based on one investor. For heaven’s sake, we are 100 million people, how can we depend on one investment?! This is funny.”

“Investments outside Saudi Arabia that are owned by the Sheikh have not been yet affected by these changes,” said Tim Pendry, Al-Amoudi’s spokesman in the UK.

Although they acknowledge that Chinese people who are heavily investing in Ethiopia have now a much larger stake than Al-Amoudi in Ethiopia, analysts suggest that even if the government is not in a state of panic at present, there would definitely be future concerns about the extent to which a conflict with Saudi Arabia would affect the Ethiopian economy.

He is a person whose presence or absence might affect the country’s economy.

He added: “He has an impact and in light of all the problems that are associated with his investments in the country, this makes him an influential figure.”

Al-Amoudi is thought to be worth $10.9 billion and was the first to donate to the Renaissance Dam campaign launched by the late Ethiopian Prime Minister Meles Zenawi and to give the Ethiopian government $88 million to build it.

He is thought to be the richest man in Ethiopia and the second richest in Saudi, after Prince Al-Waleed Bin Talal who was also arrested on Saturday.

Al-Amoudi owns a wide range of companies in the fields of construction, energy, agriculture, mining, hotels, healthcare and manufacturing.

He was arrested as part of a crackdown in Saudi Arabia, which has consolidated Prince Mohammed Bin Salman’s power while alarming much of the traditional business establishment.

A no-fly list was drawn up, as a result of the arrests, and security forces in some Saudi airports were barring owners of private jets from taking off without a permit, pan-Arab daily Al-Asharq Al-Awsat said. Among those detained are 11 princes, four ministers and tens of former ministers, according to Saudi officials. It is thought that in total 500 people have been detained as a result of Saudi’s “anti-corruption” drive

The allegations against the men include money laundering, bribery, extortion and taking advantage of public office for personal gain, a Saudi official told Reuters.

A royal decree on Saturday said the crackdown was launched in response to “exploitation by some of the weak souls who have put their own interests above the public interest, in order to, illicitly accrue money”.

The new anti-corruption committee has the power to seize assets at home and abroad before the results of its investigations are known.