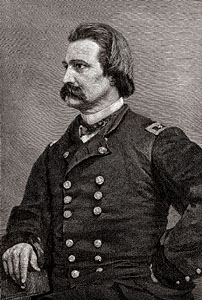 Regardless of the exact date or location of its origins, one thing is clear – Memorial Day was borne out of the Civil War and a desire to honor our dead. It was officially proclaimed on 5 May 1868 by General John Logan, national commander of the Grand Army of the Republic, in his General Order No. 11, and was first observed on 30 May 1868, when flowers were placed on the graves of Union and Confederate soldiers at Arlington National Cemetery.

The first state to officially recognize the holiday was New York in 1873. By 1890 it was recognized by all of the northern states. The South refused to acknowledge the day, honoring their dead on separate days until after World War I (when the holiday changed from honoring just those who died fighting in the Civil War to honoring Americans who died fighting in any war). It is now celebrated in almost every State on the last Monday in May with Congressional passage of the National Holiday Act of 1971 (P.L. 90 – 363). This helped ensure a three day weekend for Federal holidays, though several southern states have an additional separate day for honoring the Confederate war dead: January 19th in Texas; April 26th in Alabama, Florida, Georgia, and Mississippi; May 10th in South Carolina; and June 3rd (Jefferson Davis’ birthday) in Louisiana and Tennessee.

In 1915, inspired by the poem “In Flanders Fields,” Moina Michael replied with her own poem:

We cherish too, the Poppy red
That grows on fields where valor led,
It seems to signal to the skies
That blood of heroes never dies.

She then conceived of an idea to wear red poppies on Memorial day in honor of those who died serving the nation during war. She was the first to wear one, and sold poppies to her friends and co-workers with the money going to benefit servicemen in need. Later a Madam Guerin from France was visiting the United States and learned of this new custom started by Ms. Michael. When she returned to France she made artificial red poppies to raise money for war orphaned children and widowed women. This tradition spread to other countries. In 1921, the Franco-American Children’s League sold poppies nationally to benefit war orphans of France and Belgium. The League disbanded a year later and Madam Guerin approached the VFW for help.

Shortly before Memorial Day in 1922 the VFW became the first veterans’ organization to nationally sell poppies. Two years later their “Buddy” Poppy program was selling artificial poppies made by disabled veterans. In 1948 the US Post Office honored Ms. Michael for her role in founding the National Poppy movement by issuing a red 3 cent postage stamp with her likeness on it.

Traditional observance of Memorial day has diminished over the years and many Americans have forgotten the meaning and traditions of the day. At many cemeteries, the graves of the fallen are increasingly ignored or neglected. Most people no longer remember the proper flag etiquette for the day. While there are towns and cities that still hold Memorial Day parades, many have not held a parade in decades.

There are a few notable exceptions. Since the late 1950s on the Thursday before Memorial Day, 1,200 soldiers of the 3rd U.S. Infantry place small American flags at each of the more than 260,000 gravestones at Arlington National Cemetery. They then patrol 24 hours a day during the weekend to ensure that each flag remains standing. In 1951, the Boy Scouts and Cub Scouts of St. Louis began placing flags on the 150,000 graves at Jefferson Barracks National Cemetery as an annual Good Turn, a practice that continues to this day. More recently, beginning in 1998, on the Saturday before the observed day for Memorial Day, the Boys Scouts and Girl Scouts place a candle at each of approximately 15,300 grave sites of soldiers buried at Fredericksburg and Spotsylvania National Military Park on Marye’s Heights (the Luminaria Program). And in 2004, Washington D.C. held its first Memorial Day parade in over 60 years.

To help re-educate and remind Americans of the true meaning of Memorial Day, the “National Moment of Remembrance” resolution was passed in December 2000. It asks that at 3 p.m. local time all Americans “voluntarily and informally observe in their own way a Moment of Remembrance and respect, pausing from whatever they are doing for a moment of silence or listening to Taps.

For many of us that are not aware that our Republic For The United States Of America does have an Army and we must start educating ourselves about it, so that way we can BE ONE together in our communities, and thus defend ourselves against tyrants that disguise themselves as government when in truth they are NOT under any circumstances under a legal or lawful fact.

In early 1866 the United States of America — now securely one nation again — was waking to the reality of recovery from war, and this had been a much different war. In previous conflicts the care of the veteran warrior was the province of the family or the community. Soldiers then were friends, relatives and neighbors who went off to fight–until the next planting or harvest. It was a community adventure and their fighting unit had a community flavor.

By the end of the Civil War, units had become less homogeneous, men from different communities and even different states were forced together by the exigencies of battle where new friendships and lasting trust was forged. With the advances in the care and movement of the wounded, many who would have surely died in earlier wars returned home to be cared for by a community structure weary from a protracted war and now also faced with the needs of widows and orphans. Veterans needed jobs, including a whole new group of veterans–the colored soldier and his entire, newly freed, family. It was often more than the fragile fabric of communities could bear.

State and federal leaders from President Lincoln down had promised to care for “those who have borne the burden, his widows and orphans,” but they had little knowledge of how to accomplish the task. There was also little political pressure to see that the promises were kept.

But probably the most profound emotion was emptiness. Men who had lived together, fought together, foraged together and survived, had developed an unique bond that could not be broken. As time went by the memories of the filthy and vile environment of camp life began to be remembered less harshly and eventually fondly. The horror and gore of battle lifted with the smoke and smell of burnt black powder and was replaced with the personal rain of tears for the departed comrades. Friendships forged in battle survived the separation and the warriors missed the warmth of trusting companionship that had asked only total and absolute committment.

With that as background, groups of men began joining together — first for camaraderie and then for political power. Emerging most powerful among the various organizations would be the Grand Army of the Republic (GAR), which by 1890 would number 409,489 veterans of the “War of the Rebelion.”

Founded in Decatur, Illinois on April 6, 1866 by Benjamin F. Stephenson, membership was limited to honorably discharged veterans of the Union Army, Navy, Marine Corps or the Revenue Cutter Service who had served between April 12, 1861 and April 9, 1865. The community level organization was called a “Post” and each was numbered consecutivelly within each department. Most Posts also had a name and the rules for naming Posts included the requirement that the honored person be deceased and that no two Posts within the same Department could have the same name. The Departments generally consisted of the Posts within a state and, at the national level, the organization was operated by the elected “Commandery-in-Chief.”

Post Commanders were elected as were the Junior and Senior Vice Commanders and the members of Council. Each member was voted into membership using the Masonic system of casting black or white balls (except that more than one black ball was required to reject a candidate for membership). When a candidate was rejected, that rejection was reported to the Department which listed the rejection in general orders and those rejections were maintained in a “Black Book” at each Post meeting place. The meeting rituals and induction of members were similar to the Masonic rituals and have been handed down to the Sons of Union Veterans of the Civil War.

The official body of the Department was the annual Encampment, which was presided over by the elected Department Commander, Senior and Junior Vice Commanders and the Council. Encampments were elaborate multi-day events which often included camping out, formal dinners and memorial events. In later years the Department Encampments were often held in conjunction with the Encampments of the Allied Orders, including Camps of the Sons of Veterans Reserve, which at the time were quasi-military in nature, often listed as a unit of the state militia or national guard.

National Encampments of the Grand Army of the Republic were presided over by a Commander-in-Chief who was elected in political events which rivaled national political party conventions. The Senior and Junior Vice Commander-in-Chief as well as the National Council of Administration were also elected.

The GAR founded soldiers’ homes, was active in relief work and in pension legislation. Five members were elected President of the United States and, for a time, it was impossible to be nominated on the Republican ticket without the endorsement of the GAR voting block.

In 1868, Commander-in-Chief John A. Logan issued General Order No. 11 calling for all Departments and Posts to set aside the 30th of May as a day for remembering the sacrifices of fallen comrades, thereby beginning the celebration of Memorial Day.

With membership limited strictly to “veterans of the late unpleasantness,” the GAR encouraged the formation of Allied Orders to aid them in its various works. Numerous male organizations jousted for the backing of the GAR and the political battles became quite severe until the GAR finally endorsed the Sons of Veterans of the United States of America (later to become the Sons of Union Veterans of the Civil War) as its heir. A similar, but less protracted, battle took place between the Womens’ Relief Corps (WRC) and the Ladies of the Grand Army of the Republic (LGAR) for the title “official auxiliary to the GAR.” That battle was won by the WRC, which is the only Allied Order open to women who do not have an hereditary ancestor who would have been eligible for the GAR. But in this case the LGAR retained its strength and was made one of the Allied Orders.

Coming along a bit later, the Daughters of Union Veterans of the Civil War, similar to the SUVCW but for women, also earned the designation as an Allied Order of the GAR. Rounding out the list of Allied Orders is the Auxiliary to the Sons of Union Veterans of the Civil War, which is open to women with hereditary ties to a veteran or who is the spouse, sister or daughter of a member of the SUVCW.

The final Encampment of the Grand Army of the Republic was held in Indianapolis, Indiana in 1949 and the last member, Albert Woolson, died in 1956 at the age of 109 years.