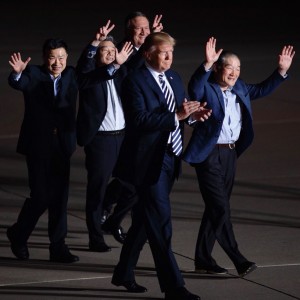 A jubilant President Trump tweeted on Thursday to announce that five of the ‘Most Wanted leaders of ISIS‘ have been captured after they were lured from Syria to Iraq with fake Telegram messages.

Iraqi officials used the cell phone of already captured ISIS lieutenant Ismail al-Eithawi to send instructions via the app for the four other leaders to come to Iraq, where they were seized.

The encrypted app was officially named by ISIS as one of its favored mobile messaging services in 2015 and has been regularly used by the terror group for private communication and to spread propaganda.

Al-Eithawi, who also uses the alias Abu Zaid al-Iraqi, was captured in February by Turkish intelligence and handed over to the Iraqis.

Eithawi was a direct aide to ISIS leader Abu Bakr al-Baghdadi, responsible for fund transfers to the group’s bank accounts in different countries.

Saddam al-Jamal, a Syrian who was accused of taking part of a massacre in the province of Deir Ezzor in 2014 which killed 700 members of a tribe that rose up against ISIS, was the second most senior member to be captured. President Donald Trump rejoiced on Thursday after Iraqi agents captured a group of high-ranking ISIS leaders. He is pictured upon arrival at Joint Base Andrews in Maryland.
Trump tweeted about the capture, which included two of the highest-ranking ISIS commanders ever to be taken alive Iraqi intelligence released images of the five men on national television on Wednesday.

Al-Eithawi and al-Jamal are the two most senior Islamic State figures ever to be captured alive.

The former served as ISIS governor in Syria’s eastern Euphrates region and as a minister in charge of the group’s so-called education department.

Al-Jamal, meanwhile, had previously been a commander in the Free Syrian Army and then leader of a western-allied ‘moderate’ Islamist group called Ahfab al-Rasoul.

This was effectively destroyed by ISIS following a military campaign, and al-Jamal reappeared in an ISIS video to say he had defected from his former group which he branded ‘stooges’ of the West, according to The London Times.

As head of ISIS in Deir Ezzor, he is accused of overseeing the murders of 700 members of the Shaitat tribe after it rebelled against ISIS.

Al-Jamal is said to have ordered the execution of children, sometimes in front of their parents. ISIS field commander Issam Abdel Kader al-Zawba’i pictured in the Iraqi National Intelligence Service news release.
The operation to snare the four was carried out in cooperation with U.S. forces, part of an American-led coalition fighting against Islamic State on both sides of the Iraqi-Syrian border.

Baghdadi declared himself ruler of all Muslims in 2014 after capturing Iraq’s main northern city Mosul.

He is now believed to be hiding in the Iraqi-Syrian border region after losing all the cities and towns of his self-proclaimed caliphate. By David Martosko and Rory Tingle For Dailymail.com

FURTHER, three Americans that were being held prisoners in North Korea have been released:
U.S. Secretary of State Mike Pompeo departed North Korea on Wednesday with three Americans the country had been holding in captivity, another sign that relations between the U.S. and North Korea are warming in advance of a first-of-its-kind nuclear summit.
President Donald Trump announced the prisoners’ release on Twitter, noting that they appeared to be in good health and applauding Pompeo’s “good meeting” with North Korean leader Kim Jong Un.

I am pleased to inform you that Secretary of State Mike Pompeo is in the air and on his way back from North Korea with the 3 wonderful gentlemen that everyone is looking so forward to meeting. They seem to be in good health. Also, good meeting with Kim Jong Un. Date & Place set.

Secretary Pompeo and his “guests” will be landing at Andrews Air Force Base at 2:00 A.M. in the morning. I will be there to greet them. Very exciting!

Pompeo’s trip to Pyongyang was timed with Trump’s declaration that the U.S. would withdraw from the Iran nuclear deal. His meeting with Kim follows the North Korean leader’s second secret trip to China.

Kim Hak-song, Kim Dong-chul, and Kim Sang-duk, who is more commonly referred to as Tony Kim, were due to arrive at Andrews Air Force Base at 2 a.m Thursday, according to Trump’s tweets.

“I will be there to greet them,” Trump tweeted. “Very exciting!”

“We are very grateful for the release of our husband and father, Tony Kim, and the other two American detainees,” the family wrote. “We ask that you continue to pray for the people of North Korea and for the release of all who are still being held.”

Tony Kim’s family has issued a statement: “We…want to thank the President for engaging directly with N. Korea. Mostly, we thank God for Tony’s safe return.”

~~~~~~~
Hak-song, who had been doing research at the Pyongyang University of Science and Technology, was detained in May 2017 and accused of “hostile acts.” Dong-chul, accused of spying, was arrested in 2015 but sentenced to 10 years of hard labor in April 2016. Tony Kim, who had been living in North Korea with his wife, taught for a time at the Pyongyang University of Science and Technology. He, too, was accused of “hostile criminal acts” against the regime and was detained in April 2017.
Trump hinted last week that the release could be imminent, tweeting that people should “Stay tuned!” There was no elaboration until Pompeo’s departure from Pyongyang on Wednesday.
~~~~~~
Trump> As everybody is aware, the past Administration has long been asking for three hostages to be released from a North Korean Labor camp, but to no avail. Stay tuned!
5:53 PM – 2 May 2018
~~~~~~
Trump’s unconventional approach to launching a dialogue with the reclusive North Korean regime consisted of wrangling with both the South Koreans and the Chinese to bring Pyongyang to the negotiating table. Pompeo also made a secret trip to North Korea prior to his confirmation, while he was still CIA director.

Trump and Kim plan to meet either this month or next in a location that has yet to be determined. Despite the fanfare surrounding the significance of such a meeting, experts have expressed caution that Kim will commit to meaningful steps toward denuclearization.

“The fact that we have the opportunity to change direction here and go in a more peaceful one and having it occur so quickly is good news,” said John McHugh, an Atlantic Council board director and former secretary of the U.S. Army. “But the lesson there is that we could very rapidly, if the upcoming summit is a failure, return to that [earlier] posture, which was an extraordinarily dangerous one.”