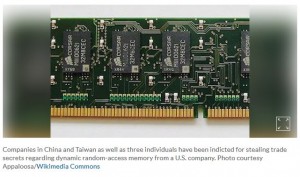 Nov. 1 (UPI) — A federal grand jury indicted companies in China and Taiwan on charges related to a conspiracy to steal trade secrets from an Idaho-based company, the U.S. Department of Justice said Thursday.

Along with the two companies, three individuals were charged with a conspiracy to commit economic espionage, among other crimes to steal trade secrets from Micron Technology, Inc., which specializes in developing and manufacturing memory products such as dynamic random-access memory, the Justice Department said.

“Micron is worth an estimated $100 billion and has a 20 to 25 percent share of the dynamic random access memory industry — a technology not possessed by the Chinese until very recently,” Attorney General Jeff Sessions said.

The indictment stated that Chen Zhengkun, aka Stephen Chen, served as general manager and chairman of an electronics corporation that Micron acquired in 2013. Chen then left to become president of a Micron subsidiary in Taiwan, Micron Memory Taiwan, which was responsible for manufacturing at least one of Micron’s DRAM chips.

During his time at UMC Chen recruited MMT employees, including fellow defendants He Jianting, aka J.T. Ho, and Wang Yungming, aka Kenny Wang who allegedly stole Micron trade secrets related to DRAM manufacturing and design for UMC.

The indictment sates Wang downloaded over 900 Micron confidential and proprietary files before he left MMT and stored them on USB external hard drives or in personal cloud storage in order to access them while working for UMC.

“We are going to do everything we can to prevent the further dissemination of the unlawful stolen property,” he said.

If convicted, each company faces forfeiture and a maximum fine of more than $20 billion, while the individual defendants face a maximum sentence of 15 years imprisonment and a $5,000,000 fine for economic espionage charges, and 10 years imprisonment for theft of trade secrets charges.