‘A calculated abuse of power': Prosecutors seek 15-20 years for ex-sheriff convicted of corruption 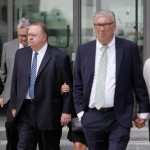 Federal prosecutors are seeking a 15- to 20-year sentence for convicted former Lake County Sheriff John Buncich, saying in court documents the severity of the charges warrants a significant prison term.

Benson, in the memorandum, raised new allegations that Buncich attempted to use a protected intelligence database to dig up information on three men poised to testify against him and could potentially pose a flight risk.

“The damage caused by Buncich’s conscience (sic) disregard and abandonment of the trust placed in him by the citizens of Lake County is severe and so should be his sentence,” Benson wrote.

Bryan Truitt, one of Buncich’s defense attorneys, did not respond to a request for comment.
A jury convicted Buncich, 72, of bribery, wire fraud and honest services wire fraud in August after 14 days of testimony. Buncich’s attorneys plan to appeal the conviction.

Buncich, former Lake County PoliceChief Timothy Downs, and William Szarmach, of C.S.A. Towing, were named in a multicount indictment in November 2016 alleging a towing scheme where the sheriff accepted bribes in the form of thousands of dollars in cash and donations to his campaign fund, Buncich Boosters, according to court records.

“As revealed at trial, Buncich accepted bribes from Szarmach even before taking office in 2011,” Benson wrote. “It is not surprising that this similar pattern of illegal conduct continued throughout Buncich’s entire reign as sheriff.”

“Buncich’s conduct is not a single isolated incident of poor decision making, but rather a calculated abuse of power over a prolonged period of time for personal enrichment,” Benson added.

The U.S. attorney’s office does not comment on matters pending before the court.
Benson said Buncich presented himself as a public official who sought to fight public corruption, according to court documents, and condemned other officials who broke the law.

“Buncich’s hypocrisy is overwhelming,” Benson wrote. “The false image he projected the entire time he himself was violating the law is disgusting and despicable.”
A pre-sentencing report indicated that the level of the offenses Buncich committed qualified for a 12- to 15-year sentence, according to the memorandum, but Benson argued to increase the range.

“The government believes that a sentence of at least the high-end of the applicable guideline is necessary to promote respect for the law and to attempt to deter others from engaging in similar criminal conduct,” Benson wrote in the memorandum. “Buncich’s criminal conduct spans several years, involved other high-ranking Lake County public officials, and resulted in incredible damage and embarrassment to the Lake County Sheriff’s Department and the Lake County Democratic Party.”

Benson said in court documents that an immediate remand is needed because of the length of the sentence Buncich is facing; the former sheriff’s access to cash assets; alleged violation of bond conditions; his training and experience as a law enforcement officer; and contact with a federal fugitive.

“Given Buncich’s age, a sentence imposed at this level raises serious doubts as to Buncich’s desire to appear to serve out this sentence,” Benson said.

Benson said it appears that Buncich had access to large amounts of cash, according to court documents, and his law enforcement training could realistically make it easy for him to flee undetected.

Buncich, through Facebook, was in contact with Frank Kollintzas, the former East Chicago councilman who fled to Greece after being convicted in the 2003 “sidewalks for votes” scandal in 2005. He is still wanted by federal authorities and was in contact with Buncich both before and after the former sheriff’s conviction, according to court documents.

Kollintzas fled to Greece and was later sentenced in absentia.

Benson alleged the former sheriff violated the conditions of his bond by committing perjury during his August trial.

“The audacity of his incredulously false statements is only a reflection of the immense hollowness of his character,” Benson wrote. “Given the preposterous nature of this claim, the jury correctly determined Buncich’s guilt.”

Benson said, in court documents, that the alleged perjury could justify the revocation of bond.

“Perhaps even more pertinent, Buncich’s attempted use of the countywide law enforcement intelligence database against government witnesses is as repugnant as it is concerning,” Benson wrote.

Buncich allegedly asked a police commander to give him access to an intelligence database in an effort to get information on Downs, Szarmach and a confidential federal source, according to court documents, but the officer rebuffed the requests.

“It is clear that this conduct, on at least two occasions, placed high-ranking lifelong police officers in the difficult position of stopping their boss from further obstruction of justice conduct,” Benson added. “Additionally, this conduct caused the entire computer database to be shut down so that no law enforcement officers could access it.”

Benson said Buncich’s conviction is just the latest in a string of corrupt officials in Northwest Indiana.

“Buncich continues this abysmal saga of corrupt politicians in Lake County, except in this case, the damage is exponentially increased,” Benson wrote. “Buncich held not only the highest political position in Lake County, Democratic Party chairman, but also the county’s highest and most trusted law enforcement position, elected sheriff.”