By Kathianne Boniello, published on New York Post, on October 10, 2020

As many as 50,000 alleged sex-abuse victims are expected to go after the Boy Scouts of America in court ahead of a November legal deadline, as a shocking new study concludes scouting just isn’t safe for kids.

Since the Boys Scouts of America’s February bankruptcy filing, about 35,000 alleged victims across the nation have filed claims, with “thousands” more emerging each week ahead of the Nov. 16 deadline.

“People are just coming forward in droves,” said lawyer Andrew Van Arsdale, whose AVA Law firm has joined with two other firms to create the coalition Abused in Scouting.

“It’s three to four times the claims filed in all the Catholic bankruptcies combined,” Amala said.

The study, to be released next week, shows more than 70 percent of alleged victims were abused multiple times, with more than 50 percent of the incidents taking place at Scout camps and nearly 100 percent of victims suffering lifelong consequences, including alcohol and drug problems, post traumatic stress disorder, difficulties holding down jobs and intimacy issues.

Accused abusers threatened their victims more than half the time, while 45 percent groomed victims with gifts, and 63 percent gained the trust of victims’ families, the study found.

70 percent of alleged victims were abused multiple times, with more than 50 percent of the incidents taking place at Scout camps

“Scouts is mistaken in their belief that teaching a child to build a fire or earn a badge is equivalent to situational strength,” the researchers wrote, noting that allowing kids to go with strangers into the woods without parents, safe places or law enforcement “creates repeated instances in which children are susceptible to abuse.”

“It’s highly problematic,” she said, adding, “It’s so important that parents have the facts, and if they have the facts they’ll do the right thing.”

Child USA social scientist and researcher Carter Timon said, “Most people do not know that claims of sexual abuse are rarely, rarely false.”

In scouting, the overwhelming majority of abuse perpetrators — 82 percent — are adults, with just 3.8 percent being youths themselves, said Timon, who added that typically one-third of child sex abusers are kids.

Calling the finding “surprising,” Timon noted, “there’s something going on in this setting that makes it way more likely for adults to abuse a child than is typical.”

Victims, on average, were abused around the age of 12, and took nearly 30 years to come forward — including one former Scout who first revealed his abuse when he was 94, Timon said.

“These people are suffering, most of them for their whole lives,” he said.

It’s a story Jeff Williams, 49, can relate to. He was just 9 when he was abused for two years by an assistant scout leader in his native Ohio. Now a married father of two who has filed against the Boy Scouts in bankruptcy court, he urged others to come forward.

“There’s safety in numbers. … We all share a story,” he said. “It’s tremendous to know you’re not floating out there alone.”

The Boy Scouts says it  is “committed to compensating victims through its restructuring,” and said the study information was “unverified.”

The group says it has banned one-on-one interactions between adults and scouts since 1987, and done criminal background checks since 1994.

According to its own research, 90 percent of Boy Scouts abuse claims occurred “more than 30 years ago,” said the organization, which calls the safety of children its “most important priority.”

The Boy Scouts also called for a federally overseen national database for all youth-serving organizations, to prevent abusers from going from one organization to another. 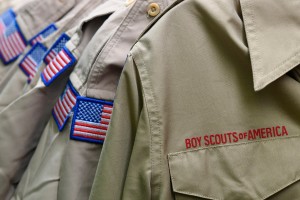 A Child USA study of reported sex abuse in the Boy Scouts found: