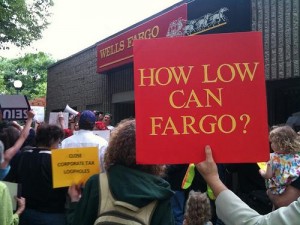 Wells Fargo Forced Unwanted Auto Insurance On 800,000.
One year after Wells Fargo was busted in the biggest post-financial crisis scandal, when Warren Buffett’s favorite bank was exposed for fraudulently “cross-selling” bank products, including creating millions of credit cards and bank accounts to its customers that were never requested, and which cost the former CEO his job, Wells has just been busted yet again for another major scandal: the NYT’s Gretchen Morgenson writes that more than 800,000 people who took out car loans from Wells Fargo were also charged for auto insurance they did not need, and some are still paying for it, according to a 60-page internal report prepared by Oliver Wyman for Wells execs.

The report, which was prepared by the consulting firm Oliver Wyman, looked at insurance policies sold to Wells customers from January 2012 through July 2016. The insurance, which the bank required, was more expensive than auto insurance that customers often already had obtained on their own.

Wells Fargo automatically imposed the insurance through its Dealer Services unit. Its website says it has more than four million customers and provides a variety of banking services to 14,000 auto dealers around the nation. It says the company’s lender-placed auto insurance “may be considerably more expensive than insurance you can obtain on your own.” The NYT adds that “such policies typically cost more than $1,000 a year, not counting interest. (Customers could pay them in full or finance them over time.) If a car was repossessed, the bank might charge a reinstatement fee of as much as $500, so a borrower could face $1,500 in charges.”

It gets better: the expense on the unneeded insurance (which covered collision damage) has pushed some 274,000 Wells Fargo customers into delinquency and resulted in almost 25,000 wrongful vehicle repossessions. And the cherry on top: “among the Wells Fargo customers hurt by the practice were military service members on active duty.”

Not even bothering to lie, when asked about the revelations in the Wyman report, Wells officials confirmed that the improper insurance practices took place but said the bank was determined to make customers whole.

“We have a huge responsibility and fell short of our ideals for managing and providing oversight of the third-party vendor and our own operations,” Franklin R. Codel, the head of consumer lending at Wells Fargo, said in an interview. “We self-identified this issue, and we made the right business decisions to end the placement of the product.”

In other words, oops: we were busted for doing almost the exact same thing a year ago and we swore it would never happen again, but now that it has happened again, we will make everyone whole, promise.
National General Insurance underwrote the policies for Wells Fargo, which began to require the insurance on auto loans as early as 2006, according to the NYT. The practice continued until the end of September.

And here is the punchline in the upcoming congressional hearings where Elizabeth Warren will make sure more top-level execs will lost their jobs: for borrowers, delinquencies arose quickly because of the way the bank charged for the insurance. The NYT gives the following example:
Say, for example, that a customer agreed to a monthly payment of $275 in principal and interest on her car loan, and arranged for the amount to be deducted from her bank account automatically. If she were not advised about the insurance and it increased her monthly payment to, say, $325, her account could become overdrawn as soon as Wells Fargo added the coverage.

As a result, the report estimated that the bank owed $73 million to customers who were hurt as a result of this grossly fraudulent practice.

The laws broken by Wells in this latest fiasco were many but the most notable one is that state insurance regulations required Wells Fargo to notify customers of the insurance before it was imposed something the bank rarely did according to the report said. And almost 100,000 of the policies violated the disclosure requirements of five states — Arkansas, Michigan, Mississippi, Tennessee and Washington.

As for the reason why Wells stock will get pounded tomorrow, the report also found that borrowers sustained financial damages beyond the costs of the insurance. The harm also included repossession costs, late fees, charges for insufficient funds and damage to consumers’ credit reports. In other words, Wells has just opened itself to mass, and open-ended litigation which could run well into the billions.
The mechanics of the fraud:
Here is how the process worked: When customers financed cars with Wells Fargo, the buyers’ information would go to National General, which was supposed to check a database to see if the owner had insurance coverage. If not, the insurer would automatically impose coverage on the customers’ accounts, adding an extra layer of premiums and interest to their loans.

When customers who checked their bills saw the charges and notified Wells Fargo that they already had car insurance, the bank was supposed to cancel the insurance and credit the borrower with the amount that had been charged.

Iin some cases the bank did just that. In most cases, nobody noticed and the scheme continued: “The Oliver Wyman report indicated that many customers appear not to have notified Wells Fargo of the redundant insurance. This may have been because their payments were deducted automatically from their bank accounts and they did not spot the charges.”

According to documents on a Wells Fargo website titled “understanding your auto loan,” the bank had strict rules about the order in which it would apply a customer’s car payment to costs associated with the loan: First to be deducted from a payment would be the interest owed on the car loan. Then the bank would deduct interest charged on the lender-placed insurance. The third deduction would be principal on the loan, followed by the amount of premium owed on the insurance.

This payment structure had the effect of increasing the overall interest borrowers paid on their loans, the Oliver Wyman report noted, because fewer dollars went to reducing the principal outstanding.

“We take full responsibility for these errors and are deeply sorry for any harm we caused customers,” said Jennifer Temple, who then tried to non-GAAP the bank’s liability, saying the bank had determined only 570,000 of its customers may qualify for a refund and that just 60,000 customers in the five states had not received complete disclosures before the insurance placement. Finally, she said, the bank estimated the insurance may have contributed to 20,000 wrongful repossessions, not 25,000.