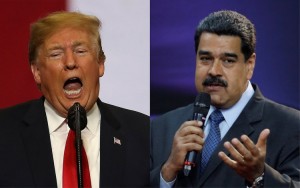 Venezuela’s Vice President Delcy Rodriguez has denounced what state media is describing as a ship seizure by the US in the Panama Canal Wednesday.

The ship is reportedly packed with 25 thousands tons of Soya and was entering the narrow vital central America waterway, when its progress was halted in an event which Maduro government officials have condemned as a “serious aggression” that impedes the country’s “right to food”.

Though in the initial hours of Wednesday’s allegation major international media outlets had yet to confirm the claim, Rodriguez tweeted a statement, saying, “Venezuela denounces before the world that a boat that holds 25 thousand tons of Soya, for food production in our country, has been seized in the Panama Canal, due to the criminal blockade imposed by Donald Trump.”

Venezuela calls on the UN to stop this serious aggression by DonaldTrump’s govt against our country, which constitutes a massive violation of the human rights of the entire Venezuelan people, by attempting to impede their right to food,” the vice president added.

State media subsequently explained that the undisclosed owner of the vessel was informed by the insurance company that it must cease moving the cargo through the canal.

The serious allegation comes after on Monday President Trump signed an executive order imposing a full economic embargo against Venezuela after a week ago the White House began signaling the US would seek to “quarantine” and fully “blockade” the Maduro regime if the socialist leader doesn’t immediately hand over power of his own accord.

The executive order freezes all government assets in the United States and prohibits all transactions by any Venezuelan officials, in what constitutes the first major expansion of sanctions targeting a nation in the western hemisphere in over three decades.

“The Maduro regime now joins that exclusive club of rogue states,” Bolton said at a one-day conference in Peru of more than 50 governments aligned against Maduro. — AP

“We are sending a signal to third parties that want to do business with the Maduro regime: Proceed with extreme caution,” Bolton said on Tuesday in Peru. “There is no need to risk your business interests with the United States for the purposes of profiting from a corrupt and dying regime.”

The executive order states, “All property and interests in property of the Government of Venezuela that are in the United States … are blocked and may not be transferred, paid, exported, withdrawn, or otherwise dealt in.”

Given the new sanctions by US Treasury fall short of a full trade embargo, the US is not outright targeting urgent supplies like food, thus it’s not clear whether the alleged halting of the Soya transporting ship is the result of direct US action.

However, it’s likely that maritime insurance companies and private shipping firms will become increasingly skittish in dealing with Venezuela.