The Ain Dara Temple and the Giant Footsteps of the Gods 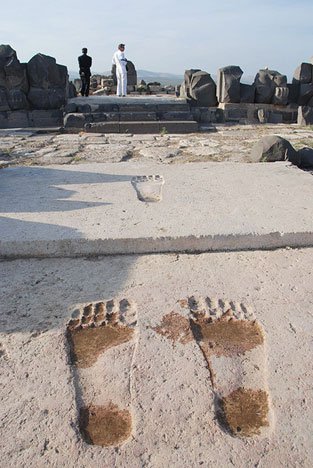 Ain Dara is a small village in the northwest of Aleppo, Syria, which boasts a remarkable structure – the Ain Dara Temple, located just west of the village.  The temple was discovered in 1955, when a colossal basalt lion was found, quite accidentally, in fact. Following this find, excavations were carried out in subsequent years.

The Ain Dara Temple is an Iron Age Syro-Hittite temple. The Syro-Hittites or Neo-Hittites were a group of political entities that emerged towards the end of the 2nd millennium B.C. Following the collapse of the Hittite Empire, there was a power vacuum in the Eastern Mediterranean. The Syro-Hittite states filled this vacuum and became the dominant power in the region until their conquest by the Neo-Assyrian Empire at the end of the 8th century B.C.

Although the Syro-Hittites are today distinguished from the Hittites, the former probably did not see themselves as different from their predecessors. This can be supported by the epigraphic evidence and the cultural continuity of the region. For instance, the styles of temples built during the Late Bronze Age continued into the Early Iron Age. One of these temples, believed to have been built during the Early Iron Age, was the Ain Dara Temple.

To enter the temple, one would first have to go through a courtyard built with sandstones and paved with flagstones. A chalkstone basin, perhaps for ceremonial purposes is seen there. The temple, measuring 30 x 30 metres and facing southeast, stood on a 2.5-foot-high platform made of rubble and limestone and was lined with basalt blocks engraved with lions, sphinxes and other mythic creatures. A monumental staircase, flanked on each side by a sphinx and two lions, led up to the temple portico.

After the portico, one would reach the middle room, which measured 6 x 15.5m, followed by the main hall, which was 16 x 16m in size. At the end of this hall was the inner room/sanctum. The cult statue was probably housed in a niche in the back wall of the sanctum.   The building was once covered with rows of basalt reliefs of sphinxes, lions, mountain gods and large clawed creatures whose feet alone remain.
One of the interesting features of the Ain Dara Temple is the footprints carved into the stone floor of the temple. One pair of footprints can be found on the floor of the portico, followed by a single footprint, and another single footprint at the threshold of the main hall. The distance between the two single footprints is about 30 feet. A stride of 30 feet would belong to a person (or ‘god’) about 65 feet tall. 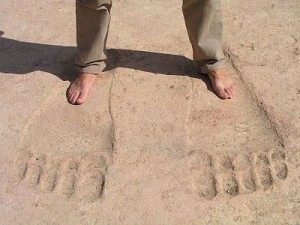 It is not suggested here that the footsteps are real imprints made by a large person walking over the threshold of the temple, but rather that they were carved by the creators of the temple. The question is, why? 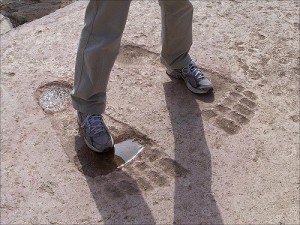 It is still unknown whose footprints these were meant to represent.  Some scholars have suggested they are animal prints, while others have suggested they depict the footsteps of the gods. Perhaps, these footprints (measuring about a metre in length) were meant to be an iconic representation of the resident deity. These footprints may have been carved to show the presence of the resident deity as he/she entered his/her temple and approached the throne in the inner sanctum.

Another interesting feature about the Ain Dara Temple is its similarities with the biblical description of the Temple of Solomon in Jerusalem. It has been claimed that these two temples were similar in their floor plan, age, size and decoration.

Before jumping to the conclusion that one temple influenced the other, it should be mentioned that there are also temples in that region that are comparable to both the Ain Dara Temple and Solomon’s Temple. These temples include that of Ebla, Emar, and Munbaqa. Therefore, it may be suggested that these temples belonged to a wider cultural tradition that dominated the region during that time.