Let there be light

FIAT LUX is Latin for “Let There Be Light.”

This phrase does not represent the light of God, Sun or the Stars, but the light of man who is made of all. Man is just the one who wields the power of FIAT LUX here on earth as the creator and shepherd to his fellow brothers. 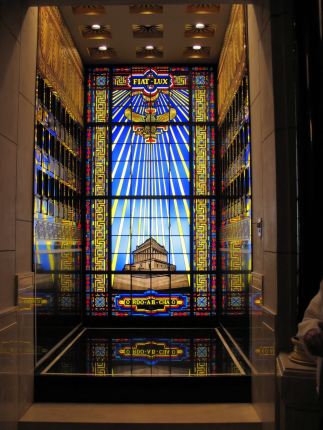 The phrase comes from the third verse of the Book of Genesis. In the King James Bible, it reads:

The key in understanding FIAT LUX is this explanation below:

Since fiat lux would be literally translated as “let light be made” (fiat is from fieri, the passive form of the verb facere, “to make” or “to do”), an alternative Latinization of the original Greek and Hebrew, lux sit (“light – let it exist” or “let light exist”) has been used occasionally, although there is debate as to its accuracy.

The translation above clearly states that fiat is from fieri and where we get the passive form of the verb facere, which is “to make” or “to do.” It is us Brothers and Sisters who define fiat lux by what we create in this world in order “to make” or “to do.” We are the ones who are charged with the God given task of bringing light to this world of darkness by what we create. Nothing more and nothing less. Yes, we are the light bearers who are the morning stars (Lucifers) and our jobs are to make this world a more beautiful place with the illumination of our creations via fiat lux.

Saint John the Scot explains how the creation of man, though placed last, has the priority over all, and is implied in the fiat lux, since all things are created in man, who is the image of God, by the identification of the Logos with human nature 1200 years ago;

In dealing with the third class Scotus follows the narrative in Genesis, interpreting it, of course, in a figurative sense throughout, as many of the Fathers, whom he cites at great length, had done before him, though his interpretations are often his own. Thus the fiat lux means the procession of the primordial causes into form and species such as are capable of recognition by the intelligence1. The gathering together of land and water is the imparting of form to unstable matter. The creation of man, though placed last, has the priority over all, and is implied in the fiat lux, since all things are created in man, who is the image of God, by the identification of the Logos with human nature.

In its simplest form, fiat lux is what man creates using his mind and or hands, and that without man, these “creations” would not see the light of day.

The most important point to understand what this means, is that “ALL THINGS” that are created by humans. Yes, even the most darkest and evil creations are considered fiat lux. Yes, even the dark business that we know as the he Church of Satan™ is made of God and the light, but they are our adversary that this Lucifer hopes to turn uprite their Baphomet that they have basically highjacked from the Brotherhood in order to cash in on it by turning it upside down and then trademarking it under the Church of Satan™.

What else would you expect from our adversaries who we all know as those sneaky lil devilish Bastards of Satan. Let it be said that even the darkest of man made creations will always burn in the lake of fire when the true shining sons of the light  illuminate the truth in order to educate those Satanists who have given their souls to the dark. These are now the days of Lucifer who has come to destroy this dark matter in order to bring on the light of heavenly kingdom promised to us that has no place for Satan’s workers. I would assume they didn’t figure that someday we Saints would come back marching in and Lord, we are in that number!

And just FYI, last time I checked, Aliester Crowley and Anton Lavey were no Saints in my church