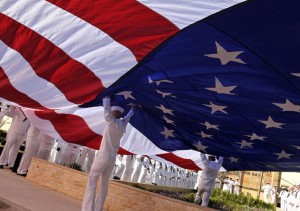 : Love. Peace. Respect. + Protection for our Soldiers+ our Flag+ our Country+ our People.

CNN- in case you forgot, it is Flag Day! You know who didn’t forget? President Trump.

It’s also his birthday. The President and the American flag are each celebrating another year of life — a throwback Thursday for them both. 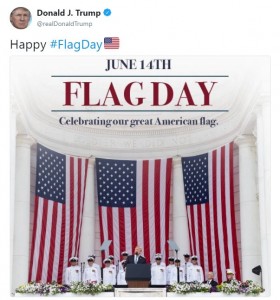 New York and Pennsylvania were some of the early states to recognize Flag Day celebrations, and private citizens lobbied for a national observance. According to the Department of Defense, the “first unofficial national Flag Day” occurred on June 14, 1877. 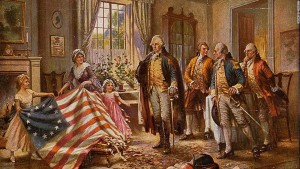 Following the hallmark year of 1776, the US got its first official flag.

It was on this day in 1777 that the Flag Resolution stated: “Resolved: that the flag of the United States be made of thirteen stripes, alternate red and white; that the union be thirteen stars, white in a blue field, representing a new Constellation.”

The 13-star flag became associated with Betsy Ross, a rendering of whom you can see above with George Washington. It should be noted that there’s no definitive evidence to show that Ross did in fact create the first iteration of Old Glory, but I’m not going to complain about a woman being featured prominently in the lore of an important moment in American history.

The stripes borrowed from the Grand Union flag of the Continental Army, which itself had been inspired by the stripes in the flag of the Sons of Liberty. The 13 stripes continue to pay tribute to the 13 original colonies.

As the country grew, so did the number of stars on the field of blue, which required subsequent flag acts. The star-spangled banner of National Anthem fame had 15 stars on it. In 1912, President William Howard Taft signed an act dictating the stars’ pattern, with President Dwight D. Eisenhower tweaking the arrangement to provide for the addition of Hawaii and Alaska to the United States