How Smartphone Light Affects your Brain and Body 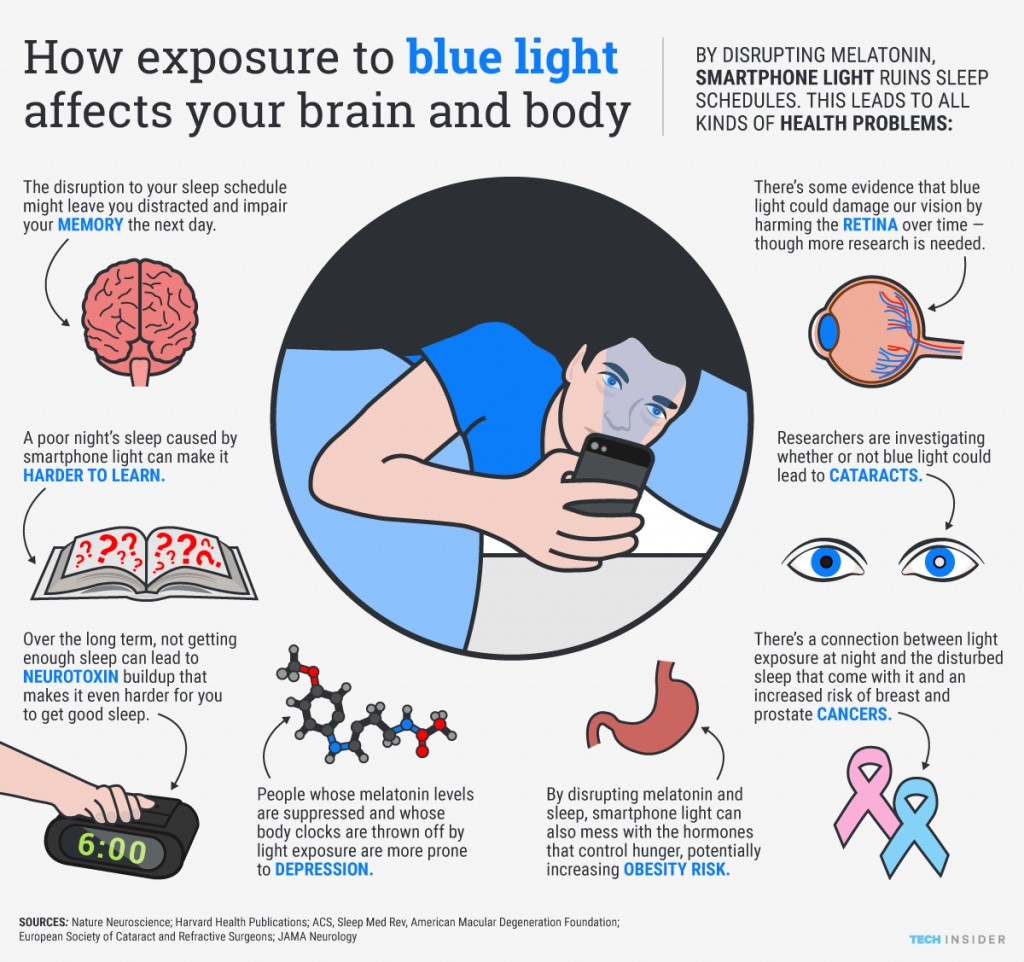 You might not know this, but your smartphone emits a bright blue light which allows you to read what’s on the screen even during the brightest points of the day. But the light doesn’t turn off or adjust according to the hour of the day; it’s continually emitted, not only by our smartphones, but by our laptops, televisions, and other devices as well. The problem is that this light, which mimics the brightness of the sun, confuses your brain into thinking it’s daytime, even during the dead of night. This in turn stops your brain from releasing melatonin, the hormone which induces sleep, and prevents you from falling asleep. This is why experts recommend to turn off all screens at least two hours before bed.

Melatonin is released by a tiny organ in your brain called the pineal gland a couple of hours prior to sleep. The science of why the blue light emitted by mobile devices keeps people awake has led to the discovery of a photoreceptor called Melanopsin. Though we’ve long been familiar with the various cones and rods that construct our vision, Melanopsin was discovered recently in retinal ganglion cells, which are sensitive to blue light. Since then, experimental research has found that the average person using mobile devices before bed may have difficulty falling and/or staying asleep.

The impact of blue light is even more significant for teenagers, who are more vulnerable to the effects of light than adults. This is because circadian rhythm naturally shifts during adolescence, causing teenagers to feel more awake late into the night. Starting up a video game or television show just before bedtime could be enough to push sleepiness away for another hour or two, making early mornings particularly difficult.

Blue Light Isn’t The Only Concern

Dr. Martin Blank from the Department of Physiology and Cellular Biophysics at Colombia University has joined a group of scientists from around the world who are making an international appeal to the United Nations regarding the dangers associated with various electromagnetic emitting devices, like cellphones and WiFi.

There are multiple concerns with these devices, including their link to cancer. More concerning still is the fact that a child’s brain absorbs up to four times as much radiation as that of an adult, and children today are growing up with these devices in hand. You can read more details about this HERE.

Our love for our screens is in itself a problem. In China, screen addiction is actually considered a clinical disorder, and as a result a number of rehabilitation centres have been established where young people addicted to screens are completely isolated from all media. Although the success of these treatment centres has yet to be established, their necessity paints a dark picture of the technological age in which we live. (source)

What You Can Do

The first thing you can do is limit your screen time before bed, turning all screens off at least two hours before you plan to fall asleep. This is the perfect time to catch up on your reading.

You can also download an app called f.lux, which adjusts the colour of your computer’s display to the time of day — warm at night and brighter during the day — and cuts the blue light being emitted. There are similar apps for phones as well. All of us here at CE use these apps and have really noticed an improvement in our sleep quality.

HERE is a page from their website that provides more research into what staring at screens can do to your sleep, as well as the science behind the f.lux app.

Regardless of whether you are worried about your sleep, we can all benefit from a daily break from our smartphones and other screens.

You may also read: