BIBI TO PRISON: SHOOT HIM: DESTROY HIM: ALL ACCOMPLICE-CONS WORLDWIDE

Thousands of Israelis took to the streets of Tel Aviv calling for the resignation of Prime Minister Benjamin Netanyahu over corruption charges.

The so-called ‘March of Shame’ attracted more than 10,000 people on Saturday, Ynet News reported. The protestors on Tel Aviv’s Rothschild Boulevard chanted “Shame, shame, shame,” “Bibi Netanyahu to Maasiyahu Prison,” and “We will not give in until you give up.”

For the second week in a row: many (possibly tens of) thousands demonstrating in Tel Aviv against government corruption. Calling to end Netanyahu rule.

Netanyahu has been questioned in two cases, with poilce suspecting the PM of received lavish gifts from businessmen and negotiating a deal for more favorable coverage with a newspaper owner.

The PM, meanwhile, was on his way to France to meet President Emmanuel Macron, with his impending arrival spurring a massive anti-Netanyahu rally in Paris. 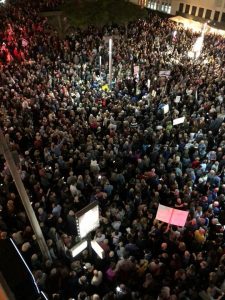 Thousands of people protested in the French capital in solidarity with the Palestinians, who are outraged by US President Donald Trump recognizing Jerusalem as the capital of Israel. They carried Palestinian flags, slammed the Israeli PM as a “war criminal” and chanted:”Boycott Israel” while voicing support for a “Third Intifada.”

Meanwhile, violent clashes continue to rock East Jerusalem, the West Bank and Gaza in the wake of Trump’s announcement Wednesday. Two Palestinians were killed and over a 1,000 people injured Friday, with another 230 wounded Saturday, as Israeli security forces fired tear gas, rubber bullets and live ammunition at the protesters.

Time to Wake the Fuck Up! Destroy all that is destroying the Creation: our people: Our vital resources:

~ – = For we the people consciously unite as ONE FORCE can destroy NOW what no longer serves  the greatest good.

~ – = For we the people are the power that Be: We are our own creators: We have spoken.

~ – = For Be health, and abundance for our daily needs for everyone worldwide: NOW!