Why Would Catholic Bishops Pray for the Death of America? 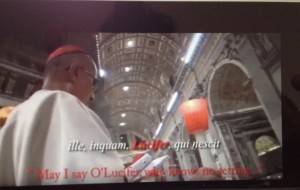 Pope Francis, a Vicar of Satan pretending being a Christ Sending Vicar, when the facts are he is a terrorist commanding to kill Americans; our children, and the invasion of countries.

Why Would Catholic Bishops Pray for the Death of America?

Today, it has been reported that Catholic Bishops are “praying for the death of America”—- and I have been asked why?

To put it bluntly and succinctly, they would pray for the death of America because they have been cheating, bilking, enslaving, and robbing Americans for 150 years—–and they got caught.

We have the records, we have the mechanisms, we have the documentation. We have the proof that the Roman Pontiffs and the British Monarchs have conspired against us in Breach of Trust and commercial contract since 1822.

Now they owe us reparations they cannot ever hope to pay, their reputation as a religious organization is in tatters, and so they pray for the death of America because that means the death of their Priority Creditors.

They are praying for this evil to the “gods” of the “Kingdom of God” whose names are variously called “Mammon” on the land, and “Marduk” in the air, and “Satan” on the sea, but they will be disappointed because Mammon has been recognized as nothing but sideshow fakery, Marduk is dead, and Satan is bound.

It’s the Kingdom of Heaven that has won the toss, and now all their “Kingdom” is forfeit for a thousand years. Naturally, they are gnashing their teeth and wailing and hoping for a supernatural saving event that will prevent the entire world from knowing the truth about them and what they have been hiding like a cancer in the bowels of the Roman Catholic Church.

They are afraid, quite rightly, that this denouement, this “apocalypse” of the apostate pagan “church” within the actual Church will be the doom of all their effort and the end of their control of humanity worldwide.

This is really not news. The Paradigm Project foreclosed on them years ago from an accounting and commercial process standpoint. I and my team brought the claim against them from the side of the True Law. Now they are well and truly stuck. They’ve been overcome in Common Law, in Commercial Law, and in Ecclesiastical Law, too.

All that they schemed in secret is known. All that they did against the True One in Heaven. All the lies. All the evil. It’s all known down to a gnat’s eyelash. And instead of repenting and confessing their sins, the one thing that they have taught others to do and which even now could save them, they pray for evil instead— for the death of the nation they have abused and defrauded and betrayed in Breach of Trust and commercial contract. Their very prayers are acts of Dishonor.

The Doctrine of Scarcity is overturned and it will not be reinstated. Their lust for blood and war and injustice and the death of innocence is denied. They are turned aside and nobody will obey them anymore, for fear of the Living One.

The Americans caught on and by the grace of the True Lord, have claimed control of the entire Unum Sanctum Trust—- purely for the purpose of instituting the Doctrine of Abundance, introducing people to the simple Law of Heaven, and doing away with the evil ideas and motivations which have deluded, defrauded, and destroyed people for over 8,000 years.

It’s over. The Stumbling Block of Dan will be tied around their necks. Those who do not fully repent the evils that this “church within the Church” has wrought will inherit the Abyss and no longer be protected by the sign of Cain.

In a twinkling, they will be gone from this Earth as if they never were. And we will not remember them nor will we regret their passing.