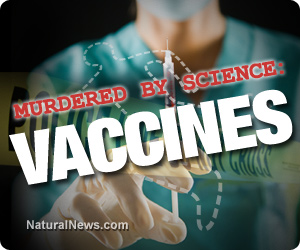 We’ve been for years bringing awareness to people about the FDA, which literally is a criminal agency that decided to EXISTS in other to take advantages of our vulnerability. These psychopaths’ criminals Nazis, cunningly not only infiltrated our health but our way of living with zillion of agencies running from Washington DC (their main headquarters), and calling themselves “the people government” not only here in this country  but worldwide.

But the good news are, is that we are very well aware of their intentions, and I do not think that we are going back to BE the little vulnerable “WE” that we were before, which is why we are watching you collapse each day!

We must bring awareness to everyone so we can be at peace doing what we need to do without worrying of what we are eating, drinking, and breathing! Our health is our responsibility, not that of a fucking agency, or a doctor that could care less if we live or die. By now you should be well informed of not vaccinating your children, taking any Flu shots, or going to see a doctor to prescribe you a little toxic pill or injection for every breath you need to take in order for you to feel better.

Educate yourself. Do your own research, and only keep in mind to use the doctor only in case of an emergency like a broken leg, accident, etc, etc. Watch what you ingest! Eat lots of raw food, and be happy!

(NaturalNews) Yet another vaccine researcher has been caught faking research on a bogus AIDS vaccine, adding to the pattern of scientific fraud and criminality that characterizes the modern-day vaccine industry. Dr. Dong-Pyou Han from Iowa State University has resigned this week after admitting he spiked rabbit blood samples with healthy human blood to falsely show the presence of antibodies that would “prove” his AIDS vaccine worked.
The National Institutes of Health (NIH) was so convinced by the fraud that they gave Han $19 million in research funding. The NIH later found the fraud after attempting to replicate Han’s work and figuring out something was terribly wrong with the research.

Newly-released federal documents reveal the stunning breadth of the fraud. As the findings state:

[The investigation] found that the Respondent falsified results in research to develop a vaccine against human immunodeficiency virus-1 (HIV-1) by intentionally spiking samples of rabbit sera with antibodies to provide the desired results. The falsification made it appear that rabbits immunized with the gp41-54 moiety of the HIV gp41 glycoprotein induced antibodies capable of neutralizing a broad range of HIV-1 strains.
A summary of the fraud was also posted on RetractionWatch.com, a site that frequently posts details of Big Pharma research fraud.

Han’s $19 million vaccine research fraud eerily resembles the vaccine industry fraud exposed by former Merck virologists Stephen Krahling and Joan Wlochowski. In a little-known False Claims Act filing, these two scientists accused Merck of spiking mumps vaccine blood tests with animal antibodies in order to make the vaccines appear to be effective.
This fraud is what allowed Merck to falsely claim its mumps vaccine is 95% effective, say the scientist whistleblowers. In reality, the fraudulent Merck mumps vaccine actually contributed to the spread of mumps across America, they explain.

The spread of mumps, of course, results in more people buying mumps vaccines. This is how scientific fraud can produce enormous profits for vaccine companies. In many cases, vaccines actually spread the disease they claim to prevent.
The fact that an AIDS vaccine research has now been caught faking his bogus AIDS vaccine in precisely the same way Merck scientists say Merck faked their vaccine tests is yet another significant red flag that screams the obvious: the vaccine industry is riddled with scientific fraud.

No punishment for scientific fraud

For being caught stealing $19 million in taxpayer grant money and faking AIDS vaccine research, Dr. Dong-Pyou Han is merely barred from receiving government contract money for the next three years.

No jail time. No criminal charges. Not even an effort to force him to repay the funds he essentially stole.

Pfizer has also admitted to committing felony crimes, yet all these companies — GSK, Pfizer, Merck and more — remain free to do business with the very same governments they routinely defraud.
In the vaccine industry, fraud is part of the corporate culture, and it’s found in the fraudulent science, drug price fixing, widespread bribery of doctors, the faking of “scientific” evidence and the industry’s payoffs to the mainstream media in the form of advertising money.

Nearly all vaccines are founded on fraud

Now you understand why most vaccines don’t work. Flu shots don’t prevent the flu. Mumps and measles vaccines actually cause mumps and measles. Polio vaccines cause widespread paralysis and polio-like symptoms. It is an historical fact — a fact the CDC has desperately tried to cover up — that 98 million Americans were injected with polio vaccines laced with cancer-causing viruses. The CDC recently scrubbed this historical information from its website in part of a revisionist history scheme. It is also a fact that former Merck scientists Dr. Maurine Hilleman openly admitted — on tape! — that vaccines contained huge numbers of cancer-causing “stealth” viruses. Click here for the shocking transcript of the recording by Dr. Hilleman.

Here’s just a small snippet of that transcript:

Dr Maurice Hilleman: Well, that was at Merck. Yeah, I came to Merck. And uh, I was going to develop vaccines. And we had wild viruses in those days. You remember the wild monkey kidney viruses and so forth? I told Bill Mann, I said “look, I got a problem and I don’t know what the hell to do.” Bill Mann is a real bright guy. I said that these lousy monkeys are picking it up while being stored in the airports in transit, loading, off loading. He said, very simply, you go ahead and get your monkeys out of West Africa and get the African Green, bring them into Madrid unload them there, there is no other traffic there for animals, fly them into Philadelphia and pick them up. So we brought African Greens in and I didn’t know we were importing the AIDS virus at the time.

Miscellaneous background voices:…(laughter)… it was you who introduced the AIDS virus into the country. Now we know! (laughter) This is the real story! (laughter) What Merck won’t do to develop a vaccine! (laughter)

Even vaccines that might actually work are intentionally laced with aluminum, MSG, mercury and formaldehyde

Just to make sure vaccines are as destructive as possible, the vaccine industry makes sure that nearly all vaccines are laced with neurotoxic chemicals.
As Natural News has repeatedly reported, even the CDC continues to admit that vaccines are intentionally formulated with MSG, formaldehyde, mercury and aluminum.

When it comes to vaccines, you see, it’s all based on fraud. Logic and science are thrown out the window. Efficacy is utterly abandoned. Vaccines never need to prove they actually work. They are accepted as a matter of faith by the followers of the reductionist medical cult known as “western medicine.”

No one is allowed to question vaccines using any scientific questioning. No one is allowed to compare vaccinated children to unvaccinated children and compare the outcomes. Anyone who dares to conduct research on the dangers of vaccines is immediately and permanently denied funding by the NIH, a taxpayer-funded group that actually pays the vast majority of Big Pharma’s R&D costs.

When it comes to vaccines, you see, the entire medical system has gone stark raving mad… quite possibly because they’ve vaccinated each other and are quite literally suffering from chronic mercury poisoning (which damages the brain). The actions of this fake AIDS vaccine researcher aren’t even unusual: they’re par for the course. This is how nearly all vaccines get made! It’s the only way to make deadly, contaminated genetic cocktails appear to be effective when they really aren’t.

Take away the fraudulent research and the vaccine industry collapses overnight. If subjected to the scrutiny of rational science, vaccines would almost immediately be declared quackery.