Proof of Life Without Government 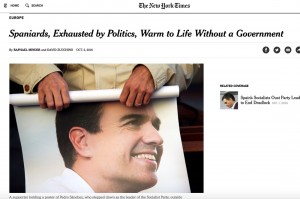 Can humanity thrive without government? Of course it can. But the masses in America apparently need proof, so here it is. According to Ecosnippets.com and the New York times, Spain has been without a national government for nine months now—and loves it!

And not only are the people getting along swimmingly, but the economy is improving as well, writes Max Moffett for Vox.com: “….political vacuum has provided Spain with cover for widely exceeding deficit targets set by the European Commission, which polices policy in the eurozone but has refrained from penalizing Spain. ‘Not having a government in the present situation has prevented the commission from being tough on austerity, and this has been good news for Spain,’ says Paul De Grauwe, a professor at the London School of Economics.”

So…what is the easy fix for a dysfunctional…oh, let’s be honest…criminal government? Get rid of it altogether!

For more learning= navigate these links: