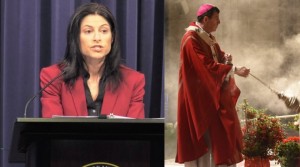 Detroit and other state dioceses leave many unanswered questions about pederast priests.

Nessel is the state’s new attorney general and called her first press conference since taking office in January to discuss the three investigations her office is working on: clergy abuse, the Flint water crisis and Dr. Larry Nassar at Michigan State University (MSU).

It was the first statewide raid conducted on the Catholic Church in American history.Tweet

Church Militant aired a video report about the event, explaining that “the investigation is far bigger than most know, involving not only all seven dioceses, where priests were shuffled from one diocese to another, but multiple states as well, since abusive clergy were also moved out of state.”

It was a special treat for me to attend this rarest of press conferences, representing Church Militant with Niles. The press conference was a very big deal, but also in a sense anti-climactic.

First, one cannot underestimate the unprecedented scope of what is happening. Not only has the top prosecutor in Michigan said publicly that the Catholic Church is a “criminal enterprise,” but this is the first time in history the Church has been under this kind of scrutiny.

Without any notice, at the same time one morning October last year, 70 officers with the Michigan State Police and 14 state assistant attorneys general raided all seven Michigan dioceses: Detroit, Saginaw, Lansing, Marquette, Gaylord, Kalamazoo and Grand Rapids. In addition to chancery headquarters, offices in multiple other diocese-related buildings, including Sacred Heart Seminary in Detroit, were raided.

It was the first statewide raid conducted on the Catholic Church in American history.

Nessel said her staffers are now poring over hundreds of thousands of pages from Church files and working on more than 300 tips from the public, many of them victims of clergy abuse.

So far, she said, there is evidence of cover-ups of clergy abuse in most Michigan dioceses, and there will likely be more than 1,000 victims identified.

She encouraged anyone who has been abused or who has witnessed or knows about clergy abuse to report that abuse to her office using the state’s clergy abuse hotline, rather than going to Church officials, and has also asked each diocese to suspend its own internal review process until the state’s investigation is complete.

“Every report will be analyzed factually and in-depth,” Nessel said, adding that if abuse does not rise to the level of a crime, information gained from research into that particular event could be used to pursue other incidents. “You still might be able to help others,” she noted.

She also indicated that non-disclosure agreements (NDAs) signed by some victims in the past to settle abuse lawsuits or complaints are not necessarily binding if they’re part of a settlement for a crime: “NDAs will not protect the Church.”

When asked by Church Militant when the final report will be issued, she estimated it will take about two more years. She declined to say whether prosecutions will take place before the close of the investigations, but her primary goal is to remove known priest-predators from ministry immediately, regardless of the statute of limitations.

When asked twice about how she anticipates dealing with priest-abusers who are elderly, Nessel was straightforward. “It doesn’t matter who they are or how old they are; if we can show a crime was committed,” she made clear they will be prosecuted.

Most telling, was her response to Christine Niles’ final question of the whole press conference: What about bishops and others who enabled the predators? Will you also go after them?

Nessel carefully nuanced her response, saying that her staffers are going to examine every case carefully and “if we can show a crime was committed” every effort will be used to achieve justice: “Nothing is off the table.”

Nessel challenged the dioceses to set up a fund for victims to be administered by the attorney general’s office so that victims may receive help for trauma they have experienced.

Most of the Q&A period of the press conference dealt with the Flint water crisis, perhaps because at this stage of the Catholic clergy sex abuse scandal, the outcomes of investigations have become predictable: the same basic storyline, only with different names of victims, bishops, priests, lawyers and the lay enablers who are invariably on the bishops’ payroll.

‘If we can show a crime was committed,’ every effort will be used to achieve justice: ‘Nothing is off the table.’Tweet

Many are no doubt expecting the final report to be a kind of remake of some not-so-old old movies and updated local history.

As one who has covered the sex scandals in Michigan for local and national media for 39 years, here are only a few of the big Michigan abuse cases Nessel and her staff will surely research and provide information the Church refuses to provide:

For those new to the sex-scandals mess, the basic outline of the saga is revealed in several films and documents. Among the films, the best include The Boys of St. Vincent (1994), Calgary (2014) and Spotlight (2015).

Buried in my files is a news article about his death noting he died of AIDS, but his name is not listed on the Detroit archdiocese’s list of ‘priests credibly accused of abuse.’Tweet

Dozens of legal reports are out there, but the 2005 Philadelphia Grand Jury report is all you need to read to learn how the Catholic Church rolls.

In response to our query, Dan Olsen, spokesman for Attorney General Dana Nessel, told Church Militant her office must decline to answer the question whether a bishop or his staffers might be guilty of obstruction of justice for a crime of sex abuse if the individual predator who was protected is deceased or the statute of limitations has run out.

“We cannot give additional information as it might jeopardize the extent of any investigation,” Olsen said.