Message to Humanity from the Angel of Renewal and Restoration 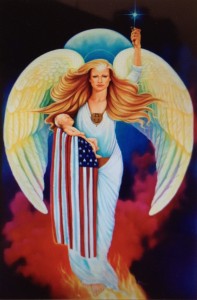 Message to humanity from the Angel of Renewal and Restoration of the Government of the United States of America, and the world.

The Angel of Renewal and Restoration has joined with the Legions of Light who are holding the sacred space for the manifestation of Divine Government in the USA and for Planet Earth. These selfless Messengers of God have given us the following Invocations and asked that we recite them daily through this election cycle according to the inner promptings of our Heart. Together, with one-pointed consciousness and with Divine Intentions, we will clear the way for Divine Government in the United States of America and around the world.

I AM my I AM Presence, and I AM One with the I AM Presence of all Humanity. As One Breath, One Voice, One Heartbeat, and One Energy, Vibration and Consciousness of Pure Divine Love…

I invoke the great Beings of Light associated with Divine Government to this planet, and I invoke the Beloved Ascended Masters guarding the evolutions of Earth.

Blessed Ones, blaze the Sacred Fires of God’s Perfect Will, Divine Love and Divine Illumination in, through and around every person involved with the governments of Earth at national, state and local levels.

Blaze the Sacred Fires of God’s Will, Divine Love and Divine Illumination in, through and around the electorate and governmental officials of all nations.

Let them feel and tangibly experience the Power, Wisdom and Love Nature of our Father-Mother God flowing through them as they elect their governments and vote on all issues before them.

SEAL this activity of Light in the Immortal Victorious Threefold Flame anchored within the heart of every person on Earth. Expand this Light daily and hourly a thousand times a thousandfold.

VICTORY IS OURS IN LOVE GOVERNING THIS PLANET!
(repeat 3 times)

And so it is, Beloved I AM.

In the Name of the Presence of God, I AM, and through the magnetic power of the Sacred Fire pulsating in my heart and the hearts of all Humanity…

I invoke the Elohim of Purity and all of the Legions of Light associated with Cosmic White Lightning of Purification.

I invoke Archangel Michael and all of the Legions of Light associated with his Sword of Blue Flame.

I invoke ALL of the Angelic Legions associated with the strength and purity of God’s Will, Divine Love and Infinite Wisdom.

I invoke Saint Germain and all of the Legions of Light associated with the 5th-Dimensional Crystalline Solar Violet Flame of God’s Infinite Perfection.

Beloved Ones, come forth NOW…and blaze your radiant Flames of Light with the power and might of a thousand Suns in, through and around…

(1) All of the embassies, chanceries, consulates and all offices of the international representatives in Washington, DC.

(3) Blaze this Divine Light through the State Department, the White House and the Executive Office Building.

(4) Blaze the Light of a thousand Suns through the Pentagon, all military bases and every office and business concerned with military affairs in any way.

(5) Blaze the Light of a thousand Suns through the Supreme Court and the entire Judicial System in the United States of America.

(5) Expand this Sacred Fire now through all of the remaining Departmental Offices of Government in the United States of America.

(6) Now Blessed Ones, expand, expand and expand this activity of Light. Traverse the planet North, South, East and West, and blaze these powerful, purifying Flames in, through and around ALL governmental and military buildings throughout the world.

Purify and transmute every electron of precious Life energy associated with the governments and military forces on this planet that are not reflecting Oneness and the Reverence of ALL Life.

Now, I ask the I AM Presence of every government official and employee to PURIFY (repeat 3 times) the consciousness and the mind of that person.

Replace all negative thought patterns with Divine Consciousness and the desire to manifest God’s Will—in ever-expanding action—until the reality of Divine Government is firmly established in the heart and mind of every person on Earth.

Close in upon and TRANSMUTE anything that is hindering the expansion of God’s Divine Plan for the governments of the United States of America and the world.

TRANSMUTE (repeat 3 times) ALL that is not of the Light cause, core, effect, record and memory before it can act, manifest or longer be sustained.

TRANSMUTE (repeat 3 times) ALL negativity into the pure Light of the Immortal Victorious Threefold Flame and the Twelve 5th-Dimensional Crystalline Solar Aspects of Deity. I accept this call fulfilled as God’s Most Holy Name, I AM. And so it is.

Gratitude to the Angel of Renewal and Restoration:

Mighty Angel of Renewal and Restoration, in grateful humility I acknowledge your Presence in the Universe and the tremendous service you are rendering to Planet Earth and her evolutions.

I ask you to SEAL all governments on the planet within a constant outpouring of your 5th-Dimensional Crystalline Solar Flame of Renewal and Restoration, until all Life is purified, restored, renewed and manifesting God’s Plan for Divine Government on the New Earth.

I consecrate and dedicate my Heart Flame to be the Open Door through which the purifying process of this Sacred Fire will constantly flow, to restore all Life evolving on this sweet Earth into God’s Infinite Perfection. And so it is, Beloved I AM.

The Real student of Light faces the Light and sends the Light before him.

My blissed I AM Country!

The Light of God that never fails.

The Cup that holds the Christ-Light that will light the planet wide.

America, my love for thee, let her freedom reign without divide.

The name AMERICA is an anagram for the I AM RACE. The Divine Intent of this name represents a race of God Conscious people comprised of ALL races, ALL nationalities, ALL cultures, ALL religions, ALL creeds and ALL Lifestyles. A race of people who are functioning within the full embrace of their I AM Presence reflecting Oneness, Divine Love, Reverence for ALL Life, and decisions and actions that perpetually reflect the highest good for ALL concerned. And we quote.

Our Country and or our Republic of the united States of America is Governed by the Laws of :

The Declaration of Independence -1776

The Article of Confederation – 1777

The Constitution FOR the united States of America – 1788

The law of ONE

~we the people together we stand as ONE for all